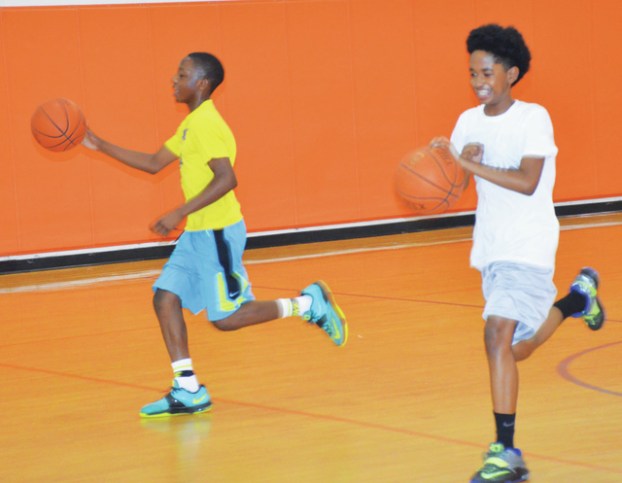 They’re back in business Vin Sparacio (back right), the head coach of the Sound Doctrine Christian Academy boys’ basketball team, hosted a camp this week at the Mike Daniel Recreation Center. Sparacio was at the helm as the program restarted last season. Kevin Eckleberry | Daily News It’s back and going strong.

After a few years away, the Sound Doctrine Christian Academy boys’ basketball program returned last season with a bang.

The team attracted some high-profile players, including power forward Shantrez Davis, who has signed with Texas Tech.

This week, the team’s coach, Vin Sparacio, has been working with a slightly younger group than he’s accustomed to.

Sparacio is hosting four youth basketball camps this summer at the Mike Daniel Recreation Center, and the second of those camps wrapped up on Thursday.

“We’re happy with the turnout we had,” Sparacio said. “We had 18 kids the first week, and 20 the second week. And hopefully we’ll get a better turnout the next two weeks, get the turnout a little bit more.”

After the camps are done, Sparacio will turn his attention full-time to the Sound Doctrine team as it heads into a new season.

The team will begin practicing in the middle of August, with the first game set for early in November.

As was the case last season, the team will spend a lot of time on the road playing in tournaments across the country designed to showcase the players.

Sparacio has traveled a long way to help build the program.

He’s a native of New York, and before coming to LaGrange, he was the head coach at Rise Academy in Philadelphia.

“I’ve done it a while up in Philadelphia, and then I took off a year and went home to New York, and came down,” Sparacio said.

While a lot of the players on last season’s team were from Georgia, Sparacio brought a handful of them in from other parts of the country.

“Our team, it wasn’t just Georgia kids here,” Sparacio said. “We had two kids from Minnesota, Kansas, Lousville, Ky., and New York, New Jersey. We brought them all into the program.”

Most of the players from last season’s team graduated, so there are plenty of holes to fill.

“We only have two returning, a freshman and a sophomore from in state,” Sparacio said.

Sparacio said he isn’t having any problems bringing in a talented group of new players, and he’ll be on the road in July looking to add to the roster.

“My goal for Year 2 is to really focus on Georgia guys, and keep the talent in state,” Sparacio said.

Sparacio said one of the biggest benefits for the players is the exposure they’ll get playing in marquee tournaments that are heavily attended by scouts.

“We play a national schedule, and that helps a lot,” he said.

Sparacio said he is committed to Sound Doctrine and he’s looking forward to seeing what the program can accomplish.

“It’s a small school, a nice foundation,” Sparacio said. “We want to help expand it. That’s the goal.”

From the mat to the ring

Isaac Figueroa, a former wrestler at LaGrange High, helped out at a local wrestling camp on Wednesday. Figueroa has been... read more