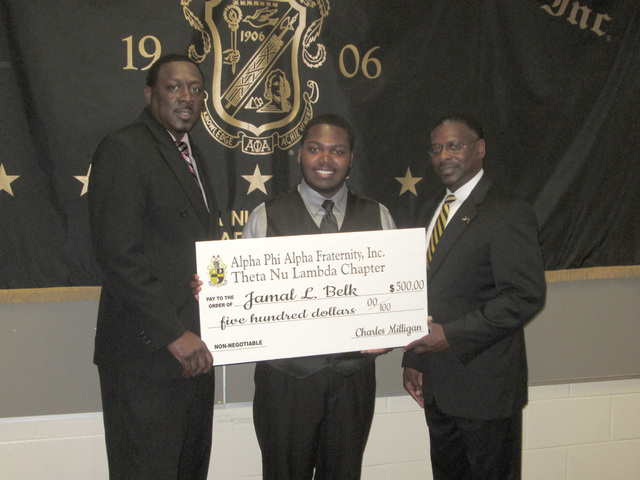 “We had several applicants and we interviewed several of them,” said Louis Shepard, professor of criminology at West Georgia Technical College and member of Alpha Phi Alpha. “We judged them based on their involvement in the community, their SAT scores and ACT scores.”

Jamal Belk, a LaGrange High School alumni, took the second place prize of $500. Members of the fraternity who judged the applicants said that there was virtually no difference between the first and second place winners and that they were both equally impressive young men.

“It was a very tough choice to pick the first and second place recipients,” said Shepard. “We tried to pick the best of the best in the interview process.”

Belk said that he plans to attend the University of Georgia in the fall. He served as band member for the LaGrange High marching band and hopes to become a member of the UGA Redcoats marching band.

“I’m going to UGA to study agriculture and animal science, and begin a career as a veterinarian,” said Belk. “I chose UGA because they have a state-of-the-art facility for their program, and because it’s close to home.”

Belk said that he will be a member of the Minorities in Agriculture, Natural Resources and Related Sciences, or MANRRS program, which is a program for minority students who are interested in studying agricultural science.

“They just got a new veterinary facility a few years ago and I think I’ll enjoy it there,” said Belk. “The staff seemed very inviting and they seemed like they really wanted me there.”

Alton West, director of community development for the city of LaGrange, is also a member of the fraternity. West said that the group of applicants for the scholarship had many exceptional students from the area’s schools.

“The students that won this year’s scholarships are both great young men, but we had a lot of others that made it very difficult to choose the winners,” said West. “We’re proud to have students like these in our community.”