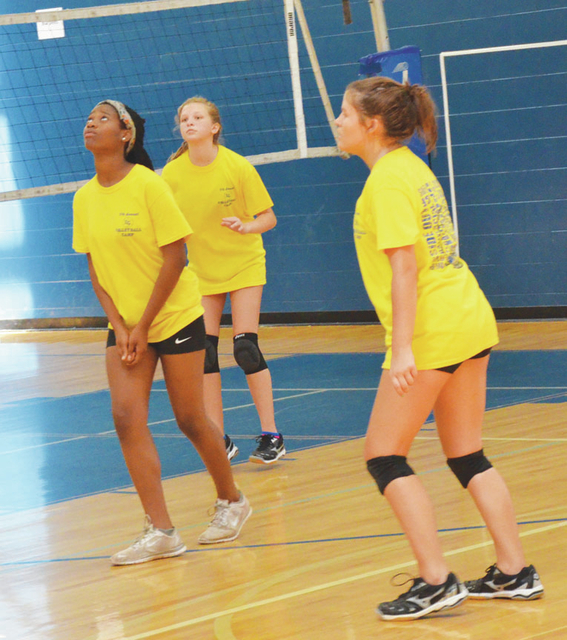 Dozens of players participated in the LaGrange High volleyball camp that wrapped up on Wednesday. Kevin Eckleberry | Daily News The LaGrange High volleyball camp included players from Callaway High and LaGrange. Both teams are gearing up for a season that begins in August. Kevin Eckleberry | Daily News

Every bit of experience helps.

That’s the viewpoint of LaGrange High volleyball coach Angie Newton, who hosted a camp this week that included players from her team as well as Callaway High.

The camp, which was held in the secondary gym at LaGrange High, kicked off on Monday and wrapped up on Wednesday.

“This is the fifth one we’ve done at LaGrange,” Newton said. “We had a pretty good turnout, although this year isn’t as big a turnout as some of the past years.”

While the numbers may not have been as great as past years, Newton said the skill level was higher than it’s ever been among the campers.

“One thing about this group, it’s a little bit more of an experienced group than in the past,” Newton said. “In the past, our camp had a lot of campers that never touched the ball. We’ve only got three or four of those. They’ve all either played at the middle school level or high school.”

Volleyball is a fall sport on the high-school level, and LaGrange’s first game is just two months from now.

To help prepare for the season, LaGrange hosts its own camp, and many of the players will also be participating in a camp at Callaway High in July.

Newton said the LaGrange camp provides valuable experience, “and it helps us raise money for our program. And that helps. But the main thing is to get our kids in here.”

Callaway has been participating in the LaGrange camp since its inception.

“Callaway has always brought anywhere from five to 10 kids, almost every year we’ve done it,” Newton said. “The Callaway coaches have always wanted to bring them, and Callaway is having Point University come over in a couple of weeks, so we’ll try to get our girls over there.”

Newton said she always enjoys doing things in conjunction with the other coaches in the county.

“We want to build volleyball in this whole entire area,” Newton said. “If we don’t work together, it’s not going to grow.”

Newton is hoping her team will enjoy a successful 2015 season.

LaGrange didn’t qualify for the state tournament last season, and it will try to make that a reality this fall by finishing among the top four teams in Region 1-AAAAA.

The Lady Grangers have many players back from last season’s team, although Newton said there is still a lot of inexperience.

Newton said the program will benefit from the presence of Scott Lewis, who will be a full-time assistant coach this season.

“He’s been doing some travel and club ball and stuff,” Newton said. “His daughters go to LaGrange, so he started helping two years ago. Now we’ve got him certified to be a community coach, so he’s my assistant. It’s just been me, and maybe some years have a JV coach. For me to have an assistant coach and a JV coach, we’re growing a little bit. We’re moving in the right direction.”