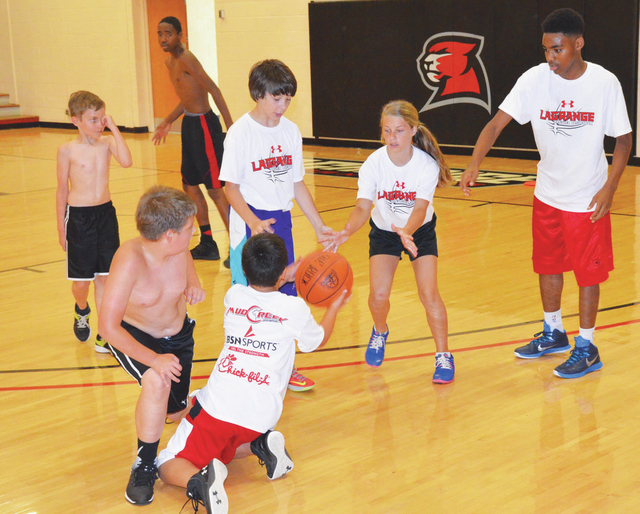 The LaGrange College basketball camp was held this week, and it went from Monday through Thursday. The camp was put on by LaGrange College coaches, including head coach Kendal Wallace. Kevin Eckleberry | Daily News The LaGrange College basketball camp wrapped up on Thursday, with dozens of boys and girls participating. Kevin Eckleberry | Daily News

These are good times for the LaGrange College men’s basketball program.

The Panthers have won back-to-back conference championships, and they’ve made two consecutive appearances in the NCAA Division III national tournament.

As he kept an eye on things during the LaGrange College youth basketball camp on Thursday, Wallace said he’s striving to create more “consistency” when it comes to his team.

“I’m looking for consistency,” said Wallace, who is heading into his fifth season as the Panthers’ head coach. “We haven’t been consistent game in and game out for four years. I want a team that’s going to come and show up every night, and do well every night, and try to win 20 games.”

Wallace spends plenty of time trying to figure out a way to propel the program to the next level.

This week, though, Wallace has been primarily focused on helping dozens of boys and girls learn about the game and have an enjoyable week at the camp.

The camp kicked off on Monday and wrapped up on Thursday.

“It went real well,” Wallace said. “It is fun. We always do a camper of the week, we do a free-throw champion, a hot-shot champion. We try to give each one of them something throughout the week.”

Wallace and the other coaches served as instructors, and some players new to the program were also lending a hand.

Since Wallace started running the camp, he has had his incoming freshmen serve as instructors.

“We try to get them up here so they can kind of get acquainted a little bit,” Wallace said. “They’ve done a real good job.”

Those freshmen will be joining a team that has cut the nets down at the past two USA South tournaments.

During the 2014-2015 season, the Panthers needed a late surge in the regular season just to qualify for the conference tournament.

The Panthers entered the tournament as the number six seed, and they went out and beat Piedmont, Methodist and Maryville to secure the championship.

LaGrange College then lost to Whitworth in the first round of the NCAA tournament.

Nick Mitchell was the MVP of the past two conference tournaments, but he was a senior last season, so he has moved on.

Mitchell led the Panthers in scoring and rebounding last season, and Wallace said he’ll be hard to replace.

“Losing Nick Mitchell is tough,” Wallace said. “I wish I could keep that guy together.”

Despite losing Mitchell, the Panthers should be an extremely dangerous team next season.

Among the players returning is senior Mark Wagner, who was the second leading scorer last season.

“Mark Wagner, Mike White and Braxton Ford, those three guy are going to be seniors,” Wallace said. “They’re going to be good leaders.”

Wallace said that Wagner, a sharp-shooting guard, should be poised for a breakout season.

“Mark is a very good player,” Wallace said. “He’s kind of been in the shadows of other players. The first year it was Denzel (Robinson), and Kyron Anderson was here for a little bit. Mark has kind of just played a role. He’s really more of a prime-time player. He needs to have the ball in his hands a little bit more. We plan on doing quite a bit of that this year, let Mark take control a little bit.”

Also returning is junior Justyn Olson, a former LaGrange Granger who was the Panthers’ third-leading scorer a year ago.

With a talented group of newcomers joining the veterans, Wallace has plenty of confidence about the prospects for the 2015-2016 season.

“Through the spring, we did a real good job of recruiting,” Wallace said. “I think we’ll be as good or better than we were last year.”