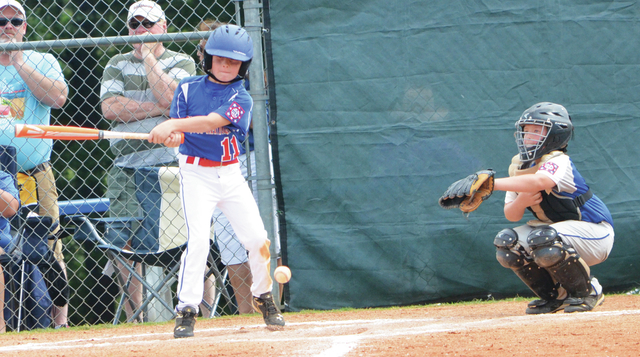 MANCHESTER – After losing two heart-breakers to begin their stay in the state tournament, the Troup National all-stars found themselves in a 6-0 hole in their third game.

A seven-run inning gave Troup National a 7-6 lead, and the team held on for a 10-9 victory over Grayson on Saturday.

Troup National then completed its stay in the Dixie Youth Baseball 7-8-year state tournament with a 12-2 win over Lamar County on Sunday.

Troup National finished with a 2-2 record in the 15-team tournament.

The top finishers in each of the three five-team pools advanced to the state semifinals, along with the top team that didn’t win its pool.

Although Troup National isn’t one of the teams moving on, it was still an outstanding finish to the tournament after the two tough losses.

After falling to Jones County 11-10 on Friday, Troup National fell to Baconton 11-8 in its first game on Saturday, all but ending its chances of advancing to the final four.

Grayson then jumped out to a 6-0 lead over Troup National, but everything changed in the second-to-last inning.

“We were down 6-0 with two outs in the fifth inning,” Troup National coach Jamie Bozeman said. “We came back and took the lead 7-6, and we won that game. These kids, the resolve they have, the never-quit attitude, I love them the death.”

On Sunday, Troup National had its only suspense-free game of the tournament when it thumped Lamar County 12-2.

After falling behind 6-0 in its third game, Troup National outscored its two opponents 22-3 the rest of the way.

Troup National, which went 1-2 in the district tournament the weekend before state, would have been a tough out in the final four, but it wasn’t meant to be.

“It’s ashamed, because now they’re gelling,” Troup National coach Rusty Taylor said. “If we could have one more weekend, we could play with anybody right now. District we weren’t really gelling, but now, they’re gelling.”

Despite that disappointment, Taylor said he and the other coaches were extremely proud of the effort of the players.

“They were down 6-0 in that one game, and they fought hard,” Taylor said. “We’re so proud of them. I love them to death.”

Bozeman knew his team was going to have its hands full after getting a look at the bracket.

“We had the toughest pool,” Bozeman said. “Of the five teams in the pool, we had three district winners.”

Jones County, the team that beat Troup National on Friday, went on to win the pool with a 4-0 record.

Troup National and Baconton finished tied for second at 2-2, Grayson was 1-3, and Lamar County was 0-4.

Bozeman said the players did an outstanding job of representing Troup County.

“One thing we did, is we made it special for them,” Bozeman said. “We told them after that second loss, we stood one of the kids up, and we said, take a look at this uniform, take a look at this hat, take a look at the pants, the belt, the name written across the chest. There are 12 people who get to wear this jersey. You’re representing yourself, your team, your family. They took it and they ran with it, and the played hard for it.”