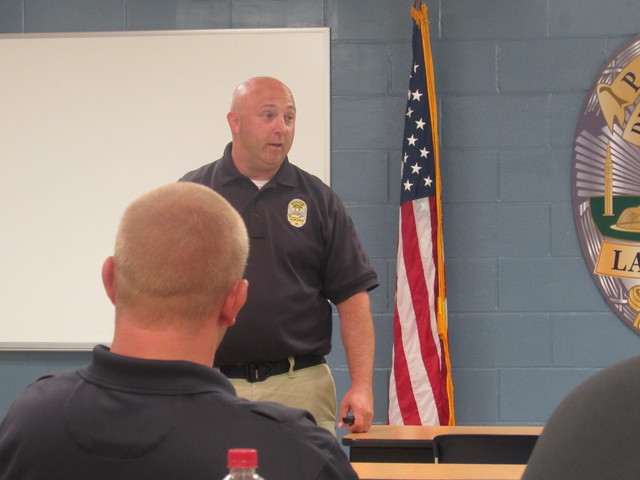 LaGrange Public Safety Chief Lou Dekmar addresses the recruits at the LaGrange Police Department training center during one of their classroom sessions on policy and procedures.

http://lagrangenews.com/wp-content/uploads/sites/37/2015/07/web1_WEB0707Recruits11.jpgLaGrange Public Safety Chief Lou Dekmar addresses the recruits at the LaGrange Police Department training center during one of their classroom sessions on policy and procedures. LaGrange Police Department recruits listen during training. Four recruits had two weeks of ‘pre-academy’ work at the LPD training center. On Monday, they went to the police academy in Columbus and will spend 11 weeks training.

http://lagrangenews.com/wp-content/uploads/sites/37/2015/07/web1_WEB0707Recruits21.jpgLaGrange Police Department recruits listen during training. Four recruits had two weeks of ‘pre-academy’ work at the LPD training center. On Monday, they went to the police academy in Columbus and will spend 11 weeks training. Lt. Eric Lohr, LaGrange Police Department training coordinator, speaks to recruits. He has worked with four recruits for four weeks on a gun range, driving course and in the classroom, going over topics such as unethical versus ethical conducts for police officers, constitutional policing and accountability. Recruits also receive a book on how becoming an police officer may affect them emotionally or affect their families.

http://lagrangenews.com/wp-content/uploads/sites/37/2015/07/web1_WEB0707Recruits31.jpgLt. Eric Lohr, LaGrange Police Department training coordinator, speaks to recruits. He has worked with four recruits for four weeks on a gun range, driving course and in the classroom, going over topics such as unethical versus ethical conducts for police officers, constitutional policing and accountability. Recruits also receive a book on how becoming an police officer may affect them emotionally or affect their families.

LaGRANGE — It is one of the toughest jobs in the country right now; even the opportunity to put on the badge is no easy task.

Just ask the some of the new recruits hoping to become LaGrange Police Department officers.

Russell Sharman was a sergeant first class E7 in the Army. He recently retired after serving 21 years, deploying to places like Iraq and Afghanistan. He wanted to find a new way to still serve his community a little closer to home.

“I’ve always heard good things about LPD,” he said. “Now, being here, I’ve got nothing but good things to say about them. Hands down, everyone seems to enjoy their job. Morale is high and everyone is very positive.”

David Brewer, 26, of Opelika, Alabama, worked at a Walmart Distribution Center. He applied to LPD last August, took the test in October and was put on a waiting list. He got the call to come to training in May.

“I wasn’t expecting a call anymore,” Brewer said. “I was talking to the National Guard and was about to turn in my papers. They (LPD) called the day before … I was so happy.”

Donald Howse has been a part of the Alabama National Guard for 16 years and just recently switched his major to criminal justice at Columbus State University.

LaGrange Public Safety Chief Louis Dekmar said some current employees may move laterally into those positions, while others will be chosen from a new crop of recruits.

The current recruits include three men and one woman, three of whom have some military training. Being recruited is a rigorous process, Dekmar said, beginning with prospective officers filling out a 41-page application before they can be invited to become a recruit.

Dekmar said about 50 percent of the applicants will continue on after the application process, which begins with two days of testing. Those tests include an oral board interview in front of a panel of officers and investigators, a written test, an essay, typing test, physical agility test and the “Cooper Fitness Assessment,” where participants must complete a certain number of push ups, sit ups and a timed mile-and-a-half run.

After that, selected candidates are also subject to a polygraph and background checks, and a drug screening.

Those who make it through head to the LPD training center for two weeks before being sent to the police academy in Columbus.

Lt. Eric Lohr, LPD’s training coordinator, has been overseeing training for the current batch of recruits. He said they were trained on a gun range and driving course during the first week. The second week focused on classwork, mainly learning LPD’s policies and procedures like constitutional accountability and ethical versus unethical behavior for law enforcement officers.

Those topics and continual training of policy and procedure are now more critical, Lohr said, after public incidents involving police use of force against residents in Ferguson, Missouri, New York City and Baltimore, Maryland. Those events, which incited violent reaction in the aftermaths, have brought negative attention to law enforcement agencies across the nation.

“When you look at what’s going on around the country – Ferguson, things like that – we need to make sure the people we have are prepared … to step into their role in our society,” Lohr said of the recruits. “Knowing their constitutional rights, ethics – not just about use of force and weapons, but understanding what their role is in society. And not just for next week, but for their entire career.

“If we did not spend time to make sure an officer is successful in (training), how can we make them successful on the streets? It would do them a great disservice and a disservice to the community.”

The negative light shed on law enforcement officers made an impact on the recruits as well.

“I’d be lying if I said I haven’t thought about it,” said Howse, referring to the negative perception. “Do I want to put myself in a position where there’s a lot of turmoil right now? Just from the outside looking in, doing community policing, it’s building that trust. That’s where I think a lot of law enforcement agencies have broken down is in community policing.

Added Brewer: “It makes me think I need to take all this very seriously, so I don’t do the same thing. I need to be extra focused.”

Sharman said the negative publicity is something he also experienced while in the military, but it isn’t changing his mind about wearing the badge.

“When you had one bad soldier, that was always highlighted, but never the 10 to 12 good soldiers doing good things. So (negative stories) won’t deter me,” he said.

The recruits on Monday went to the police academy in Columbus, where they will train for the next 11 weeks as a probationary employee with LPD.

Lohr said the real challenge for the recruits begins when they return to LaGrange for 15 weeks of field training programming. That is when the trainees will be paired up with an LPD officer and hit the ground running – patrolling the streets, responding to calls, writing reports, performing community outreach services, plus continued training and learning LPD policies and procedures.

At the end of the 15 weeks, the recruits have one last “test”: an exit interview with chief Dekmar. Only about three out of 100 people successfully make it completely through all of the training in the application process, the chief noted.

But the recruits said they are up for the challenge and ready to hit the streets of LaGrange with their new uniform and badge.

“I want to set a good example,” said Brewer. “I want to be the officer that when they see me, they know I’ll treat them fairly and with respect. That’s the goal I’ve set for myself.”