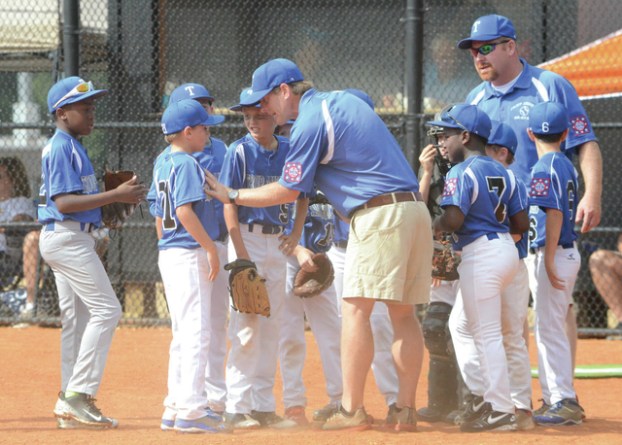 LAGRANGE – It took a remarkable final-inning comeback for Troup American to secure its spot in the state tournament.

The situation was extremely desperate for Troup American in an elimination game against Thomaston in the 9-10-year-old Dixie Youth Baseball district tournament at the Harris Baseball Complex.

Heading to the sixth and final inning, Troup American trailed 12-6, and it needed to score at least six runs to keep the game, and its season alive.

Troup American got those six runs and one more to claim a dramatic 13-12 victory.

Troup American went on to fall to Troup National in the championship game, but it earned a place in the state tournament by finishing in the top two in the district.

Troup American is one of 15 teams that will be playing in the state tournament that begins today in Manchester, and those teams are all playing for one berth in the Dixie Youth Baseball World Series.

Each of the teams in the state tournament will be divided into a five-team pool, and there will be three different pools.

The three pool winners, plus the best team among the non-pool winners, will move on to the final four next weekend in Manchester.

The state champion will play in the World Series in Lexington, S.C. beginning on Aug. 7.

First up for Troup American will be a game against Columbia County today at 7:40 p.m.

Troup American’s final tournament game will be against Bleckley County on Sunday at 2:50 p.m.

At the district tournament, Troup American lost both of its games to Troup National, and in between those games it beat Thomaston in dramatic fashion.

With the game tied at 12-12, Grady Westomoreland came through with the game-winning single to secure Troup American’s state berth.

Ridge Purcell will be taking a break from his work with the local First Tee program this week to play... read more