Working hard in the summer sun 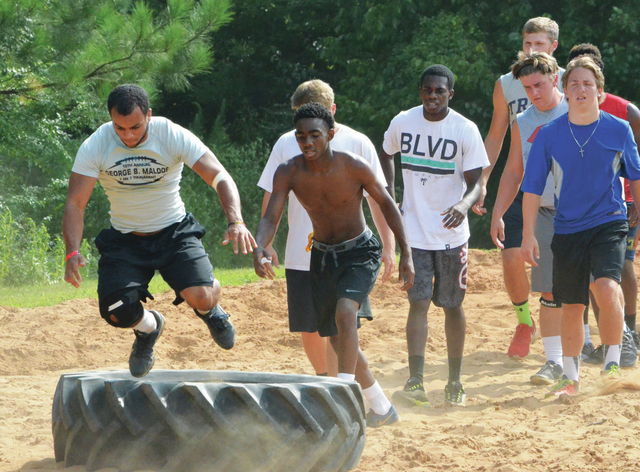 The Troup High Tigers get warmed up at the start of Tuesday’s practice session. The Tigers will officially open preseason practice on Monday, and they’ll open their season on Aug. 28 against LaGrange. Kevin Eckleberry | Daily News

http://lagrangenews.com/wp-content/uploads/sites/37/2015/07/web1_7-22-troup7.jpgThe Troup High Tigers get warmed up at the start of Tuesday’s practice session. The Tigers will officially open preseason practice on Monday, and they’ll open their season on Aug. 28 against LaGrange. Kevin Eckleberry | Daily News The Troup Tigers work out during practice on Tuesday. The Tigers will wrap up their summer schedule this week. Kevin Eckleberry | Daily News

http://lagrangenews.com/wp-content/uploads/sites/37/2015/07/web1_7-22-troup5.jpgThe Troup Tigers work out during practice on Tuesday. The Tigers will wrap up their summer schedule this week. Kevin Eckleberry | Daily News

LAGRANGE – It was a scorcher.

As the Troup Tigers made their way onto the practice field on Tuesday, it felt about like you’d expect it to on a July afternoon in Georgia.

Despite the opressive heat, though, the enthusiasm level was high as the Tigers took the field under the direction of first-year head coach Tanner Glisson.

The afternoon practice session was the continuation of the summer schedule for the Tigers, who are a little more than a month away from their season opener.

Glisson said the summer has been a critical time for the team since he didn’t take over as the head coach until May, so he’s still getting to know the players, and vice versa.

“Right now, we’re trying to teach our kids how we want to practice, how you transition, how you move around, what to expect,” Glisson said. “That’s kind of what we’re doing.”

Glisson, who came to Troup after spending the past two seasons as the Manchester head coach, added that “it’s about establishing norms, and expectations, and how we’re going to work, what the rules are.”

Glisson also said the summer has been all about getting the coaches on the same page.

“It’s coaching the coaches, too,” Glisson said. “That’s our number one thing, is having to make sure all the coaches understand exactly what I’m talking about. It’s one thing to be in house and say let’s go over it and this is how I want it done, but the coaches have to go out and teach it. It’s a trial run for them, too. But they’re doing good.”

Glisson is taking over as head coach after Lynn Kendall filled that role for the past three seasons.

Shawn Sutton was Kendall’s original replacement, but he resigned as head coach less than two months after taking the job.

The job search then began anew, and by the time Glisson arrived, the school year was at an end and the time for spring practice had already passed.

Kendall has remained at Troup and is a valuable assistant on Glisson’s staff.

Glisson said around 120 players came out to participate when the summer workouts got under way, and he said nearly every player has hung in there throughout.

While the players have been working hard, Glisson said he has strived to make things enjoyable for them during the summer months.

Glisson is a high-energy coach with big expectations for the program, but he also knows that the success he envisions may not happen right away.

Troup will wrap up its summer schedule this week, and it will hold its first official practice session on Monday.

After a week of conditioning, the Georgia High School Association then allows teams to begin holding full-contact practices on Aug. 1.

Troup will play two preseason games before beginning the season on Aug. 28 against LaGrange.