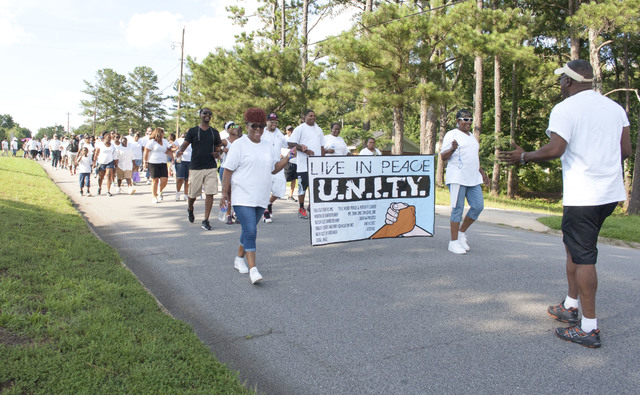 Area residents demonstrate for peace during a march June 28 in LaGrange.

http://lagrangenews.com/wp-content/uploads/sites/37/2015/07/web1_0629UnityMarch011.jpgArea residents demonstrate for peace during a march June 28 in LaGrange.

The Unity Group will hold its third and final march Sunday afternoon.

Organizers plan to begin the final march at Bridgewood Center on Mooty Bridge Road at North Greenwood Street at 5:30 p.m.

“This will be our last march,” said David Simpson, a member of the Unity Group and organizer of the marches. “We had two other marches recently to get people’s attention in the community. Now, we’re looking to do bigger and better things in LaGrange.”

Simpson partnered with fellow local barber Nate Newton and others to form the Unity Group. The organization formed as a means to respond to high-profile incidents of violence on LaGrange’s streets. The first two marches focused on two different areas of the city that have experienced criminal activity.

“We’re trying to show these young kids in LaGrange that there is a community out here that cares about them and that they can turn to if they need help,” said pastor Michael Jackson of Confidence Missionary Baptist Church on Colquitt Street. “We want to help steer our city’s kids in the right direction.”

The group is inviting everyone in the community to participate in the march. They encourage those who march with them to wear white as a symbol of solidarity against violence and crime within the city. The march will conclude with speeches from some of the Unity Group members, as well as prayers offered by ministers from local churches.