Summer soccer league was a hit 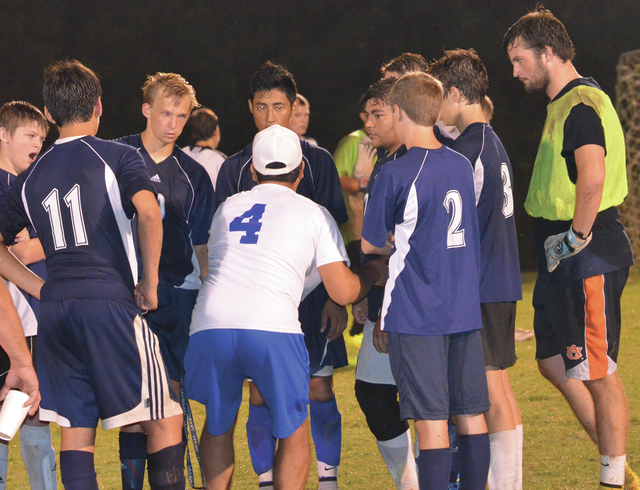 The Troup soccer team huddles during halftime of its loss to Lafayette Christian School in the championship game. Kevin Eckleberry | Daily News

HOGANSVILLE – They finished with a soccer marathon.

A summer soccer league that included teams from five local schools wrapped up on Thursday, and the final match finished a little before midnight.

The summer season concluded with a thrilling match, with Lafayette Christian edging Troup 5-4 in overtime to capture the championship.

Teams were on the field at Callaway High’s soccer complex for nearly seven hours on Thursday.

After completing some matches that were postponed on Tuesday because of rain, the teams then played a tournament to determine a league champion.

There were some exciting matches, including a 4-3 LaGrange win over Callaway that was decided when Reagan Peters, a standout for the Lady Grangers, scored the winning goal in overtime.

It eventually came down to two teams, and Lafayette Christian rallied from an early 3-0 deficit to beat Troup and secure the league title.

The league was the idea of LaGrange High coach Keita Placide.

“We had a great five weeks,” Placide said.

The league got under way on June 15, and the teams played every week after that, with the exception of the week of July 4th.

“It’s just all about the development of the kids,” Placide said. “Also, I felt really more linked to the community. Talking to the other coaches was really nice.”

Placide said it was a tremendous opportunity for his players to get a lot of time on the field together, and that’s especially important since the 2014 team was a senior-heavy one.

“They held their own,” Placide said.

“This has been a great opportunity,” Hembree added. “It’s fun to see this much soccer. Usually, it’s dead (in the summer).”

It was a productive summer for Troup, which finished second in the standings to Lafayette Christian before finishing second in the tournament.

It looked like the Tigers were possibly headed to the tournament championship after taking a 3-0 lead over Lafayette Christian, but they were unable to hang onto the lead.

That disappointment aside, Troup coach Jase Crenshaw said the league was a major benefit for his team.

“We graduated some guys last year, so we got an opportunity to put the younger students out there,” Crenshaw said. “They were able to make an impact. We came together in early June, and you could just see the impact. It’s just great. It’s incredible.”

The summer league was helpful for LaGrange Academy, which unlike the other county teams has its season in the fall.

LaGrange Academy, which finished second in the state tournament last season, opens its season in August.

“It’s perfect timing for us, because we’ll play all summer, and then that leads into our season,” LaGrange Academy coach Mike Petite said earlier this summer. “For these other guys, they’ve played their season and have already wrapped it up, and they have to wait a while.”

With all of the positive response he has received, Placide said he hopes the league returns next year.

“We’re going to try to make it an annual thing,” Placide said.