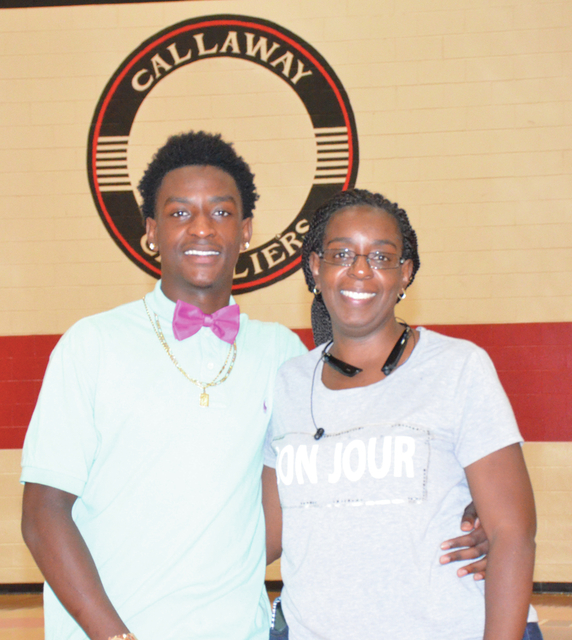 Quadarius Patillo with his mother, Cynthia Strozier. Patillo is getting a chance to play college basketball at Johnson and Wales University. Kevin Eckleberry | Daily News

http://lagrangenews.com/wp-content/uploads/sites/37/2015/07/web1_7-26-patillo.jpgQuadarius Patillo with his mother, Cynthia Strozier. Patillo is getting a chance to play college basketball at Johnson and Wales University. Kevin Eckleberry | Daily News

HOGANSVILLE – When the Callaway Cavaliers won a region championship and reached the quarterfinals of the state tournament in 2013, Quadarius Patillo was a role player who got about five minutes on the floor each game.

The following season, Patillo was oftentimes the first player off the bench, and he was a key member of a team that won another region title and reached the final four of the state tournament.

As a senior, Patillo made the most of his final go-around as a high-school basketball player.

Patillo was not only a starter, but he was one of the Cavaliers’ best players, and he ended up making the all-Region 5-AAA team while helping Callaway win a third consecutive region championship and make it to the elite eight.

Now, Patillo will look to keep progressing as a player as he heads to North Carolina to join the Johnson and Wales University basketball team.

“At first I was looking at other schools, but when they contacted me about basketball, that’s when I decided,” Patillo said.

Patillo said he along with about 20 other recruits worked out for the coaches, and after the scrimmage was done, he was offered a scholarship.

“He came from a five, six-minute person when he was a sophomore, to being a sixth man as a junior,” Hayes said. “He came back his senior year and he was starting. He improved his shooting, he improved his dribbling, he had great court awareness, and he was a great teammate. He kept the team up. I’m proud of everything he did.”

Like any competitive athlete, Patillo wanted to play, and he would rather have been on the court than sitting on the bench early in his playing career, but he always remained positive.

“I just worked hard in practice, didn’t mope around, didn’t show any attitude or anything,” Patillo said. “I knew my time was coming.”

When his time did come, he was ready for it, and his best season came when he was a senior.

“He averaged about 12 points per game, about eight rebounds a game, and four or five assists,” Hayes said. “And he led us in steals some times. He did a good job for us.”

Patillo’s biggest fan is his mother Cynthia Strozier, who’ll be making the trip up I-85 as often as she can to watch her son play.

As proud as she is of what her son accomplished on the court, she is even more pleased with what he has done in the class room.

Had Patillo not gone to college on a basketball scholarship, he could have attended school on an academic scholarship.

“I’m very excited,” she said. “Like I told him, at first you were going on an academic scholarship, and I’m as proud of that as the basketball scholarship.”

Patillo knew that basketball was important, but he was also aware that if he wanted to succeed beyond the high-school level, he had to focus on academics as well.

“I didn’t want to have the skills to play basketball, and not be able to play because of grades or something like that,” he said.

Patillo has been able to play with his brother Ernest Patillo the past two seasons, and they were both all-region players a year ago.

While eager to begin his college journey, Quadarius Patillo said he’ll “miss playing with my brother.”

“When we’re on the court together, we know each other, we know where each other will be,” Patillo said. “It’s not always like that. It’s always better with your brother.”