Full-speed ahead for Cavaliers 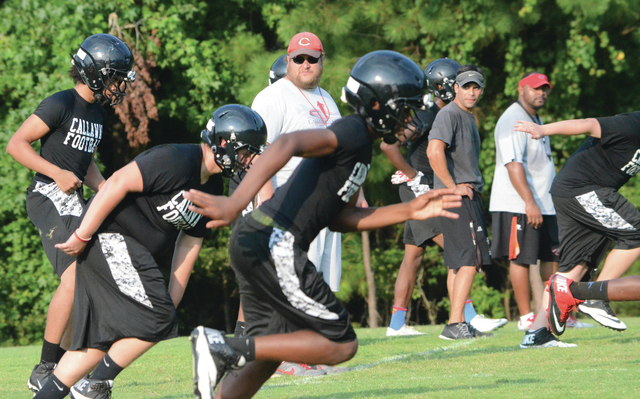 Callaway head coach Pete Wiggins keeps an eye on things as the team runs a play during the first day of preseason practice on Monday. Kevin Eckleberry | Daily News

http://lagrangenews.com/wp-content/uploads/sites/37/2015/07/web1_7-28-CHS3.jpgCallaway head coach Pete Wiggins keeps an eye on things as the team runs a play during the first day of preseason practice on Monday. Kevin Eckleberry | Daily News HOGANSVILLE – As the Callaway Cavaliers gathered for their first preseason practice in 2005, they had a new head coach.

Pete Wiggins, who had taken over the job after Claude Giddens left the school following the 2004 season, was looking to build a program that would win consistently.

The Cavaliers had losing records their first two seasons under Wiggins, although they did make the state playoffs in 2006.

Once the winning seasons started to come, though, they didn’t stop.

The Cavaliers went 8-4 in 2007 and reached the second round of the state playoffs, and the program has enjoyed nothing but success since then.

The Cavaliers have won at least seven games for the past eight seasons, they’ve qualified for the state playoffs nine consecutive years, and they’ve won a total of nine playoff games over that stretch.

On Monday, for the 11th time, Wiggins led a team onto the field for the start of preseason practice as the program looks to keep the good times rolling.

As always, there were some familiar faces right there with him.

Matt Napier, Dusty Hubbard, Kareem Douhne, Terry Hayes and Tray Tucker were members of Wiggins’ first coaching staff, and they have remained by his side for the past 11 years.

“It’s a great group. They’ve been around a long time,” Wiggins said. “It’s a big family. They’re great role models for the kids. They’re not only great ball coaches, but they’re special for the kids.”

All of Callaway’s coaches, veterans and newcomers alike, directed practice on Monday afternoon as the Cavaliers continued to prepare for a new season.

Callaway wrapped up his summer program last week with its annual Ironman competition.

Callaway will play a preseason game against Greenville on Aug. 14 in Hogansville, and it will open the season on Aug. 21 against LaGrange.

“The first day of practice, the kids were excited,” Wiggins said. “There was a lot of enthusiasm, and we just have to keep working to get better.”

Wiggins said it was an especially meaningful day for the seniors, who are getting set for their final season.

“A lot of seniors are excited about their last year,” Wiggins said. “They’ve been around a long time, and here it is. It’s a reality.”

The Cavaliers won’t put the full pads on and begin hitting until next week.

According to the Georgia High School Association, teams must have five days of conditioning practice before holding the first full-contact practice.

Wiggins said there will be a lot of teaching going on this week.

“We’re trying to install our offense and defense and special teams, and just work on fundamental football,” Wiggins said. “You can’t ever do enough of that. That’s what we’re going to try to do.”

Wiggins said this week is really valuable for some of the players getting their first taste of high-school football.

“There are some younger guys that still need to learn how to practice, learn the tempo of practice,” Wiggins said. “So, it’s a lot of little things, a lot of stuff we’ll be doing all week.”