USA South football coaches getting together 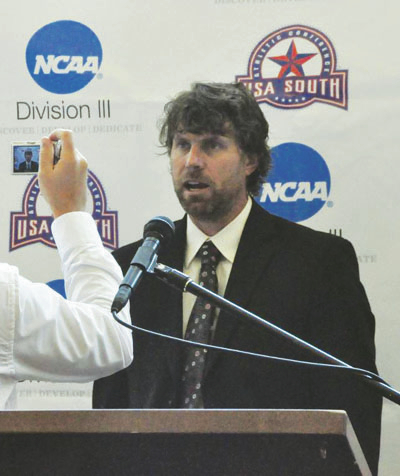 LAGRANGE – The head coaches for all of the USA South’s football teams, including LaGrange College’s Matt Mumme, will be in Fayetteville, N.C. on Thursday for the conference’s media day.

The event will take place at 1 p.m., and all eight of the conference’s coaches will get their turn at the podium to talk about their respective teams, and answer questions.

Also, the preseason football poll which is voted upon by the league’s coaches will be revealed.

The Panthers are heading into their second full season with Mumme as the head coach.

Mumme came to LaGrange College before the 2013 season to be the offensive coordinator, and he ended up taking over as head coach for the final three games of the season.

A year ago, in Mumme’s first full season as head coach, the Panthers posted a second consecutive 5-5 record, and they were 3-5 against USA South foes.

The Panthers will begin their preseason camp on Aug. 13, and they’ll open their season on Sept. 5 with a home game against Birmingham Southern.

After games against Berry College and Ave Maria, LaGrange College will kick off its USA South schedule with a game at Averett on Oct. 3.

A year ago, Christopher Newport won the USA South title with a record of 7-1, and Huntingdon and Maryville tied for second at 6-2.

The conference champion earns an automatic invitation to the NCAA Division III playoffs.

Access to the web site where Thursday’s event will be streamed live can be found at www.usasouth.net