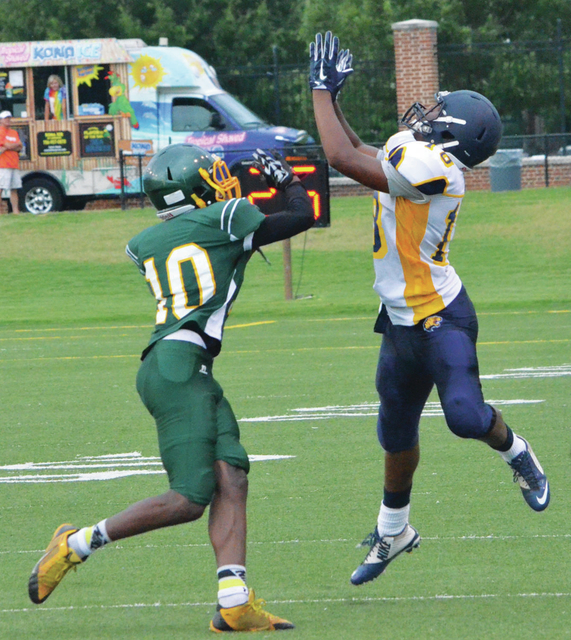 Troup’s Ethan Short tries to make a tackle during the first half. Kevin Eckleberry | Daily News

http://lagrangenews.com/wp-content/uploads/sites/37/2015/08/web1_8-14-troup1.jpgTroup’s Ethan Short tries to make a tackle during the first half. Kevin Eckleberry | Daily News LAGRANGE – The Troup Tigers hit their share of rough patches in Thursday’s preseason game against Spencer.

Troup struggled on both sides of the ball in a 33-15 loss, but the good news was that it was just a preseason game, and the start of the regular season is still two weeks away.

Troup will play another preseason game next week against Upson-Lee.

“The good thing about it is there’s nowhere to go but up,” said Tanner Glisson, Troup’s first-year head coach. “It was about as bad as we could have asked for, and that’s OK. We saw a lot of weaknesses.”

The starters for both teams played the entire first half and part of the third quarter, and the backups played for a good portion of the second half.

For Troup, everyone who was eligible to play got a chance to get on the field, and that was more than 100 players.

Troup was missing some key players who were serving a suspension.

“We’ve got to get a lot better or we’re going to have a long year,” Glisson said. “There’s nothing you can do but get better right now. You can’t cry about it. We’ve just got to go back and look at the film and coach harder.”

Glisson said a key moving forward will be to “identify who our key guys are and get them more reps. We’re trying to play way too many people. We’ve got to get where we’re only playing 30 people.”

Troup’s first possession was a three-and-out, and it didn’t take Spencer long to put points on the scoreboard, with Jeremy Burgess taking off on a 45-yard touchdown run.

Spencer scored again on its second possession, with Tyrell Smith muscling in for a 1-yard touchdown run, and the extra point made it 13-0.

With 1:17 left in the opening quarter, Spencer struck again, with quarterback Khalil Thomas hooking up with Ervin Davis for a 50-yard touchdown pass, and Troup trailed 20-0.

“We got out of position and didn’t tackle very well tonight,” Glisson said. “I thought we’d tackle better than we did.”

In the second quarter, Troup showed off its big-play ability.

On a third-down play, Troup quarterback Ken Truitt dropped back and heaved the ball toward the right sideline.

Tremayne Tolbert, Troup’s big-play senior wide receiver, snatched the ball away from a Spencer receiver and ended up scoring in a 72-yard touchdown.

Troup took a 26-6 deficit into the half-time break.

Troup moved the ball well the first two times it had the ball in the second half, but both of those possessions ended with turnovers.

On Spencer’s second possession of the second half, Troup’s defense delivered a big play.

After a Spencer fumble, Dexter Baker landed on the ball in the end zone, giving Troup its second touchdown of the game.

On Spencer’s next possession, a bad snap over the quarterback’s head resulted in a safety, and Troup was within 11 with 2:08 remaining in the quarter.

After the free kick, Troup got to the Spencer 39-yard line before the drive stalled.

After a punt, Burgess took off for a 75-yard touchdown run as time expired in the third quarter, and Spencer took a 33-15 lead.

Troup had a nice 40-yard drive in the fourth quarter, with Kaleb Jennings doing some solid work at quarterback.

Jennings completed four passes on the drive, including a 5-yard pass to Short for a fourth-down conversion.

That drive ended with a missed field goal.