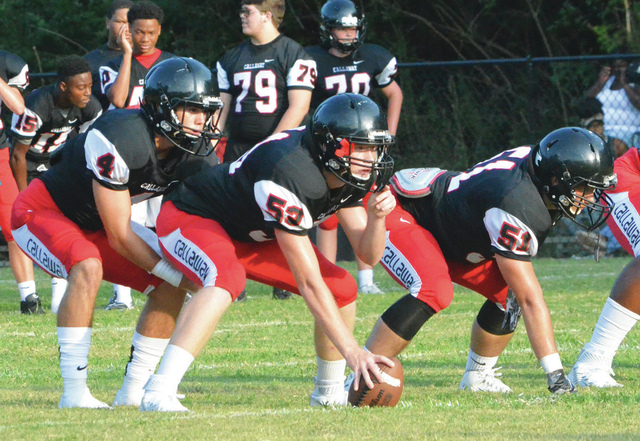 HOGANSVILLE – The Callaway Cavaliers scored on the first play of Friday’s preseason game against Greenville, and that’s pretty much how the rest of the night went.

Even without quarterback Braylon Sanders, who was unable to go because of an injury, the Cavaliers scored nearly every time they touched the ball on the way to a 57-21 victory.

It was a tune-up for next week’s regular season opener against the LaGrange Grangers.

Sanders, who was a standout wide receiver a year ago, has been moved to quarterback this season, but he didn’t play on Friday after hurting himself in practice last week.

Dylan Johnson, who was Callaway’s quarterback in the two playoff games a year ago, did a terrific job running the offense, and he threw a pair of first-half touchdown passes.

Callaway had the game’s opening possession, and on the first play, senior running back Cedric Maynard took the handoff from Johnson and showed off his speed and explosiveness on a 70-yard touchdown run.

On Callaway’s next possession, Johnson connected with tight end Mike Freeman for a nice completion to set up another Maynard touchdown run.

Callaway’s next touchdown came through the air, with Johnson finding Dre Martin for a touchdown.

Tyrek Frazier got into the act later in the half with a touchdown run, and Callaway had a 38-13 lead at the half.

Dominic Copeland got the second-half scoring started with a touchdown run, and Callaway ended up scoring two more touchdowns with the reserves in the game.

Callaway will be the visiting team for Friday’s game against LaGrange at Callaway Stadium, with kickoff set for 7:30 p.m.

OF NOTE: For a more complete breakdown of Friday’s win over Greenville, see Monday’s sports section.