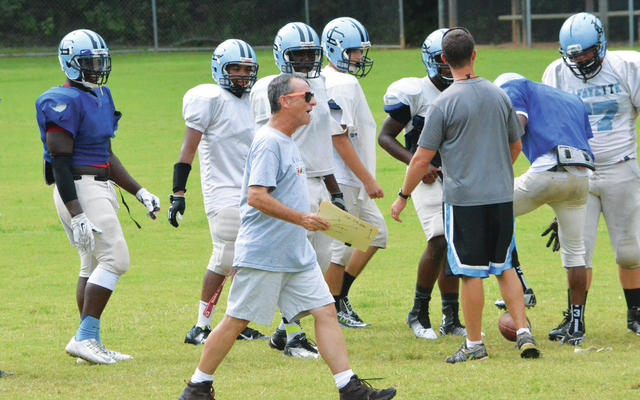 The Lafayette Christian School Cougars run a play during practice this week. The Cougars will begin their season on Friday with a home game against Appling Christian. Kevin Eckleberry | Daily News

http://lagrangenews.com/wp-content/uploads/sites/37/2015/08/web1_8-20-cougars1.jpgThe Lafayette Christian School Cougars run a play during practice this week. The Cougars will begin their season on Friday with a home game against Appling Christian. Kevin Eckleberry | Daily News Glenn Quiggle, who is heading into his eighth season as Lafayette Christian’s offensive coordinator, keeps an eye on things during practice. Kevin Eckleberry | Daily News

http://lagrangenews.com/wp-content/uploads/sites/37/2015/08/web1_8-20-cougars2.jpgGlenn Quiggle, who is heading into his eighth season as Lafayette Christian’s offensive coordinator, keeps an eye on things during practice. Kevin Eckleberry | Daily News

LAGRANGE – The Lafayette Christian School Cougars have been riding high the past few seasons, and they’ll look to keep the good times rolling when they kick off a new season Friday night.

The Cougars will get things started with a home game against Appling Christian, with kickoff set for 7:30 p.m.

The Cougars are coming off the best season in school history that ended with a loss in the semifinals of the Georgia Independent Christian Athletic Association state tournament.

In 2013, the Cougars also reached the final four after winning their first playoff game ever.

“We’re looking forward to the season,” said Nate Shaw, who is taking over as head coach after spending the past few seasons as an assistant coach. “We want to start off well with Appling Christian. We think we can win, but we think it’s a good challenge for us as well. We’re not going to take them lightly.”

This will be Lafayette Christian’s eighth season as a football program.

For the first seven years, Nick Nehring was the head coach, but following the successful 2014 season he decided it was time to take a step back, so he turned the keys to the program over to Shaw.

Also joining the staff this year is Kevin Payne.

The Cougars have some major holes to fill.

Six of the players who helped the Cougars make back-to-back trips to the final four graduated.

The Cougars appear to be in good shape to keep things moving in the right direction this year, though.

With the returning players and some newcomers, Lafayette Christian has a big 10-person senior class.

Among those seniors is Eli Shepherd, who plays linebacker and fullback and is a dominant player on both sides of the ball.

Shepherd, whose highlight video on www.hudl.com has received a lot of views, is getting some looks from different colleges.

“I’m proud of him,” said Nehring, who has gotten to know Shepherd well over the years. “I know he’s been a real pleasure to have, and I appreciate his parents, and him just sticking with us. I just hope he stays healthy, because he can have a really good year.”

Another one of the seniors is Sam Marshall, who will be the Cougars’ quarterback this season.

Senior Jemi Reed should be one of the team’s top play-makers, and Shaw said he will be all over the field this fall.

Defensively, senior Lane Brooks is coming off a phenomenal junior season where he set a school record with 10 interceptions.

Another senior is Levy McCurry, who’ll be an anchor on the offensive and defensive lines.

Nehring said McCurry, like Shepherd, will have a chance to play college football.

“We’ve got a school that emailed us a few weeks ago and said mentioned him specifically by name wanting to find out more about him,” Nehring said.

Senior Morgan Channell had a terrific junior season as a place kicker making nearly every one of his extra-point and field-goal attempts, and senior lineman Turner Hill is another returning starter.

There will be plenty of underclassmen who’ll contribute heavily this year as well, including junior linebacker and running back Jess Hill, who was the team’s second-leading tackler a year ago.

“He had some forced turnovers, a bunch of fumble recoveries, he picked off several passes last year,” Shaw said. “He likes defense, and he gets the scheme. He’s a quite presence out on the field, but he’ll rack up the stats.”

Jacob Lueken made some nice contributions as a freshman running back last season, and his role will expand this year, and junior Josh Shepherd will be a key player on the line of scrimmage.

As for the future of the program, Shaw said “we’ve got some really good looking freshmen,” and the middle-school program is thriving as well.