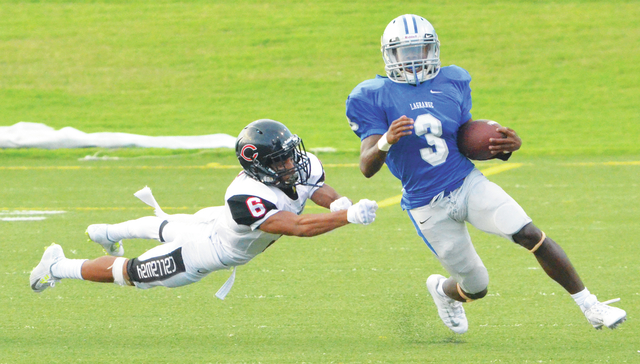 Callaway’s Dre Martin attempts to break a tackle during the second half of Friday’s game after making a catch. Kevin Eckleberry | Daily News

http://lagrangenews.com/wp-content/uploads/sites/37/2015/08/web1_8-23-LHS11.jpgCallaway’s Dre Martin attempts to break a tackle during the second half of Friday’s game after making a catch. Kevin Eckleberry | Daily News LAGRANGE – Well that was a heck of an opening statement.

The LaGrange Grangers kicked off a new season in emphatic fashion with a dominant 45-20 victory over the Callaway Cavaliers at a jam-packed Callaway Stadium on Friday night.

It was a tight game at the half, with the Grangers holding a 15-6 lead, but they scored a touchdown less than two minutes into the third quarter, and they were off and rolling.

It was a big win for a LaGrange program in its second season under the direction of head coach Dialleo Burks.

“They played with focus. That’s all it was, focus,” Burks said. “That’s how we practice every day from the time we hit the field. We demand focus. And it’s tough, because a lot of them think we don’t love them, but we just have to get them to Friday, get them to game day. Once we get them to game day, everything else is good. Now, they can reap the benefits of all that hard work.”

Callaway beat LaGrange 20-14 in overtime a year ago, and it was hoping to make it two in a row, but it didn’t happen.

“I said earlier in the week, the team that makes the most mistakes will come up short, and we sure made a lot of them tonight,” Callaway head coach Pete Wiggins said. “So we have a lot of things we can get better at, and that’s what we’ll do when we get back on Sunday.”

LaGrange took momentum into the halftime break after getting a 12-yard touchdown run from Kimani Barnes with 30 seconds left in the second quarter to claim a 15-6 lead.

On the first play from scrimmage in the third quarter, Callaway fumbled, and the Grangers recovered at the 5-yard line.

Some penalties knocked the Grangers back to the 16-yard line, but after a 13-yard keeper from quarterback LaPerion Perry, Amad Ogletree scored on a 3-yard run.

Callaway’s next possession ended with a safety, and after the free kick, LaGrange marched 70 yards for a touchdown.

On the fourth play of the drive, Andrew Askew caught a short pass, and he turned that into a 49-yard touchdown, and LaGrange led 31-6.

The Grangers kept pouring it on when Jeremiah Wright picked off a pass and raced 30 yards for the touchdown, and LaGrange led 37-6 with 4:48 left in the third quarter.

Callaway tried to get some momentum back when Cedric Maynard raced 56 yards for a touchdown, and Noah Stephens made the extra point to trim LaGrange’s lead to 37-13 with 3:57 to play in the quarter.

The Grangers drove right back down the field and scored again, though, with senior wide receiver Mike Hardy making a remarkable 13-yard touchdown catch after he took the ball away from two Callaway defenders.

“I was cramping all night, and I didn’t get too many balls thrown my way,” Hardy said. “But when I had a chance to make a play, I made it.”

That was the first play of the fourth quarter, and LaGrange led 44-13.

Callaway capped the scoring when quarterback Braylon Sanders scored on a 1-yard run with 4:36 to play.

In the first half, LaGrange took a 2-0 lead when Sanders was tackled in the end zone for a safety on Callaway’s first possession.

That’s the way it remained until Perry capped an 83-yard drive with a 10-yard touchdown run with 8:43 left in the first half.

Perry had a 30-yard run right before the touchdown.

Callaway came right back with an 80-yard scoring drive, with fullback Brandon Boddie bulling his way into the end zone from two yards out.

The extra-point attempt was unsuccessful, and LaGrange led 8-6 with 3:12 to play in the half.

Back came the Grangers, who went 75 yards on a six-play drive capped by Barnes’ 12-yard touchdown run.

LaGrange then came back out in the second half and put the accelerator down and won going away.

“My hats off to (the players), and to the coaching staff, for putting together a good game plan, and sticking with it,” Burks said. “We had some rough patches, but they just stayed with what they believed in, and it was a great night.”