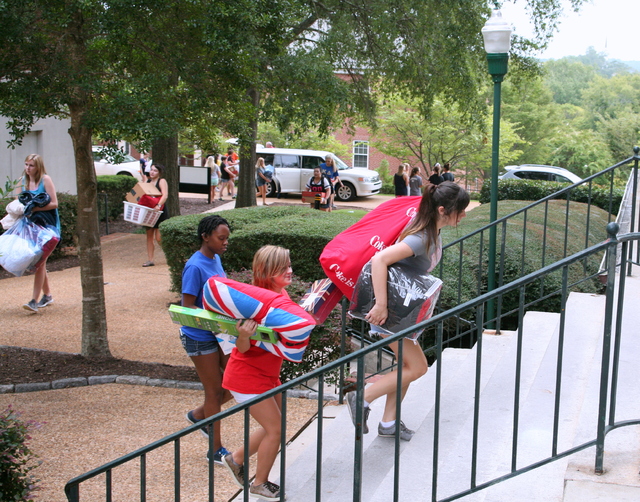 Students move into Hawkes Hall at LaGrange College. The incoming class of undergraduates is the largest in the college’s history, according to officials.

http://lagrangenews.com/wp-content/uploads/sites/37/2015/08/web1_WEB0827LCenrollment.jpgStudents move into Hawkes Hall at LaGrange College. The incoming class of undergraduates is the largest in the college’s history, according to officials.

According to preliminary registration numbers, this year’s group of 364 new students is the largest in the college’s history, the college announced Wednesday. Freshmen and transfer student enrollment, when counted separately, also set records.

It is an exciting time at the college, said President Dan McAlexander.

“Recent enrollment numbers show a steady trajectory of growth for us,” he said. “We are attracting more and more top students.”

The number of high school students participating in the college’s selective Presidential Scholarship program continues to surge, he said, reaching a record 152 in 2015. Of those, 75 students decided to enroll at LaGrange.

“Only the most academically prepared high school students are invited to be considered for our highest scholarships,” McAlexander said. “These are the most sought-after students, and their enrollment here has more than tripled over the last four years.”

Another area of growth is in the expansion of academic offerings.

This year, the college added a graduate degree in clinical mental health counseling, as well as five new minors and concentrations. The music department has expanded with an instrumental program, and a new marching band will debut this fall.

“Some of our newer programs such as philanthropy and development and exercise science are gaining attention from around the country,” said Dr. David Garrison, provost. “The faculty continue to explore other new and inventive areas of study.”

The college’s growing academic reputation is evidenced by the success of its students, said Will Jones, vice president for external relations.

“We have recent graduates who have gone on to prestigious medical, law, pharmacy and veterinary schools and into respected jobs such as critical care nurses at Shepherd Center,” he said. “Over and over, they tell us how well LaGrange College prepared them for graduate school and their careers.”

Joseph Miller, dean of enrollment management, said the word is spreading about the transforming experiences offered at LaGrange.

“This year’s record class indicates that we are becoming a first-choice school for a growing number of students,” he said. “When you factor in the financial aid we offer, LaGrange becomes an affordable investment for families and students.”

Freshman Danielle Suggs from Pensacola, Florida, said she knew LaGrange was where she needed to be after her first visit.

“Everyone I met was so kind and helpful,” she said. “The professors, who are known for their expertise, also were very caring. I felt that every person was welcoming me and wanting me to succeed.”