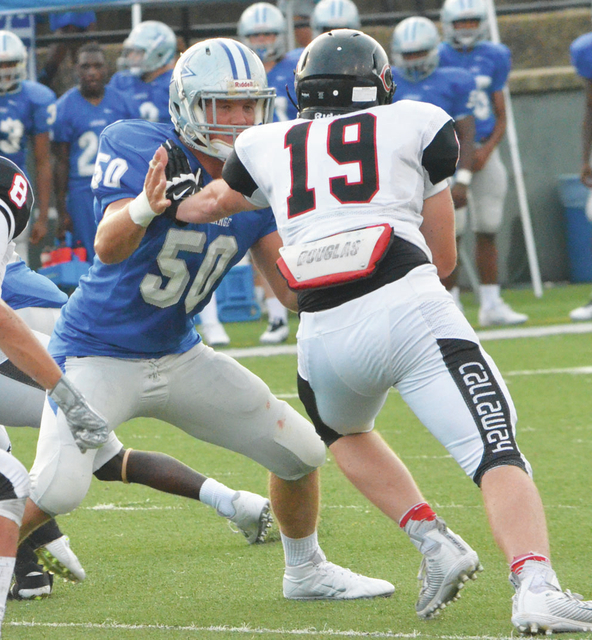 LaGrange quarterback LaPerion Perry waits on the snap while offensive linemen Alexander Clark and Jordan Ragan provide protection during a preseason game against Newnan. LaGrange will look to move to 2-0 with a win over Troup on Friday. Kevin Eckleberry | Daily News

http://lagrangenews.com/wp-content/uploads/sites/37/2015/08/web1_8-27-LHS3.jpgLaGrange quarterback LaPerion Perry waits on the snap while offensive linemen Alexander Clark and Jordan Ragan provide protection during a preseason game against Newnan. LaGrange will look to move to 2-0 with a win over Troup on Friday. Kevin Eckleberry | Daily News LAGRANGE – They enjoyed the moment, but it didn’t take long for the LaGrange Grangers to begin focusing on their next assignment.

Considering that assignment is a showdown with the rival Troup Tigers, moving past last week’s big 45-20 win over the Callaway Cavaliers wasn’t too difficult.

After losing to Callaway and Troup a year ago, LaGrange will have a chance to sweep its county rivals this season.

LaGrange will try to make that happen when it faces Troup on Friday at 7:30 p.m. at Callaway Stadium.

“We have to come out and make sure we set the bar high every day,” said Dialleo Burks, LaGrange’s second-year head coach. “We can’t afford to sit back and think that they’ve got it. We’re still a young team. We’re not just going to take that one win, and now that’s the end. We’re not going to do that. We’ll continue to come out with the same focus each and every day.”

The Grangers showed plenty of focus in last week’s impressive win over the Cavaliers.

After the Cavaliers scored a touchdown to get within two in the second quarter, the Grangers proceeded to rip off 30 consecutive points to build a 38-6 lead in the second half.

There were some shaky moments in the first half.

The Grangers’ first three possessions ended with a punt and two interceptions, and they were called for a bunch of penalties in the first half.

The Grangers drove 75 yards for a touchdown late in the first half, though, and from that point on, they were unstoppable.

Quarterback LaPerion Perry was terrific, running for more than 150 yards, and he had a 10-yard scoring run in the first half.

Perry also had touchdown passes of 13 yards to Mike Hardy, and 49 yards to Andrew Askew.

Kimani Barnes and Amad Ogletree, who were part of a balanced rushing attack, both had scoring runs.

The offensive line suffered a major blow in spring practice when senior Luke Elder, who has verbally committed to the University of North Carolina, injured his knee.

Elder later had surgery, and while it’s possible he may return this season, he’s not able to play right now.

“With the blow to Luke, it was important that those guys gel together, and get their identity,” Burks said. “And that’s what they did. I was head over heels with their play up front. That’s where it starts. It doesn’t matter who you have at quarterback, or in the backfield, or at receiver. If those guys up front don’t do their job, nothing else matters.”

While Elder is unable to play, Burks said he continues to be a big part of the team.

“It’s big for him to be around,” Burks said. “He could sit at home, but he wants to be out here with his guys, and look in their eyes. That goes a long way. I tell the guys, that’s motivation right there. He’s there every single day. He’s not making excuses.”

LaGrange’s defense also got the job done against a Callaway offense with a lot of playmakers.

Bobby Willoughby led the way with nine tackles, and defensive linemen Emmanuel Mann and Johnathan Olajubutu each had five tackles.

Jeremiah Wright returned an interception 30 yards for a touchdown, and LaGrange had two safeties.

Defensive coordinator Marvin Kendricks said after looking at the game film, there is still plenty of work to do, though.

“We watched film, and we realize we have more kinks to work out if we want to be a good defense,” Kendricks said. “We made a lot of mistakes. You think you play well, until you pop the film in and you realize how many (mistakes) you made. You can’t get content.”

While LaGrange already has a game under its belt, this will be Troup’s season opener, although the Tigers have played two preseason games.

In its final preseason game last week, Troup fought a strong Upson-Lee team to a 14-14 tie.

Burks is expecting a stellar effort from Troup on Friday.

“Because of who you’re playing, the level of play automically elevates,” Burks said. “It’s just who can hold on the longest. That’s all it is. They will come out jacked up. I don’t care if they’ve got 13 players, it’s still going to be a talented team. They’re not going to give it to us. We’ve got to go out and win. That’s the mindset of our guys, and everyone associated with the program. We’ve got to go out and take it.”

LaGrange started a bit slowly last week against Callaway, and Burks hopes that changes on Friday.

“We want to come out fast,” he said. “We want to set the tempo. We don’t want to wait for anyone else to set it.”

SERIES HISTORY: LaGrange leds all-time series 19-8, although Troup has won four of the past five games