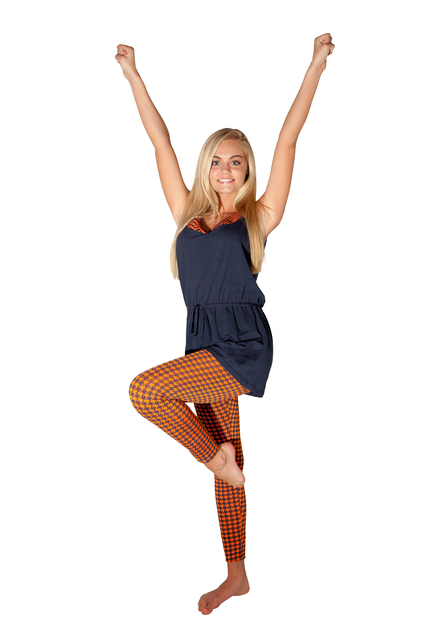 Sheree Harper, right, and Tricia Dimon dress in their Gameday Leggings apparel. Dimon, owner of Design Group Exhibits in LaGrange, created Gameday Leggings with help from Harper after Dimon was unable to find Auburn-themed leggings. Now the leggings come in 16 varieties for different teams and are sold in more than 200 retailers nationwide.

http://lagrangenews.com/wp-content/uploads/sites/37/2015/09/web1_WEB0910Leggings1.jpgSheree Harper, right, and Tricia Dimon dress in their Gameday Leggings apparel. Dimon, owner of Design Group Exhibits in LaGrange, created Gameday Leggings with help from Harper after Dimon was unable to find Auburn-themed leggings. Now the leggings come in 16 varieties for different teams and are sold in more than 200 retailers nationwide. A model shows off the Jukin’ Legs print by Gameday Leggings. A model shows off the Orange and Blue Houndstooth print by Gameday Leggings.

http://lagrangenews.com/wp-content/uploads/sites/37/2015/09/web1_WEB0910Leggings4.jpgA model shows off the Orange and Blue Houndstooth print by Gameday Leggings.

LaGRANGE — As football season is upon us, one local businesswoman is hoping her creation will become a new gameday fashion staple.

Gameday Leggings were created by local designer Tricia Dimon. They give sports fans a new way to don their favorite team colors on game day.

The idea came to Dimon in 2013 when she, a diehard Aurburn fan, wanted tiger legs and couldn’t find any. Dimon said she spent a night searching online when the idea came to her to make them herself.

Not a stranger to design, Dimon owns Design Group Exhibits in LaGrange, a company that makes trade show exhibits. With that and her experience as a fashion merchandise graduate of Auburn, Dimon went to work to create her tiger legs. She gave her designer Jim Hines a picture and he created the leggings.

On impulse she ordered a large amount of the printed leggings, which sat in her warehouse at Design Group Exhibits.

“What made me order a mass quantity, I don’t know,” Dimon said. “Every time I would go into the warehouse I would think ‘what was I thinking?’”

She and her team then had the idea to display the leggings at a trade show in Atlanta in July 2014. Dimon said retailers at the show came up to her asking if they could sell them in their store. The leggings are now sold in close to 200 retailers nationwide, including local shops Plum Southern and Expressions of the Heart, the gift shop at West Georgia Health.

Gameday Leggings offers 16 color patterns including orange and blue, blue and white, and black and white. Dimon said she is careful not to limit the leggings to any particular team or school to provide a variety for customers.

“I don’t try to define who the fans are or what they use them for,” she said.

In addition to the 16 patters, Dimon also created BFF leggings to support a cause close to her heart — breast cancer awareness.

BFF Leggings come in two different patterns, each one named after her sister-in-law and friend who both were diagnosed with breast cancer.

After Jan Tucker, Dimon’s sister-in-law, was diagnosed, Dimon said she felt she needed to do something to raise money and created the BFF Leggings. Four dollars from each pair sold goes towards breast cancer research, Dimon said.

With the BFF Leggings, Dimon said she hopes to raise at least $30,000 for breast cancer research.

When Dimon told Tucker about her idea to create leggings in support of breast cancer, Tucker said she thought it was a great idea.

“They’re a great way to show support, and it’s a fun way bring awareness to the disease,” she said.

Kay McCall, after whom one of the BFF leggings are named, said they are about creating a support system among family and friends.

“All of my friends have a pair and we all get together and wear them at the same time,” McCall said. “It just makes a difference when you have a big support system.”

Added Tucker: “She’s got a really big heart and she wants to make a difference in the world and this is one of the ways she is trying to do that.”

Dimon said what makes Gameday Leggings unique is their versatility. The leggings can be worn several ways, including as a shirt or shrug. A video tutorial shows the different methods at www.gamedayleggings.com.

Dimon said the leggings are also made for comfort as the material keeps wearers cool in the summer and warm in the winter.

Other than versatility and comfort, Dimon said the leggings are meant to add fun to the sports season.

“I’m a big energy person,” she said. “I believe what you put out there expands, and so these are done with the intent of providing winning energy and fun to whoever wears them.”

Sheree Harper, who Dimon teased is the vice president of fanatics, has also worked alongside Dimon to create the Gameday Leggings brand. Harper said Gameday Leggings are created to be a unique and fashionable way for women to show their team spirit.

“It’s fun, it’s different, it’s something everybody would have fun wearing,” Harper said.

With retailers mostly being in the Southeast, Dimon said they are working to expand the brand to the Midwest and West Coast in the coming months with shows in Las Vegas and Houston.

The spirit doesn’t stop at leggings. Dimon and her team have also created Gameday Jewelry that includes earrings, necklaces and bracelets with a stylized football on them.

Future Gameday products like scarves, dresses, skirts and headbands are in the works, Dimon said.

“There are all kinds of possibilities when you think outside the box,” Harper said.

Dimon said leggings and jewelry can be bought online at its website or at one of the retailers, which can be located on the website.