He’s comfortable on an island 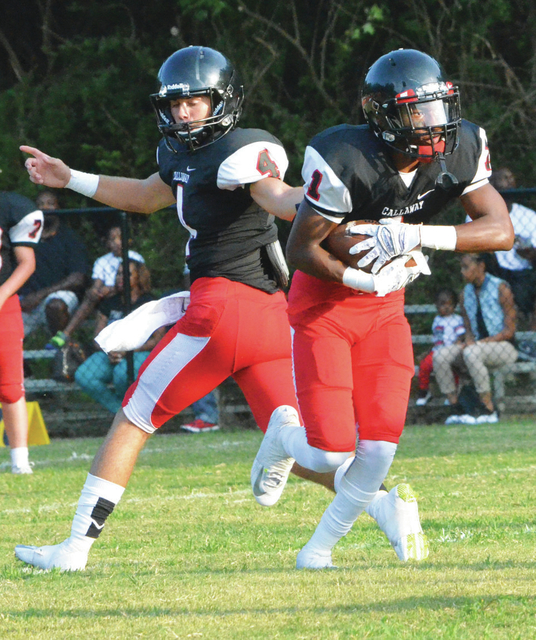 Callaway’s Tyrek Frazier gets in position to make an interception during a game against LaGrange. Frazier, a senior, is one of the leaders for the Cavaliers, who will host Harris County on Thursday. Kevin Eckleberry | Daily News

http://lagrangenews.com/wp-content/uploads/sites/37/2015/09/web1_9-15-frazier1.jpgCallaway’s Tyrek Frazier gets in position to make an interception during a game against LaGrange. Frazier, a senior, is one of the leaders for the Cavaliers, who will host Harris County on Thursday. Kevin Eckleberry | Daily News Callaway’s Tyrek Frazier takes a handoff from Dylan Johnson during a preseason game against Greenville. Frazier is a backup running back to Cedric Maynard. Kevin Eckleberry | Daily News

http://lagrangenews.com/wp-content/uploads/sites/37/2015/09/web1_9-15-frazier3.jpgCallaway’s Tyrek Frazier takes a handoff from Dylan Johnson during a preseason game against Greenville. Frazier is a backup running back to Cedric Maynard. Kevin Eckleberry | Daily News

HOGANSVILLE – It can be a lonely spot.

On the defensive side of the football, no player is more exposed than the cornerback, especially when he’s locked up man-on-man with a wide receiver.

To play the position well obviously requires physical skill, but it also helps to have more than a small helping of self confidence.

To be a successful defensive back a player has to believe, he has to know, that he’s better than the man he’s lined up across.

Callaway’s Tyrek Frazier feels he has what it to takes to cover anyone, and for the most part this season, he’s been proven right.

Frazier has been performing at a high level for three seasons at Callaway, and he has been a part of plenty of success.

He began receiving significant playing time, both as a running back and a defensive back, during the 2013 season when Callaway won 12 games and made it to the state semifinals.

A year ago, Frazier helped the Cavaliers reach the second round of the state playoffs, and he’s a key component of this year’s team that is hoping to keep the good times rolling.

Callaway head coach Pete Wiggins said Frazier is a leader “not by being vocal, but by his actions.”

“He practices hard, he works hard in the weight room,” Wiggins said. “Over his high-school career, he’s always been willing to be a scout-team player, and I feel that’s made him a better varsity player. I’m just really proud of how he developed. It’s been a very good four years.”

While Frazier is a gifted corner back, he has also proven to be a big-play weapon on offense.

Callaway has had some exceptional running backs in recent years, including Eddie Culpepper and current senior Cedric Maynard, and Frazier has provided a nice change of pace as a backup to those players.

Maynard has been the featured back this year, and he has been phenomenal.

When Maynard takes the occasional break, defenses don’t get a whole lot of relief when Frazier comes into the game, though.

“Cedric’s a good runner. You’ve got to watch out for him,” Frazier said. “But I’m going to run hard. Everything I do, I go hard.”

Wiggins said when Frazier comes into the game on offense, he “runs hard, and he’s physical, and he’s fast. He does a good job following the blockers, and hitting alleys. He’s just a great kid, and has a great attitude.”

Whenever his number is called, Frazier is ready.

“I love playing both sides of the ball,” he said. “That’s why you condition yourself every day. You work hard every day.”

As important as Frazier is on offense, he brings the most value to the defense.

Callaway has had some injuries to the secondary this season, making Frazier’s presence even more valuable.

Frazier knows he’s the top guy in the secondary, and he’s fine with that.

“I take it as a challenge,” he said. “Everything’s a challenge. You have to be ready to take on everything that comes your way.”

As a team, Callaway faced the challenge of having to bounce back from a disappointing season-opening 45-20 loss to LaGrange.

At the halftime break, the Cavaliers were behind by 10 points, and Frazier said defensive coordinator Dusty Hubbard let the players know he wasn’t pleased with their effort.

“He came in the locker room and was like we’re taking a beating. We can’t take it like that,” Frazier said. “He pointed everyone out individually and we took it as men, and we went out there and fought hard. We showed out in the second half. I was proud.”

Callaway will try to make it three wins in a row when it hosts Harris County on Thursday, and Frazier said everyone is ready, especially after taking last week off.

“We’re ready,” Frazier said. “The bye week was boring, and we’re ready to get back out there.”