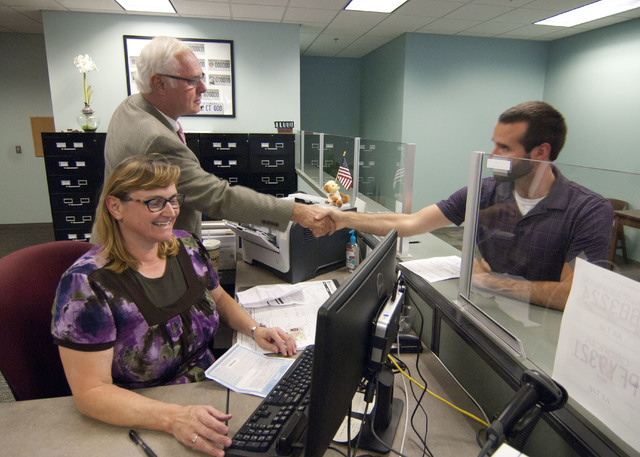 Gary S. Wood, left, Troup County Tax Commission, shakes hands with Matthew Portwood of LaGrange as Elaine Barintine works to help Portwood on Friday at the tax office in the government center on Ridley Avenue. Wood announced Friday he will not seek a fifth term as tax commissioner.

http://lagrangenews.com/wp-content/uploads/sites/37/2015/09/web1_0928Woods01.jpgGary S. Wood, left, Troup County Tax Commission, shakes hands with Matthew Portwood of LaGrange as Elaine Barintine works to help Portwood on Friday at the tax office in the government center on Ridley Avenue. Wood announced Friday he will not seek a fifth term as tax commissioner.

LaGRANGE — The Troup County Tax Commissioner on Friday announced he will not seek a fifth term in office during the 2016 election cycle.

Gary S. Wood, who was first elected tax commissioner in 2000 and took office in January of 2001, said it has been a privilege to serve the people of Troup County, but in the next few years, he plans to turn 70 — just not as tax commissioner.

Looking back at his four terms as commissioner, Wood said he’s most proud of collecting back taxes when he first came to office. Wood, upon taking office, collected $4.5 million worth of multiple years of backed taxes — some of which was owed by elected officials, he said.

“We cleaned that up on the first term, and it has remained clean since,” he said.

He admits, it ruffled some feathers, but he has no regrets about aggressively pursuing the money owned by delinquent tax payers.

“Ninety percent of people pay their taxes on time,” he said. “If that 10 percent doesn’t pay theirs, then the school, the state, the county — they still need that $4.5 million, and if they don’t get it, they’re going to go up (raise taxes) on the 90 percent that do pay, so I’ve been very aggressive. When we have elected officials trying to go out and raise taxes, and they’re not paying their own, I have a real problem with that.”

Under Wood’s leadership, the office has one of the highest collection rates in the state. So far this year, with the November 15 tax deadline looming, 99.91 percent of Troup County residents have paid their taxes, he touted.

Wood said he’s also proud of accomplishing his goal of improving customer service, and removing the glass partition that separated tax payers from the tax office employees. It creates a more welcoming and friendly atmosphere, he said. During his tenure, he’s added credit card capability and computerized the tax system, allowing for a more efficient operation.

“Collections and customer service was my objective when I came he in here,” he said. “It used to be like going to the dentist to go to the tax office, its not that way anymore. Nobody likes paying taxes, but they’re at least treated with courtesy and respect. It’s a much more pleasant place to come, now.”

“When I saw that half of my staff couldn’t do motor vehicle (taxes), and the other half couldn’t do property taxes, and that people were waiting in line, I put an end to that real quick,” he said. “I thought, ‘that dog ain’t gonna’ hunt,’ and I cross trained my staff and now we run three for four less people than other counties, and we do our own collecting.”

Elaine Barintine, an employee at the tax office, has worked for the county for more than 30 years and has seen Wood’s entire administration.

She said Friday she’s enjoyed working under him and has appreciated the changes he’s made as tax commissioner.

“He’s made a lot of good changes, he’s been good,” she said. “He’s been very customer-oriented and that’s been his main concern, to make sure that customers are taken care of.”

Barintine has even gone out into the county with Wood and knocked on doors to collected unpaid taxes.

“We’ve had some pretty interesting experience going out and collecting taxes,” she said. “We’ve had to go out to businesses and actually knock on the door and and talk to business owners. But Mr. Wood is very good with people, and I think when they actually see him, they realize he’s serious.”

As for the next tax commissioner, Wood said he hopes his replacement will take his job as seriously as he has, and will continue to doggedly seek out people who are behind on their tax bill.

“The best dollar you ever spend is your tax dollar,” Wood said. “You probably get more out of it than any other purchase you make. I hope whoever comes in here after me will continue to hold folks accountable and keep doing what we’re doing here.”

He knows being a tax collector doesn’t make him the most popular man in Troup County at times, but he keeps a smile on his face.

“I love my job, I love collections. What did Jesus Christ say? He said give God what is his and give Caesar what it his,” he said laughing. “Nobody likes taxes, but I’ve learned to appreciate them a little.”