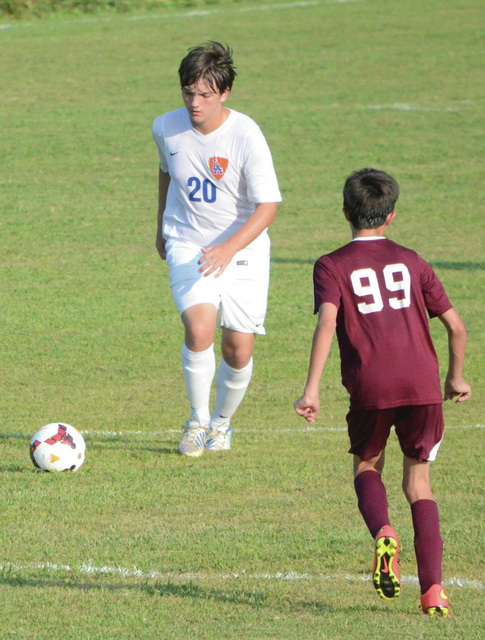 LAGRANGE – If the plan falls into place, the LaGrange Academy Warriors will be celebrating a state championship around 9:30 p.m. on Friday.

LaGrange Academy’s boys’ soccer team, after dispatching Academe of the Oaks 5-2 in the first round of the Georgia Independent Christian Athletic Association state tournament on Tuesday, will be at Clayton State University today for a final-four showdown with Oak Mountain.

If LaGrange Academy wins that game, it will advance to Friday’s state-championship game at 7:30 p.m., and that game will also be at Clayton State.

This is the third consecutive season LaGrange Academy has reached the final four.

In 2013 and 2014, LaGrange Academy went on to make it to the state-championship game before falling to Trinity Christian.

Will the story have a happier ending this year?

The players and coaches will have an answer to that question soon enough.

“We absolutely have an opportunity to go get it done,” LaGrange Academy coach Mike Petite said.

In the most recent game, Zach Callaghan had three goals and Mason Brown had one in a 4-0 win over Oak Mountain.

In a 5-4 win over Oak Mountain, Will Trotter had the game-winning goal late in the match, and that was one of his two goals.

Jake Keeble, Callaghan, Will Trotter and Colby Heath also had goals in the 5-4 victory.

In today’s other final-four matchup, it’ll be Furtah Prep against Brandon Hall, and those are teams LaGrange Academy has played as well.

Furtah Prep beat LaGrange Academy 6-3 last week to win the region championship, and in the previous meeting those teams tied.

LaGrange Academy lost a handful of key seniors from the 2014 team that finished second in the state, but the team has kept winning at a prolific pace this fall.

Callaghan, who has scored 26 goals this season, said the team’s “chemistry” has been a key factor.

“It’s been a great year,” Callaghan said. “We have so much team chemistry this year. I played on a lot of teams with a lot of talented players, but I think this has been the closest group we’ve had. We really distribute the ball well. It’s been great.”

Troup heads to state with momentum