Grangers come through when it matters 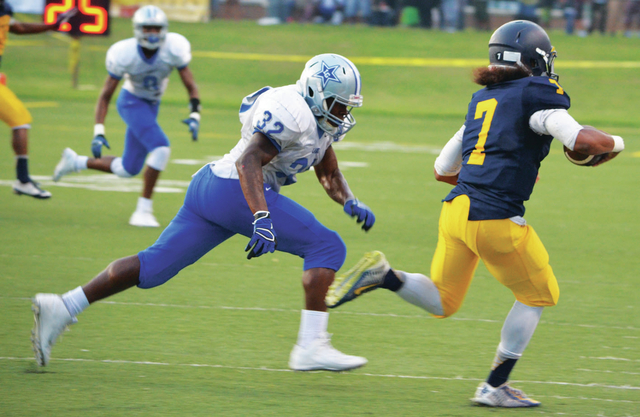 LaGrange defensive linemen Johnathan Olajubutu, Emmanuel Mann and DeAndre Pollard get ready for a play during a game this season. Olajubutu made the game-ending tackle in last week’s 35-28 win over Shaw. Kevin Eckleberry | Daily News

http://lagrangenews.com/wp-content/uploads/sites/37/2015/10/web1_10-26-LHS3.jpgLaGrange defensive linemen Johnathan Olajubutu, Emmanuel Mann and DeAndre Pollard get ready for a play during a game this season. Olajubutu made the game-ending tackle in last week’s 35-28 win over Shaw. Kevin Eckleberry | Daily News LAGRANGE – It’s not a stretch to say the season was on the line.

Had the LaGrange Grangers lost to the Shaw Raiders last week, they could have still made it to the state playoffs, but they would have needed some help.

If LaGrange had lost that game, there was a very real possibility it would have been on the outside looking in when the playoffs began.

That’s what made the two defensive plays the Grangers made at the end of the 35-28 victory so huge.

With less than 10 seconds left, Shaw had the ball on the 2-yard line trailing by seven points, needing a touchdown and an extra point to tie it.

In less than a minute, the Raiders had moved the ball 78 yards from their own 20-yard line, and it looked like they were moments away from possibly tying the game, or maybe even going ahead with a touchdown and a two-point conversion.

On the first play from the 2-yard-line, LaGrange defensive back Mike Hardy, who is also one of the team’s top offensive play-makers as a wide receiver, broke up a pass in the end zone.

That meant it was down to one play.

Shaw’s talented quarterback B.J. Knight dropped back, but before he could get rid of the ball, Jonathan Olajubutu was on him.

Olajubutu brought Knight down to end the scoring threat and the game while making sure LaGrange’s playoff hopes were alive and well.

LaGrange (4-4 overall) improved to 2-2 in Region 1-AAAAA, and it will sew up a playoff spot with wins over Harris County and Northside to finish the regular season.

“Jonathan Olajubutu, our junior defensive tackle, he came through for us,” LaGrange High defensive coordinator Marvin Kendricks said. “And Mike Hardy made the pass breakup before Butu’s play on third down. That was huge.”

Shaw had plenty of offensive success in the game.

Knight threw for 287 yards, and Nick Beason had six catches for 175 yards while also running for 104 yards.

LaGrange’s defense stood tall when it had to, though.

“I’m very excited for our boys,” Kendricks said. “They fought the whole game. They didn’t let up.”

The Grangers were a long way from being at full strength against the Raiders.

One of LaGrange’s top defensive players, linebacker Bobby Willoughby, injured his knee in the Carver game on Oct. 10, and he won’t return this season.

Willoughby was not only LaGrange’s leading tackler, but Kendricks said he was “the quarterback of the defense.”

“Not only was he going to go out there and get you anywhere from eight to 12 tackles, but he was going to get everybody lined up,” Kendricks said.

LaGrange was also playing without one of its top defensive linemen, James Clark, who is out with a shoulder injury.

“James could have been very helpful against Shaw,” Kendrick said. “James can run. He would have had some big plays for us.”

Injuries are an unfortunate part of the game, though, and Kendricks always lets his defensive players know they could be called upon at any time.

“That’s why everybody practices,” Kendricks said. “That’s why I tell you you’re a chin strap away from being on the field. Don’t think like a backup, because you never know when it’s your turn.”

One of those players who got his chance to perform was freshman defensive lineman Myles Johnson, who the coaches figured was going to be a big part of the team’s future.

Last week against Shaw, he was a key part of the team’s present with six tackles.

“He’s going to be a big-time player,” Kendricks said.

Kendricks said senior Keaote Davis also “stepped up” and had a big game on the defensive line.

In LaGrange’s previous game, it lost to Carver despite finding the end zone seven times and scoring 50 points.

The Grangers followed that up by scoring five touchdowns against the Raiders last week.

Perry, who had a monster game against Carver, delivered again in the Shaw game with four touchdown passes.

Andrew Askew is piling up the stats as well.

Against Carver, Askew not only caught two touchdown passes, but threw a pair of them as well.

In the Shaw game, he had scoring catches of 16 and 81 yards in the first half as LaGrange built a 14-0 lead.

Hardy had a 52-yard touchdown catch against Shaw, and with less than a minute remaining, Kimani Barnes caught a short pass from Perry and turned it into a 57-yard touchdown.

Matthew Thomas was perfect on all five of his extra-point attempts.

It was a hard-fought game.

Twice in the game the Grangers had a 14-point lead, but both times the Raiders rallied to pull even.

Unlike their previous tight games this season, though, the Grangers found a way to close things out.

There’s plenty of work still to do.

First up, LaGrange will host Harris County on Friday.

Harris County (2-6 overall), which won the region championship a year ago, has struggled this season and is 1-3 in the region.

Harris County still has plenty to play for, though, and it will be a desperate team Friday night.

LaGrange then closes the regular season against Northside on Nov. 7 in Columbus, and that promises to be a challenging game.

Northside (5-2 overall) is 4-0 in the region, and it will have a first-place showdown with Carver this week.

“We’re in the driver’s seat, but it’s going to be tough from here on out,” Kendricks said. “It’ll be tough this week, and next week. If we make it to the playoffs that’ll be tough. It doesn’t get any easier.”