It’s time for the rematch 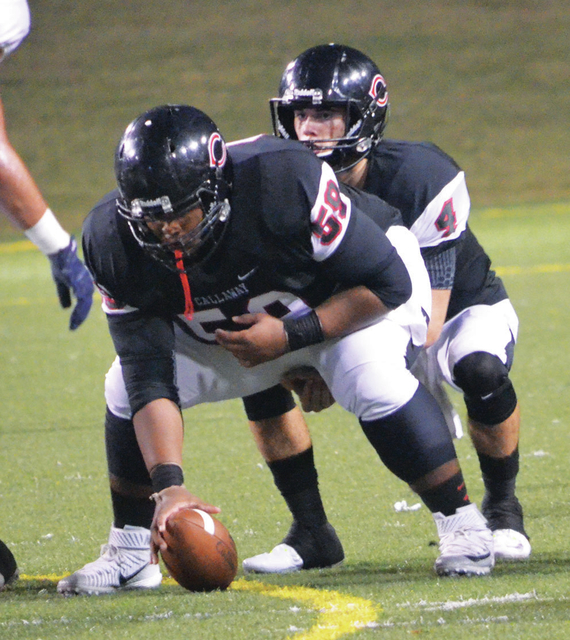 A year ago this time, the Callaway Cavaliers and Central-Carroll Lions were gearing up for their region-championship showdown.

It was a classic.

In a game that had a little bit of everything, it was Central-Carroll blocking a field-goal attempt and returning it for a touchdown as time expired to claim a 40-34 victory.

This week, those two teams are preparing to face off again, and once again a region title is on the line.

Central-Carroll will host Callaway at 7:30 p.m. on Friday, and the winner will be the Region 5-AAA champion, and the loser will be the number two seed.

Central-Carroll (9-0) is one victory away from a second consecutive perfect regular season, while Callaway (8-1) hasn’t lost since a season-opening setback to LaGrange.

Central and Callaway are both 4-0 in Region 5-AAA.

“It’ll be a great atmosphere up in Carrollton,” Callaway head coach Pete Wiggins said. “They’ve got a great football team. Coach (Rico) Zackery does a great job with his kids. They play physical, and it should be a big-time matchup.”

Many of the players who were on the field for last year’s game are back again this season, including senior fullback Brandon Boddie, who had a touchdown run in last week’s win over Haralson County.

“ We’ll have to practice hard, get after it, and do what we’ve been doing for the last eight games,” Boddie said. “We’ve been playing as a team.”

In the game’s final three minutes, there were a total of four touchdowns scored, including three by Central.

After Central scored the tying touchdown with one minute remaining, Callaway marched down the field with then quarterback Terry Godwin leading the way.

Godwin, now a freshman wide receiver for the Georgia Bulldogs, completed a 24-yard pass to Braylon Sanders, setting up a 32-yard field-goal attempt.

Central’s Khalell Abdusalam blocked the kick, and Dajour Riddle picked up the ball and went nearly 90 yards for the touchdown.

Now, a year later, Callaway will get another chance to beat Central and win a region title.

“We’re ready for that game,” Callaway defensive lineman JT Wortham said. “We’ve been waiting on that one all season. We’ve just got to take it one step at a time, and that’s the next step.”

The Cavaliers are rolling right now.

They’ve not only won eight in a row, but their past six victories have come in blowout fashion.

The Cavaliers have outscored their four region opponents 155-38, and most of the points they’ve allowed have come late in those games when the starters were on the sideline.

In last week’s 40-7 win over Haralson County, senior running back Cedric Maynard moved a step closer to 2,000 yards with 178 yards on nine carries with three touchdowns.

For the season, Maynard has 1,928 yards with 21 touchdowns, and he’s averaging 12 yards every time he touches the ball.

Also in the Haralson game, Boddie and Frazier had scoring runs, and Dylan Johnson threw a touchdown pass to Joe Brown.

Callaway’s defense also delivered another dominant performance, with Haralson’s lone touchdown coming long after the starters had left the game.

It was another complete performance by the Cavaliers, who are one victory away from tying a school record for wins in the regular season.

“We’ve gotten better each week,” Wiggins said. “They come to work every day. They’ve got a good attitude. We’ve just to keep it going.”

Central-Carroll, meanwhile, has struggled a bit the past few weeks against a pair of teams with three wins between them.

After holding on to beat Cedartown 27-22, Central-Carroll outlasted Rockmart 14-6 last week in a defensive struggle.

Central’s defense is its calling card.

The Lions have given up less than 10 points per game, and five of their nine games they’ve surrendered seven or fewer points.

The Cavaliers won’t be lacking for confidence heading into the game, though.

They’re playing well in all facets of the game, and the players on the team have been through plenty of big games over the years.

“I’m just ready to play,” Callaway linebacker Jibrell Jackson said. “That’s going to be a big game, a good atmosphere, and I know we can do it.”

It’s a winning night for Grangers