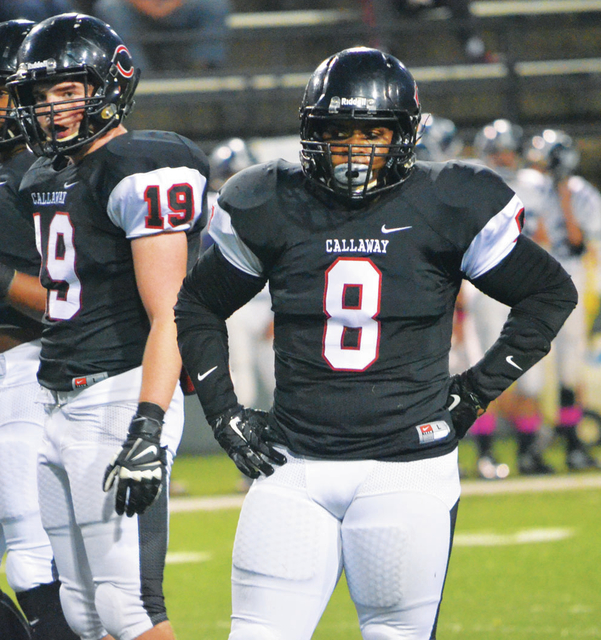 After missing the 2013 season with a knee injury, Callaway’s Rashawn Lovelace has been a fixture on the defensive line the past two seasons. Kevin Eckleberry | Daily News

http://lagrangenews.com/wp-content/uploads/sites/37/2015/11/web1_11-5-callaway4.jpgAfter missing the 2013 season with a knee injury, Callaway’s Rashawn Lovelace has been a fixture on the defensive line the past two seasons. Kevin Eckleberry | Daily News

HOGANSVILLE – There has been one constant on the Callaway football team this season.

There have been a flurry of injuries, and players changing positions, but the one area of the team that has remained unchanged since Day 1 is the defensive line.

When the Cavaliers played their first game of the season against the LaGrange Grangers, JT Wortham, Keegan Ramsey, Rashawn Lovelace and Keegan Woods were the starters.

When Callaway closes the regular season with Friday’s huge showdown against Central-Carroll for the Region 5-AAA championship, those same four players will be manning the defensive front line.

Callaway head coach Pete Wiggins, who has overseen a lot of shuffling when it comes to the lineup this season, is glad to have the continuity at that defensive-line position.

Wortham and Lovelace were both starters a year ago, while Ramsey and Woods got a lot playing time as reserves.

Wortham, who has had a sensational senior campaign, set the tone before the season even began when he won the team’s Ironman competition, an indication of how much work he’d put in during the offseason.

Wortham has been one of the Cavaliers’ leading tacklers each week, and he has made a bunch of plays behind the line of scrimmage.

After Wortham had a 12-tackle performance against Harris County, with four tackles for loss, defensive coordinator Dusty Hubbard said opposing offenses were very aware of where he was on the field.

“It’s just gotten more and more where teams run away from him,” Hubbard said. “He really made a jump in the offseason, especially as far as his strength. He did a lot of speed work and has gotten a lot faster.”

Wortham also showed what he can do when he gets the ball in his hands during a big win over Heard County early in the season.

Callaway was trailing by 10 points early in the fourth quarter when Wortham caught a 61-yard touchdown pass from Braylon Sanders.

That play helped spur Callaway to a 20-17 come-from-behind victory.

To add to what has been a special senior year for Wortham, he was named the school’s homecoming king during halftime of the Pepperell game a few weeks ago.

For his part, Wortham said individual numbers don’t mean a thing to him.

The only stat he cares about is wins.

Lovelace has also been a force up front in his second season as a starter.

Back in the 2013 season, when the Cavaliers made it to the state semifinals, Lovelace was just a spectator.

He was going to be a contributor that season, but he tore his ACL and ended up not playing at all.

While his teammates were enjoying the best season in school history, Lovelace was working hard to make sure he’d be ready to go as a junior.

The hard work paid off, and Lovelace was a key piece of the defensive puzzle on the 2014 team that reached the second round of the state playoffs.

“My sophomore year, I did mostly physical therapy,” Lovelace said. “I tried to come to some of the games. Mostly I just tried to get back right with my knee and everything.”

Lovelace said his job isn’t necessarily to make tackles, although he has plenty of them, but to tie up the offensive linemen so the linebackers can swoop in and make the plays.

“I make sure to watch the ball, and win the line of scrimmage,” Lovelace said.

Woods saw significant playing time as a sophomore, and when his opportunity came to a be starter this season, he was ready to go.

Woods said for the defensive linemen, it’s all about being disruptive on the line of scrimmage, and oftentimes the linebackers are the beneficaries as far as tackle numbers go.

“We really just set up the tackles for them, by occupying blockers,” Woods said. “They go in and make most of the tackles.”

Woods was one of a handful of new starters on defense when the season began, and he said everyone has grown more comfortable as the season has gone along.

“We have (improved),” Woods said. “We’ve come together as a unit. At the beginning of the year, we were a little confused. We’ve gotten a lot better.”

Ramsey, who like Woods got a lot of playing time a year ago as a sophomore, said he and the other defensive linemen’s job is to “occupy the guards and the tackles, and we let the linebackers can come unblocked and make the tackles.”

A handful of other players have rotated in on the defensive line this season, including sophomores Lichon Terrell and Jamie Sellers.

Stephen Curtis and John Curtis, who both start on the offensive line, have also played on the defensive line this season.

“I’ve got them rolling in some, but they’re starting offensive linemen though, so I use them if I need them, and don’t if I don’t,” said Jason Sherrer, who coaches the defensive linemen.

The players over the years have responded to Sherrer’s tough coaching, and this group of linemen is no exception.

“Those guys are very tight,” Wiggins said. “Those guys have great relationships. They’re very close. They’re hard on one another, yet they give everything they’ve got. Coach Sherrer’s got a great relationship with those guys, and he demands the most out of them. I feel like after each game, those four guys have left it on the field. As a coach, that’s all you can ask for.”