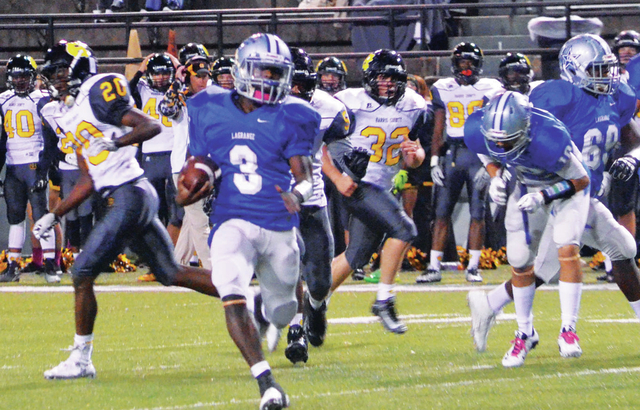 LaGrange High’s Matthew Thomas makes a field goal in the third quarter of last week’s game against Harris County. That kick gave the Grangers a lead they wouldn’t relinquish on the way to a 30-20 victory. LaGrange will visit Northside on Saturday in the final game of the regular season. Kevin Eckleberry | Daily News

http://lagrangenews.com/wp-content/uploads/sites/37/2015/11/web1_11-2-LHS38.jpgLaGrange High’s Matthew Thomas makes a field goal in the third quarter of last week’s game against Harris County. That kick gave the Grangers a lead they wouldn’t relinquish on the way to a 30-20 victory. LaGrange will visit Northside on Saturday in the final game of the regular season. Kevin Eckleberry | Daily News LaGrange’s defense will have its hands full trying to slow down a dangerous Northside offense. Kevin Eckleberry | Daily News

http://lagrangenews.com/wp-content/uploads/sites/37/2015/11/web1_11-2-LHS35.jpgLaGrange’s defense will have its hands full trying to slow down a dangerous Northside offense. Kevin Eckleberry | Daily News LaGrange senior running back Kimani Barnes fights for extra yards last week against Harris County. Barnes had to leave that game with an injury, and the team is hoping to have him back Saturday against Northside. Kevin Eckleberry | Daily News

http://lagrangenews.com/wp-content/uploads/sites/37/2015/11/web1_11-2-LHS14.jpgLaGrange senior running back Kimani Barnes fights for extra yards last week against Harris County. Barnes had to leave that game with an injury, and the team is hoping to have him back Saturday against Northside. Kevin Eckleberry | Daily News LAGRANGE – They’ve been in desperation mode for awhile.

When the LaGrange Grangers lost to the Carver Tigers 51-50 on Oct. 10 on their home field, it was a costly loss.

The Grangers found themselves sitting at 1-2 in Region 1-AAAAA, and not only were their region-championship hopes gone, but they were facing an uphill fight in their quest just to make it to the state playoffs.

While the Grangers were down, they were far from out.

Following the Carver game, the Grangers returned from an off week and got a huge 35-28 road win over the Shaw Raiders, and they followed that up with a 30-20 home victory over Harris County last week.

Now, with those two wins under their belt, the Grangers have put themselves in position to not only make the playoffs, but finish second in the region and earn a home game for the state playoffs.

There’s still work to do, though.

On Saturday at 4 p.m. at Kinnett Stadium in Columbus, LaGrange and Northside will face off, and the winner will finish second in the region.

If Northside loses, it will still be in the playoffs as the number three seed.

If LaGrange loses, it could end up in a three-way tie for third place, and there would be a mini-playoff on Monday to determine which two of those teams make the state playoffs.

LaGrange has in essence been in playoff mode the past two weeks, and that won’t change on Saturday.

“If we win this, we can host a home playoff game,” senior offensive lineman Guy Wegienka said. “This is a must-win game.”

The Grangers are in this position because they’ve found a way to close out close games the past two weeks.

After the Carver loss, the Grangers were 3-4, and they’d had chances to win each of those games they lost.

The most heart-breaking of those losses came against Carver.

After taking a 28-0 lead in the first half, LaGrange ended up losing by one point when a field-goal attempt in the closing moments just missed.

The week before the Carver game, LaGrange made a game of it after trailing 14-0 in the fourth quarter, but Columbus held on for a 21-13 victory.

In non-region play, Mary Persons kicked a field goal as time expired to claim a 16-13 victory.

LaGrange also fell to Spalding County 20-9 for their first loss of the season.

In each one of those losses, the Grangers were right there with a chance to win at the end, but they were unable to make it happen.

Leading 35-28, LaGrange made a goal-line stand at the end to preserve the win.

Last week against Harris County, it was another close one.

After Harris County scored a touchdown to get within three, LaGrange responded with a touchdown of its own to put it away.

If LaGrange does beat Northside, there will be a case of “what could have been” because of the Carver loss, but head coach Dialleo Burks is just glad his team has figured out how to close things out.

“They’ll be able to sit back and say we know we should have finished first by letting that game get away,” Burks said. “But things happen. They needed to learn, and hopefully we have learned. We’ve got two wins since then, and now we’re heading into the last game, and it’ll be a tough game.”

Northside, which is having a successful season, had some heart-break of its own against Carver.

Last week, Northside and Carver played for the region championship, and it was a tight one.

Northside led 16-0 in the first half, and it was still ahead 25-20 with five minutes remaining.

Carver, after convering a fourth-and-10 situation, scored the go-ahead touchdown with three minutes remaining, and Northside was unable to answer.

Carver had a 28-25 victory, and Northside’s title hopes were over.

This is, nonetheless, still an extremely capable Northside team that, like LaGrange, has plenty to play for.

The Patriots know they’re going to the playoffs regardless of the outcome of Saturday’s game, but with a win, they’ll get to host a state game.

Northside has been a terrific defensive team this season.

The Patriots have given up fewer points than any other team in the region, and they have three shutouts.

Northside’s offense hasn’t been too shabby, either, with running back Kalan Watts leading the way.

Watts ran for more than 200 yards in the season opener, and he has continued on to have a big season.

In a 24-17 victory over Columbus, Watts returned a kickoff 98 yards for a touchdown.

Northside also has a talented quarterback in Levi Dunn, who completed 6-of-10 passes for 121 yards with a touchdown against Columbus.

“Their quarterback, and their two running backs, those guys, they cause you to not get any sleep at night, with how hard they run the ball, and how consistent they are,” Burks said. “Defensively, they run around. They’re going to be disciplined.”

Burks said his team will have to be disciplined as well to have a chance.

That includes not giving the ball away with turnovers, or committing costly penalties.

“We just can’t have mental letdowns,” Burks said. “On third-and-short, or fourth-and-short and we jump offsides. We can’t do that. Make them earn everything they get.”

For LaGrange, a key to the recent success has been an offense that has been unstoppable.

Junior quarterback LaPerion Perry continues to overwhelm opposing defenses, whether he’s taking off on a long run, or finding one of the many talented receivers for a completion.

Last week against Harris County, Perry scored all four of his team’s touchdowns, all on the ground.

In the victory over Shaw, Perry got it done through the air with four touchdown pass, including two to Andrew Askew, one to Mike Hardy, as well as the game-winner to Kimani Barnes.

Barnes, a senior running back, also had a scoring run in the game.

In the wild 51-50 loss to Carver, Perry had two touchdown runs, and two scoring runs.

Askew had two touchdown catches against Carver, and he also threw a pair of scoring passes, both to Hardy, and Derieko Smith got into the act with a scoring catch.

In their past three games, the Grangers have scored 125 points, and they haven’t scored fewer than 30 points in any of those games.

LaGrange’s defense has surrendered its share of points in recent weeks, but that unit has made some big stops the previous two weeks.

In the Shaw game, it was junior defensive lineman Johnathan Olajubutu making a tackle on the final play to preserve the win.

In the special-teams department, LaGrange place kicker Matthew Thomas made three extra points against Harris County, and he also made a field goal late in the third quarter that gave his team a lead it wouldn’t relinquish.