More than just a name 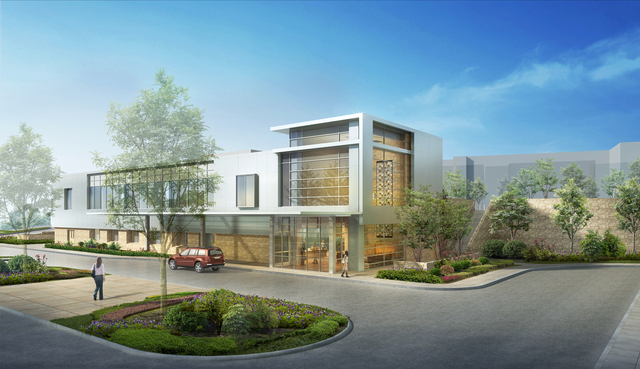 A physician scans a patient at the Enoch Callaway Cancer Clinic in an undated handout photo from West Georgia Health. The partnership agreement between WGH and WellStar Health System — which is pending regulatory approval — earmarks $30 million for spending on capital investments, such as the cancer clinic’s renovation, within the first two years.

http://lagrangenews.com/wp-content/uploads/sites/37/2015/11/web1_CancerClinic0031.jpgA physician scans a patient at the Enoch Callaway Cancer Clinic in an undated handout photo from West Georgia Health. The partnership agreement between WGH and WellStar Health System — which is pending regulatory approval — earmarks $30 million for spending on capital investments, such as the cancer clinic’s renovation, within the first two years. An employee of West Georgia Health interacts with a patient in an undated handout photo from WGH. A partnership between WGH and WellStar is pending regulatory approval.

http://lagrangenews.com/wp-content/uploads/sites/37/2015/11/web1_CancerClinic0021.jpgAn employee of West Georgia Health interacts with a patient in an undated handout photo from WGH. A partnership between WGH and WellStar is pending regulatory approval. The proposed renovation of the Enoch Cancer Clinic is shown in an artist’s rendering. The partnership agreement between West Georgia Health and WellStar Health System — which is pending regulatory approval — earmarks $30 million to be spent on capital investments, such as the cancer clinic’s renovation, within the first two years.

http://lagrangenews.com/wp-content/uploads/sites/37/2015/11/web1_CancerClinic0011.jpgThe proposed renovation of the Enoch Cancer Clinic is shown in an artist’s rendering. The partnership agreement between West Georgia Health and WellStar Health System — which is pending regulatory approval — earmarks $30 million to be spent on capital investments, such as the cancer clinic’s renovation, within the first two years.

LaGRANGE — Patient services and access to health care will remain unchanged as the partnership between West Georgia Health and the Marietta-based WellStar Health System progresses, according to WGH’s CEO.

The boards of WGH and WellStar on Thursday agreed to move forward with a partnership pending authorization by the state Attorney General’s office, which is expected in about three months. Following regulatory approval, WGH CEO Jerry Fulks said the local hospital would continue to provide existing services.

“Our board, in discussions and negotiations, wanted to make sure that (existing services) continued,” Fulks said in a conference call with the Daily News on Friday. “That is built into our relationship (with WellStar) — services will not be discontinued for any of the current services that we offer. “

Fulks said perhaps the most immediate change patients and area residents may notice will be a slight change in name.

“We do anticipate, proudly, that the WellStar name will become a prominent part of our identity,” he said. “It doesn’t mean that we’ll give up the West Georgia Health identification but that we will combine those names and further reflect our participation as a proud member of the WellStar family.”

Patients who are enrolled in Medicare, Medicaid or private insurance currently accepted by WGH will not have their coverage impacted by the partnership, Fulks added.

“The only change that might come about is if there’s a change or expansion in the Medicaid program, but certainly we will continue full participation in whatever government compensation programs that are out there,” he said.

Physicians will also retain all admitting privileges previously enjoyed before the partnership.

In the coming years, though, the changes will be more than just a name.

Over the course of seven years after the partnership is finalized, WellStar has pledged to invest $84 million toward capital projects at WGH, according to a copy of the agreement between the two health care systems that WGH provided the Daily News.

The investment “will enable us to accelerate capital expenditure projects that have been on our capital planning books for some time but have been unable to fund because of the requirements under our bond covenant,” Fulks said. The money will provide a “real boost” to the community, Fulks added, and said the accelerated growth would not have been possible without the partnership.

In the first two years after the agreement is finalized, $30 million are earmarked in the agreement for capital improvements, which Fulks said would likely be used for the renovation of the Enoch Callaway Cancer Clinic.

“The cancer clinic is the ideal example of what we’re talking about,” he said. “That will be the focus of our initial planning. (We plan to) accelerate and re-engage the construction and renovation in hopes that we’ll get that project up and running before the end of the first two years.”

The balance of the $84 million would likely be spent partially on renovating the hospital’s pharmacy and laboratory departments, which Fulks said are in need of expansion. The hospital is also eyeing the prospect of adding robotic surgery technology, although that concept is still in an early consideration phase, Fulks said.

Jobs are safe … for now

As the third largest employer in Troup County, about 1,400 people work for WGH, according to the Troup County government’s latest Comprehensive Annual Financial Report.

No changes in staffing levels or employment will be made for the first six months after the partnership begins, according to the WGH-WellStar agreement.

“Continued employment of the retained employees after this six-month period will depend on the needs of WellStar and the West Georgia parties,” the agreement states. It goes on to state that changes in work force, compensation and benefits may increase or decrease as WGH and WellStar “respond to market forces.”

WellStar’s CEO, Candace Saunders, told the Daily News by phone that her company will make every effort to avoid layoffs by advanced strategic planning. She also said WellStar would make every effort to retrain displaced employees and find them other positions within the health care system, should layoffs occur.

“That’s something that’s been a long-standing tenant of our health system,” Saunders said. “We really build our reputation on being an employer of choice and we have a very strong commitment to our people and our care givers.”

Fulks similarly said WellStar has what he called a “no layoff” policy and that if restructuring were to occur, reassignments would be possible to prevent layoffs.

Tax payers off the hook

In 2008, the Troup County Board of Commissioners agreed to back a series of bonds totalling about $46 million to help WGH finance the construction of the new south tower. For WGH to receive a better interest rate, commissioners pledged to raise taxes by as much as seven mills if WGH were to default on the bond. The bond agreement required WGH to keep at least 60 days’ cash on hand — a threshold that was never breached.

Now, under the agreement between WGH and WellStar, the bond’s burden will be off the backs of Troup County tax payers and entirely the responsibility of WellStar in the event the hospital ever went into default.

“In the unlikely event that Troup County would ever be called upon to make a payment for bonds … WellStar has agreed to pay the necessary funding to meet the county’s debt service payment obligation,” according to a statement from WGH and the agreement.

According to financial documents released by the WGH Board of Trustees last month, the hospital is up to date on its bond obligations and has more than double the amount of cash on hand to stay within the bond’s agreement.

There are administrative changes coming to WGH’s governance, but a significant amount of day-to-day control will remain with the existing WGH Board of Trustees.

“The local board will be responsible for very important functions they’ve had all along, such as the credentialing process and working with our local medical staff,” Fulks said. “Our local board administration will continue the responsibility we’ve had for overseeing quality, joint-commission accreditation and other reporting mechanisms such as the state and federal requirements.”

Some facets of WGH’s operation will be shifted to the WellStar corporate board.

“The things that will be reserve powers held by Marietta-based (WellStar) corporation will be issues such as the treasury function for our corporation, management of investment funds, oversight of capital investments, strategic planning and budgeting,” Fulks added.

The local board at WGH will still have a say in capital investment and planning, though, Fulks said. Proposals will be carved out at the local level and then presented to the WellStar board for consideration and potential approval, he said.

Additionally, senior management at WGH will stay in place.

A community advisory board is also slated for creation to allow community input into the hospital’s operation. The total size and scope of that board is still under consideration.

Significant improvements in the financial health of WGH have been made since its multimillion-dollar deficit-ridden days in the first half of this decade. Still, Fulks said that the WGH-WellStar partnership is in the best interest of the community.

“Our long term perspective has not changed one bit with the realization that being part of a larger, basically similar-thinking organization is for the benefit of our community,” he said. “We would not be able to afford the technology that’s necessary for population health management that already exists within the WellStar system, not to mention the intellectual capital they have invested in both physician practice management and the overall delivery of health care.

“We’re going to learn a ton of things from our friends and future colleagues that would have taken us years to do on our own,” he said.

WellStar’s CEO, Saunders, said she and her company are “looking forward to working with the WGH team.”

“We’re so pleased to begin the integration discussions so that we can continue to work together to meet the health care needs of our community,” she said.

While both boards have approved the partnership agreement, the entities must still seek approval from the state Attorney General’s office. That process is expected to take about three months, according to a press release from WGH.

WGH said in a statement it plans to submit the filings to the state AG’s office by mid-November and a public hearing would be held in Troup County as part of the regulatory approval process.

The two hospital systems plan to begin integration of the facilities in early 2016, according to a statement by WGH.