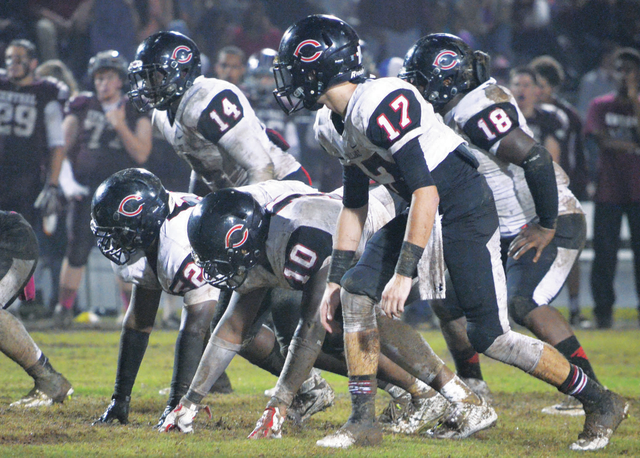 Callaway’s Cedric Maynard takes off on a run during Friday’s 21-14 victory over Central-Carroll that wrapped up the Region 5-AAA championship. Callaway hosts Hart County in the first round of the state playoffs on Friday. Kevin Eckleberry | Daily News

http://lagrangenews.com/wp-content/uploads/sites/37/2015/11/web1_maynard.jpgCallaway’s Cedric Maynard takes off on a run during Friday’s 21-14 victory over Central-Carroll that wrapped up the Region 5-AAA championship. Callaway hosts Hart County in the first round of the state playoffs on Friday. Kevin Eckleberry | Daily News Callaway’s defense gets lined up during Friday’s region-championship victory over Central-Carroll. Callaway has made it to the state playoffs for the 10th straight season. Kevin Eckleberry | Daily News

http://lagrangenews.com/wp-content/uploads/sites/37/2015/11/web1_CHS29.jpgCallaway’s defense gets lined up during Friday’s region-championship victory over Central-Carroll. Callaway has made it to the state playoffs for the 10th straight season. Kevin Eckleberry | Daily News

HOGANSVILLE – The last time the Callaway Cavaliers went 9-1 and won a region championship, they reached the semifinals of the state playoffs.

Is history about to repeat itself?

The Cavaliers put the wraps on a 9-1 regular-season with a 21-14 victory over Central-Carroll on Friday in the Region 5-AAA title game.

Callaway now turns its attention to the state playoffs, beginning with its first-round opponent, Hart County.

Hart County had a terrific regular season of its own.

The Bulldogs, under the direction of veteran head coach William Devane, went 7-3, and while they had a respectable 4-2 record against Region 8-AAA opponents, they finished in fourth place.

Before Friday’s 43-27 loss to Jefferson, Hart County had won four in a row.

If Hart County had beaten Jefferson, it would have won the region championship, but the loss knocked it all the way down to fourth.

Callaway and Hart County will play at Callaway Stadium on Friday at 7:30 p.m.

If Callaway wins this week, it would be at home once again the following week against either Westminster or Southeast Bulloch.

For Callaway, playing this time of year is nothing new.

This is the 10th consecutive season the Cavaliers have made it to the playoffs, and they have won at least one playoff game in six of their previous trips to state.

Callaway’s best playoff run came in 2013 when it reached the Class AAA final four before falling to Buford 24-14.

Callaway heads into the playoffs this time around with plenty of momentum.

Since dropping their season opener to LaGrange, the Cavaliers have won nine straight games, including Friday’s dramatic win.

Central-Carroll, which was going for a second straight region title as well as back-to-back perfect regular seasons, rallied from a 14-0 deficit to pull even in the fourth quarter.

Callaway scored the go-ahead touchdown with 2:54 remaining in the game on a 6-yard quarterback keeper by Dylan Johnson.

Senior running back Cedric Maynard, who surpassed the 2,000-yard barrier during the game, set up the touchdown with a 71-yard run to the 5-yard line.

Central did a respectable job defending Maynard, but he still ran for 229 yards on 30 carries with a touchdown.

Maynard finished the regular season with some remarkable numbers.

Callaway scored its first two touchdowns in the opening half.

On the Cavaliers’ first possession, Johnson scored on a 2-yard run, and Noah Stephens made the first of three extra-point attempts to give his team a 7-0 lead.

In the second quarter, Maynard had a 29-yard scornig run, and Callaway led 14-0.

Central got a big touchdown shortly before the half to pull within seven, and it scored on a long pass play in the third quarter to tie it at 14-14.

Callaway’s defense made a huge fourth-down stop in the fourth quarter, and the offense responded with the go-ahead touchdown.

Callaway clinched the victory when linebacker Dre Martin intercepted a pass in the closing moments.

After a Maynard first-down run, Callaway was able to line up in the victory formation, and Johnson kneeled down to end it.