Men up front getting it done for Callaway 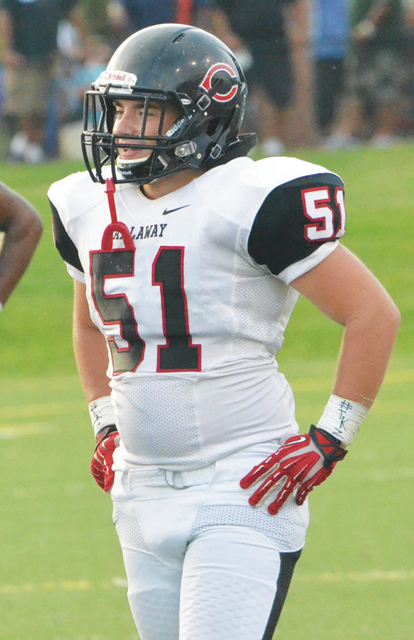 Stephen Curtis, John Curtis and Keiondre Jones stand on the sideline during last week’s 21-14 victory over Central-Carroll that secured the Region 5-AAA championship. Those three have helped make the offensive line a position of strength this season. Kevin Eckleberry | Daily News

http://lagrangenews.com/wp-content/uploads/sites/37/2015/11/web1_CHS31.jpgStephen Curtis, John Curtis and Keiondre Jones stand on the sideline during last week’s 21-14 victory over Central-Carroll that secured the Region 5-AAA championship. Those three have helped make the offensive line a position of strength this season. Kevin Eckleberry | Daily News Senior Cortney Laye is a three-year starter on the offensive line for the Callaway Cavaliers. Kevin Eckleberry | Daily News

http://lagrangenews.com/wp-content/uploads/sites/37/2015/11/web1_11-12-callaway6.jpgSenior Cortney Laye is a three-year starter on the offensive line for the Callaway Cavaliers. Kevin Eckleberry | Daily News HOGANSVILLE – Callaway’s Cedric Maynard has it all.

He has the power to shrug off tackle attempts, the vision to find an opening, and the speed to leave the defenders in his wake.

No matter how talented a running back is, though, he can’t do it by himself.

He needs a hole to run through, and Maynard has had plenty of those this season thanks to the contributions of a talented group of offensive linemen.

The offensive line has been affected by injuries this season, most recently when Laye missed a handful of games, but whoever has been in the game has produced.

“Those guys up front, they’ve been a good group all year,” Callaway head coach Pete Wiggins said. “We’ve battled injuries, we’ve had guys playing out of place and learning new positions. I’ve been really proud of their focus.”

That focus has helped Maynard run for more than 2,000 yards in 10 games.

Stephen Curtis said he and the other offensive linemen take a lot of pride in Maynard’s success.

“It feels good,” Curtis said. “It feels like we’re a part of every yard he gets.”

Laye, a three-year starter on the offensive line, said the linemen were glad to see Maynard surpass 2,000 yards in last week’s win over Central-Carroll.

“For him to rush over 2,000 yards, it’s great,” Laye said. “Cedric, he hits the hole, and he runs hard. He runs over people. And everything we do is to get him out there, get him on the safeties. We’re just blocking hard for him. I feel like we’re a very big part of that 2,000 yards.”

Laye returned to the lineup just in time for that Central game.

After missing two games with an injury, Laye was anxious to jump back into the lineup, and he helped Callaway beat Central 21-14 to win the Region 5-AAA championship.

“It’s my senior year, so I want to give it everything I’ve got, every game,” Laye said. “It’s great to be back.”

Laye said the offensive line has “gotten a lot better” throughout the course of the season.

“We’re just coming to practice every day and working hard,” Laye said. “We’re all just coming together, getting the job done. That’s the way we do it.”

Stephen Curtis, who has amassed a lot of playing time over the years, said the offensive line really came together when everyone settled into the right spot.

“We’ve made some moves, and everybody’s played a lot of different positions,” said Curtis, who plays one of the guard positions. “I feel like we’re in the best spot to succeed now.”

The other senior on the line besides Laye and Curtis is an imposing presence.

Bowles weighs in at more than 300 pounds, and he has done an excellent job from his center position.

Hodge, a junior, has been a force on the offensive line as well.

The offensive lineman with the least experience is Jones, a freshman who has been in the starting lineup since Day 1.

Before he’d even played his first high-school game, he’d received a handful of scholarship offers, including one from the University of Georgia.

As talented as Jones is, though, he’s still a freshman, and Laye said he has helped him out throughout the season.

Laye is the team’s right tackle, while Jones is the left tackle.

“We’re both playing tackle, so I know how to get things done,” Laye said. “I try to help with everything I can, try to make him the best linemen he can be.”

It has also been a learning season for the two sophomores, John Curtis and Thompson.

Curtis has had a pretty good mentor in his brother, Stephen Curtis.

At one point this season, as injuries caused the linemen to move around, John Curtis and Stephen Curtis were lined up right next to each other.

“This is the first time we ever played right beside each other,” Stephen Curtis said. “That was fun.”

Wiggins, who is the position coach for the offensive linemen, said those players “battle every week.”

“They’re a smart group of kids,” Wiggins said. “There’s a lot of different defenses we have to adjust to. They do a great job with that.”

While they’re not technically offensive linemen, tight end Michael Freeman and fulback Brandon Boddie are a big part of the team’s blocking scheme as well.

“They do a great job blocking, and they’re physical,” Wiggins said of Freeman and Boddie. “Again, they understand their roles on Friday night.”

The wide receivers also do a nice job of blocking when Maynard gets downfield.