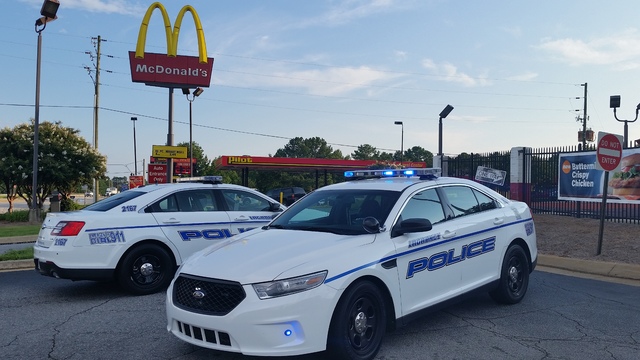 LaGrange police officers and investigators swarm the McDonalds restaurant off Whitesville Road on Sept. 3 after it was robbed at gunpoint.

http://lagrangenews.com/wp-content/uploads/sites/37/2015/11/web1_WEBMCDarmedrobbery.jpgLaGrange police officers and investigators swarm the McDonalds restaurant off Whitesville Road on Sept. 3 after it was robbed at gunpoint.

Ellis was charged with armed robbery, aggravated assault, cruelty to a child in the first degree, and felony fleeing and eluding after he allegedly robbed the McDonalds restaurant at 2408 Whitesville Road at gunpoint on Sept. 3, according to detectives with the LaGrange Police Department.

After the robbery, officials said the 19 year old jumped in an SUV with his girlfriend, Monique Quarterman, 30, and her 8-year-old daughter, and led police on a brief chase.

According to troopers with the Georgia State Patrol, Ellis drove the wrong direction up Interstate 85 at speeds well over 100 miles per hour. Troopers eventually performed a PIT maneuver, causing the teen to crash the car.

Police said no one was hurt in the wreck. Quarterman and Ellis were immediately arrested and taken to jail.

According to Senior Assistant District Attorney Lynda Caldwell, detectives are also looking into robberies in Manchester, where the couple lived, that had a similar “M.O.” (method of operation).

She also told Keeble a bench warrant has been issued for Ellis’ arrest in Bulloch County, near Savannah.

After hearing the case, Keeble denied any motion to set bond.