Panthers look to close with a win 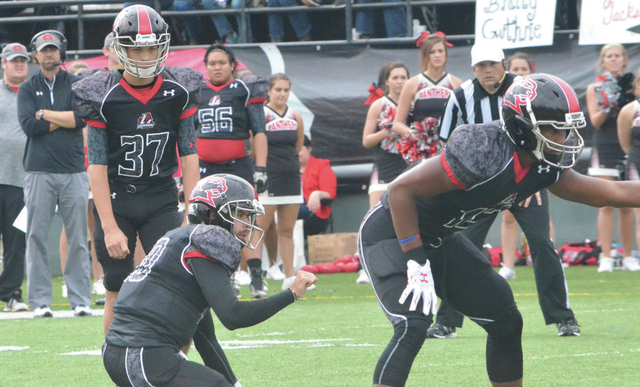 LAGRANGE – They’ll try to finish with a flourish.

The LaGrange College Panthers will put the wraps on their season when they travel to Fayetteville, N.C. today to face the Methodist Monarchs.

The game features a pair of teams that have been on the wrong end of a bunch of close losses this season.

The Panthers (2-6 overall, 2-3 in USA South) have only won a pair of games, but they’ve been close so many times.

Four of LaGrange College’s losses were by seven or fewer points, and that included three losses by a combined 11 points to begin the season.

It’s been a similar journey for Methodist.

The Monarchs (3-6, 1-5) have lost four games by eight or fewer points, and they’ve dropped their past two games to Ferrum and Greensboro by a combined five points.

Even with all the close losses, LaGrange College headed into its game at Maryville on Oct. 31 with its conference championship hopes fully intact.

The Panthers led by 14 points early in the second half of that game, but they ended up losing 38-31.

The good news for the Panthers is many of the players who have spent so much time on the field this season will be returning next year, so they’ll have a chance to use their experiences from this season as a learning tool.

“Moving forward, the sky’s the limit for us,” LaGrange College head coach Matt Mumme said last week. “These guys, they’ve got to take a lot of positives out of this year. That’s what we’ve been talking about this week is just looking at what you did good. It’s easy for people to say hey, you made this mistake you lost, but there were a lot of positives in those games. I’m trying to drag those positives out, and tell the guys, and show the guys, look, let’s move forward.”

The Panthers have shown they can compete with the elite teams on their schedule.

The next step, obviously, is finding a way to finish things off.

The season began with a 29-28 loss to Birmingham Southern.

LaGrange College had a 28-16 lead in the fourth quarter, but Birmingham Southern rallied for the one-point win after returning an interception for a touchdown in the closing moments.

The following week, is was another heart-breaker.

Berry College made a fourth-down stop at the goal line late in regulation before kicking a field goal in overtime to win 16-13.

LaGrange College then returned home and dropped another close one, with Ave Maria holding on for a 28-21 victory.

Then came the brutal loss at Maryville.

The Panthers came into that game having won two of their three previous games to improve to 2-1 in the conference.

LaGrange College had a 10-point lead with less than six minutes remaining, but Maryville scored 17 straight points to win 38-31.

That loss ended the Panthers’ hopes of winning a conference title.

One of the bright spots for the Panthers this season has been the performance of sophomore quarterback Connor Blair, who is completing 63 of his passes while averaging more than 300 yards per game.

Blair has thrown 17 touchdowns with 10 interceptions.

Those three players have combined for 128 catches and 13 touchdowns.

Lavell Meeks has also had a big season with 22 catches and three touchdowns, and Untorrey Thomas has 16 catches and a touchdown.

Seventeen players have caught a pass this season, and eight of them have at least one touchdown reception.

Mumme swaps wide receivers in and out frequently during the game, and he’s also been doing the same thing with the offensive line.

One of the offensive linemen who has gotten a lot of playing time this season is Jason Hernandez, a freshman from Troup High.

“We have 10 O-linemen that have game experience, and most of them are freshmen and sophomores,” Mumme said.

The Panthers aren’t a prolific running team, but Jamarkis Holmes and Nick Searcy each have a pair of touchdowns, and Drew Lewiski has one touchdown.

Nearly every one of the key contributors on offense will be returning next season, which should bode well for the team’s prospects in 2016.

“That’s what this game is all about is growing these guys up, and getting them to that point where they have a lot of experience,” Mumme said.

Nick Raszeja, a senior linebacker, headlines the LaGrange College defense with a team-leading 63 tackles, including 4.5 tackles for loss with 3.5 sacks.

Defensive back Brandon Penn has been a big-time play-maker with 58 tackles, and he leads the team with three interceptions.

Demetrius Rodgers anchors the defensive line with 50 tackles, and he’s tops on the team with 13 tackles for loss.

Defensive lineman Royce Owens has 35 tackles with four tackles for loss, and defensive back Kenneth Bell has 28 tackles, and he leads the team with 10 pass breakups.

Defensive back Jordan Daniels has 27 tackles and two interceptions, and freshman linebacker Nick Walker has 21 tackles.