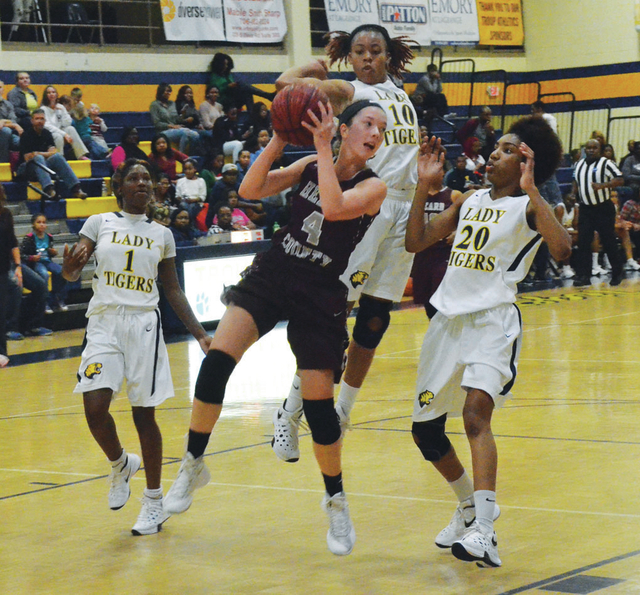 LAGRANGE – The Troup Tigers are surging.

The Tigers lost their season-opening game to the Newnan Cougars, but they’ve won four of five games since then, including Friday’s hard-fought 40-28 victory over the visiting Heard County Braves.

It was a low-scoring game, with both offenses playing at a deliberate pace, and Troup head coach Paul Brewer wasn’t complaining about the lack of points.

“We knew it was going to happen,” Brewer said. “They were going to do to us, what we’re trying to do to other people. You can’t change who you are to play somebody else.”

Leading by four points heading into the fourth period, the Tigers created some separation, going on a 10-0 run to go up by 14.

Heard County came no closer than nine points the rest of the way.

“They were moping, because they almost felt like they lost,” Brewer said. “We tried to tell the guys, we survived. The teams we play, we hope they have the same frustrated feeling.”

Senior Isaac Moss had the hot hand for the Tigers with 19 points, and Dexter Shealey added eight points.

Brewer said the team was doing a nice job running the offense in the first half, but the players were having a hard time finishing.

“From an execution standpoint, we weren’t very good early,” Brewer said. “We missed some layups and some free throws.”

The Tigers only scored eight points in the third period, but they were able to extend their lead to 23-19 heading to the fourth period.

Heard County trailed by eight points at one point in the third period before getting within two.

Moss hit a jumper with three seconds left in the third quarter to give the Tigers a four-point lead, and that momentum carried over into the final period.

The Braves scored the next five points to get within nine, but Moss answered with a three-point play to put the Tigers back up by 10, and the lead was double digits the rest of the way.

In Friday’s girls’ game, Troup rallied in the fourth quarter to make a game of it, but it was Heard County claiming the 55-45 win.

The Lady Tigers trailed by 15 points early in the fourth period, and they got within seven with more than four minutes to play.

The comeback stalled at that point, and Heard County held on for the road win.

“We didn’t rotate tonight,” Troup head coach Carla Thornton said. “There were too many open baskets. They scouted us, did a good job, but we still didn’t do what we were supposed to.”

Heard County maintained a double-digit lead throughout the third quarter, and Troup trailed 38-25 as the final period began.

Heard County scored moments into the fourth quarter to go up by 15, and that’s when Troup came to life.

Troup got as close as seven once more when Spence came up with a steal and passed the ball to Gilbert for a basket that made it a 48-41 game with 2:40 to play.

That’s as close as the Lady Tigers came.

“It’s a learning experience,” Thornton said. “They’ll learn from it. They didn’t quit.”