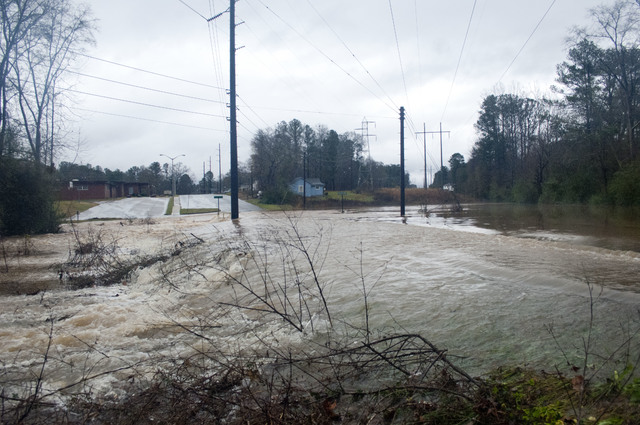 A creek flows in a mobile home park off Hogansville Road where residents were briefly evacuated Thursday after record rainfall.

http://lagrangenews.com/wp-content/uploads/sites/37/2015/12/web1_RainRoundup03WEB.jpgA creek flows in a mobile home park off Hogansville Road where residents were briefly evacuated Thursday after record rainfall. According to AccuWeather forecasting, 3.37 inches of rain fell on the area as severe thunderstorms made their way through west Georgia. The deluge washed out several roads, completely tearing apart a section of Plymouth Drive in the Heritage Hills subdivision and Perkins Drive. No injuries were reported as a result of the rainfall, according to Troup County 911.

“They have been placed there for everyone’s safety,” the post said. “Once the road has been deemed safe, sheriff’s office or road department personnel will remove them.”

At least two families were displaced Thursday when their homes flooded. One family on Leathea Drive had to evacuate their home and law enforcement officers had use a boat to rescue other residents of a home near Gabbettville Road.

The LaGrange Fire Department also briefly evacuated residents of a mobile home park off Hogansville Road after a creek swelled pasted its banks, tearing at least one large propane tank from a residence. Firefighters were able to secure the tank and prevent leakage, according to fire Lt. Chris Taylor, a spokesman for LFD.

Rainfall wasn’t the only record broken during the week. On Friday, Christmas Day, temperatures soared to a balmy 76 degrees, according to AccuWeather. The normal high temperature for the day is 57 degrees.

Elsewhere in the Deep South, the unseasonably violent weather spawned deadly tornadoes Wednesday and forced families to spend Christmas Eve taking stock of their losses. At least 14 people were confirmed dead — seven of them in Mississippi, including a 7-year-old boy who perished while riding in a car that was swept up and tossed by storm winds.

Six people were killed in Tennessee and one in Arkansas. Dozens of homes were damaged or destroyed.

In Columbia, Tennessee, those killed included three people who were found in a car submerged in a creek, according to the Columbia Police Department. The Tennessee Emergency Management Agency said the victims were a 19-year-old female and two 22-year-old males.