Looking back at a special year 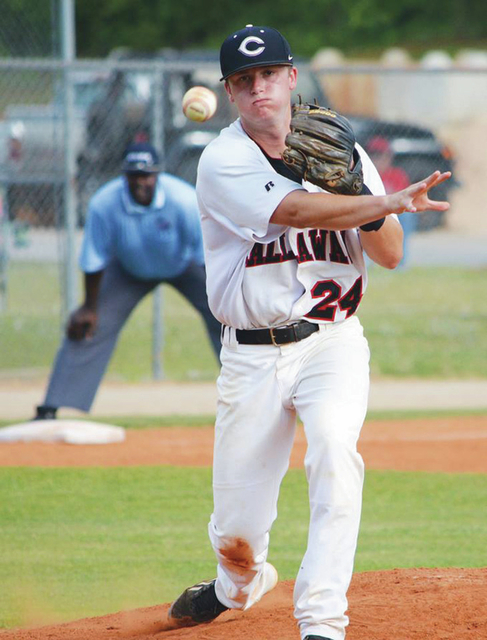 Lafayette Christian assistant coach Glenn Quiggle celebrates with the fans toward the end of a state-championship victory over Central-Christian. Kevin Eckleberry | Daily News

http://lagrangenews.com/wp-content/uploads/sites/37/2016/01/web1_cougars2.jpgLafayette Christian assistant coach Glenn Quiggle celebrates with the fans toward the end of a state-championship victory over Central-Christian. Kevin Eckleberry | Daily News

Troup’s Winston Turner is congratulated after hitting a home run last season. The Tigers went 25-6 and reached the second round of the state playoffs. Kevin Eckleberry | Daily News

http://lagrangenews.com/wp-content/uploads/sites/37/2016/01/web1_troup-baseball.jpgTroup’s Winston Turner is congratulated after hitting a home run last season. The Tigers went 25-6 and reached the second round of the state playoffs. Kevin Eckleberry | Daily News

The Callaway Cavaliers won a third straight region title last year on the way to a quarterfinal appearance in the state tournament. Kevin Eckleberry | Daily News

Danterrius Bray and the LaGrange Grangers won a region title and made it to the state quarterfinals. Kevin Eckleberry | Daily News

http://lagrangenews.com/wp-content/uploads/sites/37/2016/01/web1_bray.jpgDanterrius Bray and the LaGrange Grangers won a region title and made it to the state quarterfinals. Kevin Eckleberry | Daily News

Perry Keith helped lead the Callaway baseball team to a region title and a berth in the state quarterfinals. Kevin Eckleberry | Daily News

http://lagrangenews.com/wp-content/uploads/sites/37/2016/01/web1_keith.jpgPerry Keith helped lead the Callaway baseball team to a region title and a berth in the state quarterfinals. Kevin Eckleberry | Daily News

LAGRANGE – What a year it was.

There were so many special moments, so many outstanding performances by the teams and athletes in Troup County.

As I always do with the dawn of a new year, I’ll look back at the year that was, to reflect on the many accomplishments of the men and women who make covering sports in this community so much fun.

In today’s story I’ll take a look at some of the highlights provided by the local schools.

On Monday, we’ll have a story reflecting on some of the other highlights from 2015 involving recreation sports, college and professional sports, and more.

So here are some of the highlights from a year that has now been relegated to the history books, and here’s hoping a new year brings plenty more memorable moments.

BREAKING THROUGH: After reaching the semifinals of the eight-man state football playoffs in 2013 and 2014, the Lafayette Christian School Cougars won it all last season.

It was a fitting way for a group of seniors who accomplished so much to bid farewell to high-school football.

“It’s a team full of brothers,” senior Jemi Reed said after the championship game. “Everybody rallied together. We all had one dream, and we accomplished it.”

Another senior, Eli Shepherd, said “it feels great” to finish his prep career with a state title.

“My mission has been completed,” he said. “Coming in to camp, I said my mission was to win state. That was my main goal, and it’s very special to complete that on this field.”

After finishing second in the GICAA state tournament in 2013 and 2014, LaGrange Academy won it all in 2015 by beating Furtah prep 2-1.

Will Trotter made the game-winning goal with less than two minutes remaining.

“To finally get over the hump, it meant so much, especially it being my senior year,” said Zach Callaghan, who scored 26 goals this season. “It meant everything. It was amazing.”

It was a special moment for coach Mike Petite, who had led soccer teams from the school to the state-championship game five previous times, only to fall short each time.

THE BOYS OF FALL: The Callaway football team continued to thrive under head coach Pete Wiggins.

The Cavaliers won the Region 5-AAA championship with a hard-earned road win over Central-Carroll to end the regular season, and they finished with a 10-2 record after falling to eventual state champion Westminster in the second round of the state playoffs.

Senior running back Cedric Maynard had a remarkable season, running for nearly 2,500 yards while scoring 26 touchdowns.

LaGrange went 5-5 and failed to reach the state playoffs after losing to Columbus in a mini-playoff game, and Troup went 1-9 under first-year head coach Tanner Glisson.

LaGrange beat Callaway and Troup to win the county championship.

WINNING SPRING: It was a spring to remember for the baseball teams from Callaway and Troup.

The Troup Tigers won 13 consecutive games at one point and finished with a stellar 25-6 record, making it one of the winningest seasons in school history.

Unfortunately for the Tigers, the season ended sooner than they hoped with a loss to Wayne County in the second round of the state playoffs, but it was still a fantastic spring.

It was a talented team that included senior catcher Jonathan Foster, who is now a member of the Auburn baseball team.

“I hate it for our seniors that they have to go out like this,” Troup head coach Craig Garner said. “For the ones coming back, they’ll remember and learn from it, and be better for it next year.”

It was also a terrific season for the Callaway Cavaliers, who won the Region 5-AAA championship and made it to the quarterfinals of the state playoffs.

Callaway was led by seniors Kevin Craft and Perry Keith, who were named the region’s co-pitchers of the year.

“We’re fortunate to have those two guys,” Callaway head coach Dusty Hubbard said. “We know they’ll both go out and compete.”

The LaGrange Grangers also made it to the state playoffs, with senior pitcher Tristain Daugherty leading the way.

In his final high-school game, Daugherty pitched a complete game as LaGrange beat Evans 2-1 in the second game of a playoff series against Evans.

Also making it to state was the LaGrange Academy baseball team.

CHEER SUCCESS: The Troup High cheerleaders capped a special season by earning a spot on the podium at the state competition in Columbus.

After making it through the sectional round, Troup returned to the mat for the state finals.

Troup’s strong performance was enough to secure a sixth-place finish in Class AAAA.

“We couldn’t be any prouder of this group of kids,” Troup coach Amelia Key said. “They’re dedicated, they’ve worked hard, they’re talented. To top it off, we only have one senior. They’re going to come back in ready to go for the title next year. They’re already talking about it today. They’re excited, and have a lot to look forward to.”

LaGrange’s cheerleading team also made it to the state finals and finished 11th in Class AAAAA.

“They’ve had a mission all year. Their mission honestly is to make it to state,” LaGrange coach Stephanie Hall said. “Class AAAAA in the cheerleading world is extremely difficult. There are some very talented teams. We knew going in it would be difficult. They had had perfect routines both days. They were excited. We couldn’t ask for anything more.”

Callaway’s cheerleading team also had a big season and made it through to the state competition.

At the state meet, Pelham had two top-10 finishes in his final high-school competition, and he went on to sign with Georgia to run track and field and cross country.

Bowie also had two top-10 finishes in the distance events.

For the LaGrange girls’ team, Alaina Tomlinson had a sixth-place finish in the 3,200-meter run.

In cross country, Bowie’s final cross-country race was an exceptional one.

Bowie raced to a third-place finish at the state meet in Carrollton, while Tomlinson finished 16th in the girls’ meet.

The boys’ and girls’ teams from Callaway and LaGrange both competed in the state meet.

BASKETBALL PROWESS: The boys’ basketball teams from LaGrange and Callaway both won region championships last season and made it to the quarterfinals of the state tournament.

LaGrange, with Mike Pauley in his final season as the head coach, won the Region 1-AAAAA title and reached the elite eight before losing a close one.

The Callaway Cavaliers, with veteran head coach Terry Hayes leading the way, won a third consecutive region championship and advanced it to the Class AAA quarterfinals.

Also making it to the state tournament were the girls’ teams from Callaway and LaGrange, as well as both teams from Lafayette Christian School.

LaGrange Academy’s girls’ basketball team won a region championship and made it to the second round of the GICAA state tournament.

Facing Houston County in the first round of the Class AAAAA state tournament, LaGrange won it on penalty kicks to reach the second round.

Goal keeper Sara Kate Doerr made a big stop during the penalty-kick shootout to preserve the win.

Also getting a win on the state level was the LaGrange High boys’ tennis team that reached the second round of the state tournament.

Paschal was fourth in the 100-yard backstroke, and she was fifth in the 50-yard freestyle.

WRESTLING STRONG: The 2014-2015 wrestling season offered plenty of highlights for the local teams.

LaGrange won an area championship before earning a top eight finish in the state duals.

Troup finished second in its area duals, and it went on to record a top eight finish in the state duals as well.

For Callaway, freshman Justin Kiss earned a place on the podium at the state meet with a fifth-place finish.

TEEING IT UP: LaGrange’s Devin Bray completed a successful high-school golf career by finishing fourth in the state setional to reach the state finals.

Among Bray’s highlights during his time as a high-school golfer was a region championship as a freshman.

PANTHER PRIDE: There were plenty of special moments for LaGrange College’s sports teams in 2015.

The top highlight was provided by the golf team, which had a sensational season that ended with a second-place showing at the NCAA Division III national championship.

LaGrange College’s softball team won the USA South tournament title to earn a spot in the Division III national tournament, and they finished with a stellar 25-16 record.