End of the road for LaGrange seniors 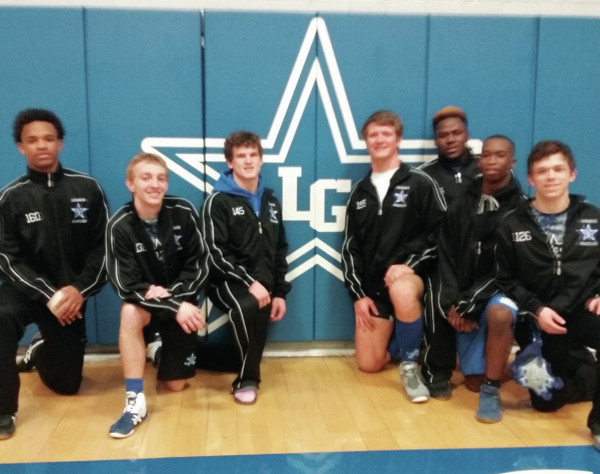 LaGrange’s Matt Watford greets his opponent from Heard County before their match on Monday. Watford was one of the six Grangers honored during the senior-day ceremony. Kevin Eckleberry | Daily News

http://lagrangenews.com/wp-content/uploads/sites/37/2016/01/web1_LHS6-1.jpgLaGrange’s Matt Watford greets his opponent from Heard County before their match on Monday. Watford was one of the six Grangers honored during the senior-day ceremony. Kevin Eckleberry | Daily News

LAGRANGE – He’s not ready for it to end.

Before LaGrange High’s match against Haralson County on Monday, the team’s six seniors were honored, including Matt Watford, who has had a terrific season.

Watford has been a part of previous senior nights, but this was one obviously held special significance for him since he was one of the men being honored.

“It’s kind of heart-breaking,” Watford said after LaGrange beat Heard County for its second win of the night. “I watched senior nights before, and it didn’t mean too much too me. You congratulate the seniors. But now I’m a senior. I see what it means.”

Fortunately for Watford, and his teammates, Monday wasn’t the team’s final match on the home floor.

On Saturday, LaGrange will host the Area 1-AAAAA traditional meet, with the top four competitors in each weight class qualifying for the state sectionals.

“Thankfully, we get to wrestle back home again Saturday,” Watford said. “I’m excited about that. I’m ready to start my road to state.”

The Grangers didn’t face much opposition on Monday.

After beating Haralson County 72-3, LaGrange closed with a 66-10 victory over Heard County, with all six of the seniors getting plenty of time on the mat.

Some of them have been wrestling together since middle school, so there have been a lot of long practices, a whole bunch of bus rides to and from competitions, and Watford said it’s all been great.

“We’re all family,” Watford said. “Everybody on the team. We treat each other like brothers, we’ve got each other’s backs.”

Shirey said “it’s hard” knowing he won’t be wrestling with his friends and teammates for much longer.

“It’s been fun,” he said. “I’ve enjoyed my four years here. Some of them I’ve been wrestling with since the seventh grade. And this is our last year together. It’s hard. But we’ve got one more this weekend.”

Two of LaGrange’s most successful wrestlers over the years are Wegienka and Mann, who have been teammates since they were eighth-graders at Gardner Newman.

Wegienka has had a phenomenal senior season that has included championships in the Chattahoochee River Wrestling Association tournament, the Hardaway Invitational and the Gary Silva Invitational.

He has only dropped three matches, and two of those came early in the season while he was making the transition from football.

Mann, a teammates of Wegienka’s on the football team, has also had a superb season, and he won a championship at the Chattahoochee River Wrestling Association tournament.

Weathers appreciates everything Mann and Wegienka have done for the program over the years.

He compared Wegienka to two of the best wrestlers he’s had at LaGrange, Archie Dudley and Tony Palmer.

“Guy’s got a special place on my heart,” Weathers said. “I hugged his neck before he went out. It was hard watching him. They don’t make them like that anymore. He’s like another Archie, like another Tony Palmer.”

Weathers said as much as Mann has accomplished during his career, he’s hungry for more.

Wegienka said it’s been a fun ride with his good friend Mann, who everyone calls “Mayo,” and all of his teammates.

“I’ve wrestled with Mayo since middle school,” Wegienka said. “We’ve always been together. I love all these guys to death. Everyone of these guys, I wouldn’t trade them for anybody in the world.”

Mann, who along with a handful of his teammates will be signing a letter of intent to play college football next week, said the four years “went fast,” and he’s glad he stuck with the sport, largely because he feels it made him a better football player.

“I do it for football,” Mann said. “That’s my reason. It helps me. It helps me with my speed. There ain’t nothing like wrestling. I don’t care what nobody says.”

Mann said he’s “looking forward to these next weeks” that could end with him walking away with a medal at the state meet.

Another one of the seniors, Johnson, has not been a regular member of the lineup this season, although he has produced when he gets his chance.

During a match against Heard County on Monday, Johnson came through with an impressive pin, giving him a lasting memory.

Weathers said Johnson used a move the Grangers call the Bayou to get his pin.

“It’s from a wrestler who used to wrestle here from Louisiana,” Weathers said. “We called him the Bayou. Here it is on senior night, and he did it. What a way to finish.”

Johnson called his time as a LaGrange wrestler “a blessing.”

“All these people I get to meet. We’re making a bond together,” Johnson said. “We’re all brothers now. That’s something you can never get back. We’ll be a family until the end. Wrestling, it’s always been been a blessing for me. It’s hard in practice. But it’s worth it.”

Copeland, who was a standout on the football team last season along with Mann and Wegienka, said he has enjoyed getting to know his wrestling teammates over the years.

“It’s fun,” he said. “It’s all different personalities. Y’all get together, and you find out how much you have in common.”

Wilson is the newest member of the LaGrange wrestling family.

It’s been an interesting journey for Wilson, who transferred from Troup to LaGrange last month.

While he’s a newcomer to the team, he said he has been received warmly.

“When I came here, they opened their arms for me, they said they’re happy to have me,” Wilsons aid. “I like them a lot. I do miss some of the guys over (at Troup). But you have to move on.”