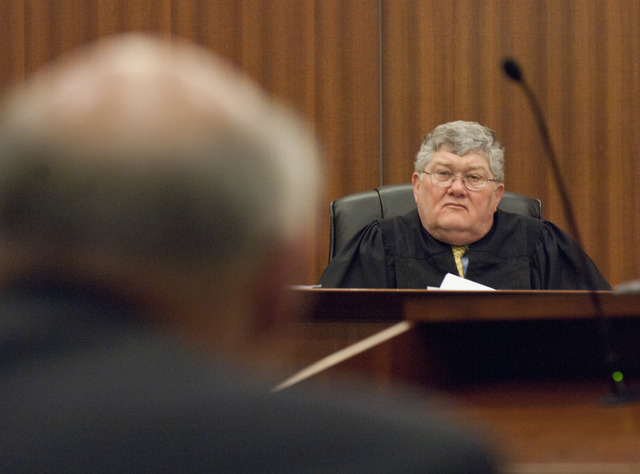 LaGRANGE — Accolades, diplomas and an Eagle Scout award dated Oct. 1, 1957, are among the hangings on the beige walls of Chief Judge A. Quillian Baldwin’s third floor chambers in the county courthouse on Ridley Avenue.

If those walls could talk, they would undoubtedly tell countless stories of difficult decisions and solitary moments of contemplation.

For more than 20 years, Baldwin, 73, has presided over some of the most serious cases in the Coweta Judicial Circuit, a five-county region that includes Troup. On Friday, though, he said goodbye as he hung up his familiar black robe and retired.

“I’ve been extremely lucky. I’ve had opportunities to do things that as a boy I never dreamed I would do,” he said with a laugh. “The whole thing has been very rewarding.”

Life has been kind to Baldwin. He’s been a father and husband, a lawyer and state senator who rose to being the senior of seven judges hearing cases across west Georgia.

“You’d like to always make the right decision, but later sometimes you find out you’ve been reversed by the appellate court, and that’s just the way it works,” he said. “I know I’ve done my best to try to make good decisions.”

Baldwin, originally from Madison, was appointed to the bench in September of 1995 by Gov. Zell Miller after practicing domestic and real-estate law. Before that, he served in the Georgia Senate from 1985 to 1991 where he was chairman of the Senate’s judiciary committee.

Although he said he’s enjoyed his time on the bench, his expression peaks when he talks about his time as a state senator.

“I loved being in the state senate,” he said. “It’s truly an opportunity to help people, especially people who are having problems with the state.”

He recalled a constituent who was having difficulties paying for cancer treatment. Working through state channels, Baldwin said he was able to connect the man with a government program that helped him receive the treatment he needed.

“We helped him live a longer life than he would have otherwise,” Baldwin said.

On the bench, Baldwin said he’s spent the majority of his time in criminal cases, but by far the most interesting cases were often civil.

He recounted a case that originated in Henry County involving a church that’s members sought to break away from their nationally affiliated organization, which owned the brick-and-mortar property. The parishioners and the national church were engaged in a legal battle — one in which Baldwin eventually sided with the national church.

Over the years, Baldwin has seen significant changes to the judicial system in Georgia. During his tenure, he’s witnessed the creation of specialized courts for veterans, the mentally ill and drunken drivers. Overall, he said he views those changes as positive and adaptive.

He’s also seen tremendous growth in the region. Just a few years ago, a state commission investigated the possibility of splitting the five-county Coweta Judicial Circuit. Ultimately, the idea was shelved — partially, Baldwin said, because of the opposition of some judges in the circuit.

Baldwin, though, thinks a split might ease case loads and make things move more smoothly in the circuit.

“Especially for the district attorney’s office,” he said.

Although Baldwin officially retired Friday, he said he plans to continue to hear cases when needed. After he retires, he’ll become a senior judge and can be called to fill in for other judges when necessary, he said.

A judicial nominating committee is currently seeking candidates to replace Baldwin, and nominees selected by the committee will be presented on a short list for Gov. Nathan Deal to appoint a replacement.

Currently, every one of the seven judges in the Coweta Judicial Circuit is a white man.

When asked if the committee should seek more diversity in the circuit, perhaps a woman or person of color, Baldwin didn’t balk.

“I’m sure he (the governor) would consider that,” Baldwin said. “The nominating committee are good folks, and anybody who’s qualified can be nominated.”