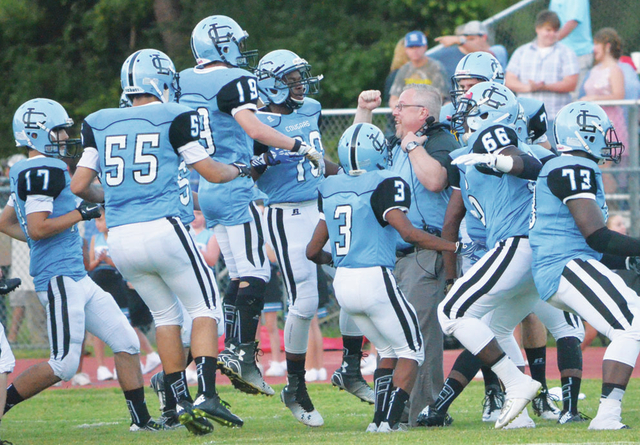 Lafayette Christian School’s Devon Taylor gets a shot away in the second half of Monday’s win over Heirway Christian. Kevin Eckleberry | Daily News

http://lagrangenews.com/wp-content/uploads/sites/37/2016/02/web1_cougars1.jpgLafayette Christian School’s Devon Taylor gets a shot away in the second half of Monday’s win over Heirway Christian. Kevin Eckleberry | Daily News

LAGRANGE – They needed two overtime periods to make it happen, but the Lafayette Christian School Lady Cougars are state-bound.

Facing Heirway Christian in the first round of the region tournament on Monday, Lafayette Christian survived for a 59-56 victory on its home floor.

It was a big win.

The Lady Cougars not only advanced to the semifinals of the region tournament, but they secured a spot in the Georgia Independent Christian Athletic Association state tournament.

Lafayette Christian will play top-seeded Central Christian at 4 p.m. on Thursday, with the winner advancing to Friday’s region-championship game.

Lafayette Christian School’s boys’ team is the top seed in the region tournament, and it will host a semifinal game on Thursday at 7 p.m.

“They want to keep winning,” Lafayette Christian School girls’ coach Paula Johnson said. “They weren’t ready to turn in their uniforms. That’s a stepping stone for them. They really pulled through together, they played as a team, and they played hard. They didn’t give up. We can do all things through Christ.”

It helped that the Lady Cougars had Abbey Hudson on their side.

Hudson scored 27 points, with 16 of those points coming in the second half and overtime.

Hudson’s performance was especially impressive considering she was just a few days removed from an ankle injury.

She hurt herself on Thursday, and she only played a few minutes in Friday’s game against Arlington Christian before the injury forced her to leave the game.

Late in the third quarter, it looked like the Lady Cougars would enjoy a suspense-free victory.

When Hudson scored with 2:19 left in the third quarter, the Lady Cougars were ahead 38-26, but by the close of the period their lead was down to 38-32.

Heirway Christian continued the comeback in the fourth quarter, and with 4:15 left in the game, it had a 43-42 lead.

Back came Heirway Christian, which scored the final five points of regulation to tie it at 48-48, and it was on to overtime.

Hudson and Kloster scored back-to-back baskets to give Lafayette Christian a 52-48 lead, but Heirway Christian scored the next four points to tie it at 52-52, and that was the score at the close of the first overtime period.

In the second overtime period, Kloster, Hudson and Taylor each scored as the Lady Cougars were finally able to put the game away.

It was a one-point game when Kloster scored with six seconds remaining to push the lead to three, and Heirway was unable to tie the game with a 3-pointer.