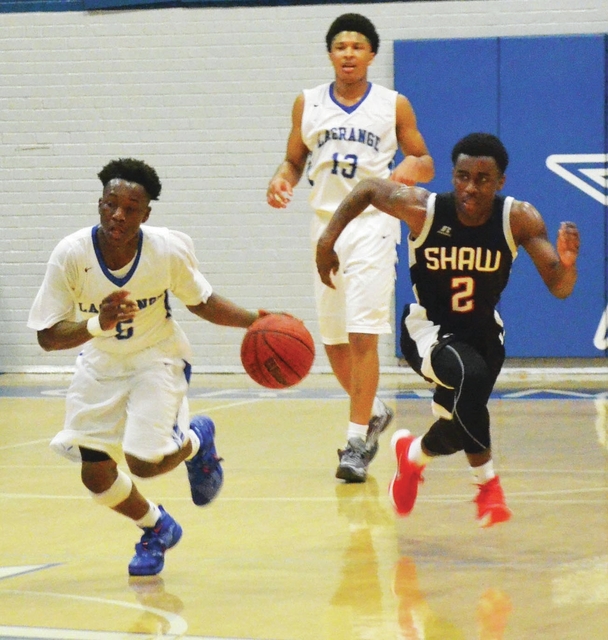 With the LaGrange Grangers trailing by one point late in Saturday’s Region 1-AAAAA championship game against the Shaw Raiders, senior guard Derieko Smith ended up with the ball in his hands.

There was enough time for LaGrange to set up a play, to move the ball around and try to find a shot.

Instead, Smith drove the length of the court and laid the ball in amidst a host of Shaw defenders, giving the Grangers a one-point lead with nine seconds left.

The Raiders had a chance to reclaim the lead, but a potential game-winning shot bounced harmlessly off the rim, giving the Grangers a come-from-behind 56-55 victory before a boisterous crowd at LaGrange High.

The Grangers were down by as many as 10 points in the fourth quarter, but a furious late-game charge gave them win, and the accompanying number one seed for the state tournament.

The Grangers will be at home on Wednesday to face Drew in a first-round game, and if they win, they’ll host a second-round game on Saturday.

That the Grangers found themselves involved in a game that came down to the wire wasn’t surprising.

None of their past five games have been decided by more than six points, and that was Friday’s 67-61 win over Northside in the region semifinals.

Two of those close games were against Shaw.

LaGrange beat Shaw 63-61 in a regular-season game, and it won by one point on Saturday.

LaGrange won its three games against Shaw this season by a combined 10 points.

“Shaw played good tonight,” LaGrange head coach Mark Veal said. “They mixed some things up defensively, and they were doing some things offensively to basically control the tempo. And we had to beat them for the third time. In baskeball, when you have to beat a team three times, that is not easy.”

There was nothing easy about Saturday’s win.

The Raiders led 46-39 after three quarters, and a little more than a minute into the fourth period, they’d built the lead to 10 points.

The Grangers needed to start finding some offensive success, and they did.

Back came the Raiders, who took a 55-53 lead with a little more than 30 seconds remaining.

LaPerion Perry made one free throw to make it a one-point game with 29 seconds left, and after a Shaw turnover, Smith went coast-to-coast for the go-ahead basket as the crowd exploded.

After Shaw couldn’t connect at the buzzer, LaGrange had the win, and the celebration was on.

With the game on the line, Veal had no problem with Smith having the ball in his hands.

“We wanted Rico to have the ball out there,” Veal said. “He’s been struggling here of late with his shot some, but he’s still just a valuable asset to our team.”

As for the game-winning shot, it wasn’t easy.

When Smith got near the basket, he had to weave his way through a host of defenders to get to the basket, and he somehow avoided having the shot blocked.

Veal said a bunch of players made major contributions, including Duckett, who knocked down some critical shots in the fourth quarter.

In Friday’s semifinal win over Northside, it was senior Qua Epps who hit some big shots in the fourth quarter, and a day later, it was Duckett filling that role.

Veal said that’s an indication of the team’s depth.

“We go 10 deep every night,” Veal said. “(Against Northside), Qua Epps was a factor. Tonight, Gabe was a factor. Last night, Bryan Fanning was the guy we had in the game late. Tonight, Kenan (Gray) was. We’ve got different guys that come off the bench and perform.”

LaGrange will begin its state-tournament run against Drew, which finished fourth in Region 4-AAAAA.

If LaGrange wins that game, it would host either Heritage or South Paulding in the second round on Saturday.

LaGrange gets a semifinal win over Northside By Kevin Eckleberry keckleberry@civitasmedia.com LaGrange’s LaPerion Perry gets around a defender during the... read more