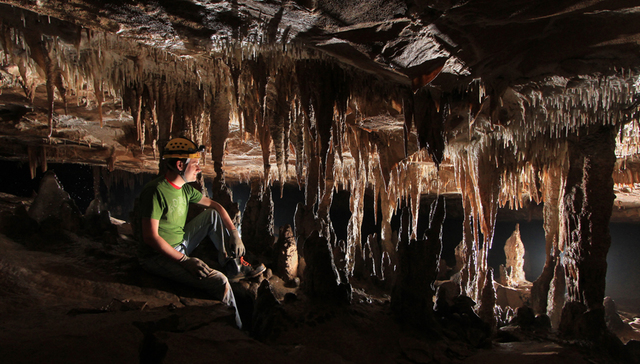 Daily News reporter Tyler H. Jones, right, and caver Jason Rains, originally from LaGrange, pose for a photograph in front of a waterfall inside Rusty’s Cave on Sunday.

http://lagrangenews.com/wp-content/uploads/sites/37/2016/02/web1_Cave02WEB.jpgDaily News reporter Tyler H. Jones, right, and caver Jason Rains, originally from LaGrange, pose for a photograph in front of a waterfall inside Rusty’s Cave on Sunday.

A caver climbs out of the 50-foot-deep entrance of Rusty’s Cave during an expedition in March 2012.

http://lagrangenews.com/wp-content/uploads/sites/37/2016/02/web1_Cave05WEB.jpgA caver climbs out of the 50-foot-deep entrance of Rusty’s Cave during an expedition in March 2012.

A salamander is photographed inside Rusty’s Cave in March 2012.

http://lagrangenews.com/wp-content/uploads/sites/37/2016/02/web1_Cave06WEB.jpgA salamander is photographed inside Rusty’s Cave in March 2012.

Caver Brad Barker looks at geologic formations inside Rusty’s Cave outside Rising Fawn during an expedition in March 2012. The cave is one of the deepest and most well preserved in Georgia, according to the Southeastern Cave Conservancy.

http://lagrangenews.com/wp-content/uploads/sites/37/2016/02/web1_Cave01WEB.jpgCaver Brad Barker looks at geologic formations inside Rusty’s Cave outside Rising Fawn during an expedition in March 2012. The cave is one of the deepest and most well preserved in Georgia, according to the Southeastern Cave Conservancy.

RISING FAWN — Sliding down a thick white rope Sunday, metal carabiners clink and adrenaline pumps as cavers repel downward to a trickling stream that flows in the darkness below.

Here, in the entrance to Rusty’s Cave on Fox Mountain, a 50-foot chute tests the modest repelling equipment that separates cavers from certain misfortune.

On successfully reaching the floor, pebbles crunch together under feet as cavers land in the shallow stream and unclip their harnesses.

The air is warm — about 60 degrees year-round — and thick with moisture. As eyes adjust to the darkness, they follow the stream downward into the cave where boulders the size of Volkswagens force decisions about which is safer: “up or under?”

Rusty’s Cave, named for 1960s cave explorer Rusty Mills of Forest Park, is one of 11 caves within the Southeastern Cave Conservancy’s Fox Mountain Preserve in Northwest Georgia. Because of its challenging vertical entrance, the cave is one of the most well preserved and is among the deepest in the state, according to the conservancy.

Deep beneath the mountain, slowly dripping groundwater has built calcium-rich stalactites that hang in the thousands from the ceiling above. Jerry Wallace, who manages the preserve for the conservancy, said the formations inside Rusty’s Cave are delicate structures created over centuries.

“They’re unique and they’re nonreplaceable,” he said. “Most of the mineral formations have taken thousands of years to form and are fragile. Once they’re destroyed, they’re not coming back.”

The difficult entry to Rusty’s Cave has largely protected its geologic shapings from destruction. In some less challenging caves, such as Pettyjohn’s Cave in Pigeon Mountain outside Lafayette, the easy horizontal entrance has given way to overuse by recreational cavers and careless explorers have broken formations and left graffiti and garbage.

Reaching the rocky floor of Rusty’s Cave is a dangerous affair, and Wallace cautions the inexperienced against flippantly trying to shimmy down a rope to go exploring. Safe entry takes proper equipment and training, he said.

“If you get hurt in a cave, it can sometimes take days to be rescued,” he said. “You can not only injure yourself, but also the rescuers who are coming in after you. The best way to be prepared is to get involved with organized cavers.”

Even the most experienced cavers can quickly find themselves in extreme danger inside these alluring and ancient natural wonders, Wallace said.

Mills, who discovered Rusty’s cave and after whom it is named, was killed at age 18 while trying to rescue a group of Boy Scouts inside Howard’s Cave outside Trenton in 1966. According to an April 17, 1966, article in the Gadsden Times, Mills and another rescuer suffocated to death during a rescue attempt following an explosion in the cave. Investigators at the time believed the explosion, which burned up the cave’s oxygen, was caused by a build up of flammable gas inside one of the cave’s chambers. It was likely sparked by an open-flame lantern carried by one of the scouts.

Despite the inherent hazards of caving — more formally known as spelunking — enthusiasts across the southeast flock to these spectacular caverns to lay eyes of underground waterfalls, exotic species of amphibians and insects and, of course, bats.

Jason Rains, a first-time caver originally from LaGrange, was one of a party that explored Rusty’s Cave on Sunday. He said he was struck by the unfamiliar domain and tested by the experience.

“The thing that sticks out in my mind, I think, is the alienness of the environment,” he said. “There’s a sense that you’re not supposed to be there and that the terrain is indifferent to your presence.”

Rains said he climbed out of the cave understanding the necessity of being prepared for the expedition and having competent guides who have the right equipment.

“It doesn’t feel like a place that’s made to accommodate humans,” he said. “You can go there, but you’re kind of on your own. There’s not a path for you to follow, and there’s nothing inside to help you.”

“People are often just not equipped for the environment,” he said. “They watch a YouTube video or do some Internet research and buy some equipment. … People are educating themselves off the Internet and we all know the Internet is a clearinghouse of bad information.”

Cressler echoed Wallace’s advice and said people who are interested in caving should contact groups of experienced cavers.

He also said the work of the Southeastern Cave Conservancy and the National Speleological Society, a caving association, has been instrumental in protecting caverns not just in Georgia, but across the South.

“The conservancy has tried to buy caves that have previously been unavailable because landowners didn’t allow it,” he said. “They purchase them and make them accessible, but it’s still a private organization and a private cave, and they must be respected.”