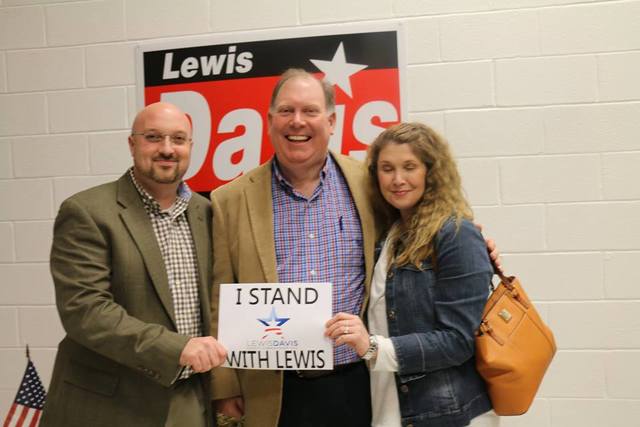 A photograph taken Feb. 25 during a campaign fundraiser shows Troup County Board of Elections and Registration member Jason Creel, left, pose with Lewis Davis, center, a candidate for Troup County Board of Commissioners District 3. Multiple, independent sources have told the Daily News that Creel did not violate any laws by showing support for Davis.

http://lagrangenews.com/wp-content/uploads/sites/37/2016/03/web1_DavisCreelWEB.jpgA photograph taken Feb. 25 during a campaign fundraiser shows Troup County Board of Elections and Registration member Jason Creel, left, pose with Lewis Davis, center, a candidate for Troup County Board of Commissioners District 3. Multiple, independent sources have told the Daily News that Creel did not violate any laws by showing support for Davis.

LaGRANGE — A photograph recently posted on social media shows a member of the local elections board posing with a candidate for county commission while holding a sign of support.

It’s raised a few eyebrows, but is it illegal? The short answer, according to State Elections Board member David Worley of Peachtree City, is no.

“Generally speaking, members of boards of elections are appointed and chosen by their respective political parties, and it’s not at all unusual to participate in supporting candidates,” said Worley, who has served since 2004 as the Democratic Party of Georgia’s representative on the State Elections Board.

The photograph was posted March 6 on the campaign Facebook page of Lewis Davis, a Republican running for Troup County Board of Commissioners’ District 3. In the photo, which Davis said was taken at a campaign fundraiser Feb. 25, Davis is standing next to Jason Creel, a Troup County Republican Party appointee to the county’s Board of Elections and Registration. Creel, along with a woman, is holding a sign that says “I stand with Lewis.”

Davis, who resigned as the Troup County GOP chair Dec. 31 to run for county commission, said he’s known Creel for many years and they have both a personal and professional friendship.

“I’m the president of the Kiwanis Club, and he serves in Kiwanis with me,” Davis told the Daily News. “He’s a personal friend of mind and we’ve had a business relationship for some time.”

Davis, a home builder, said he buys carpets from Creel, who by trade manages the Flooring America Mill Store on Hamilton Road.

The candidate went on to say he never intended to create any implication of impropriety and thinks some have blown the photograph out of proportion.

“If we were going to try to hide something, the last thing I’d do is take a picture,” Davis said. “I feel like this is a character assassination attempt. … It was not done (the photo) with ill intent. I have a feeling this is going to be an ugly campaign, but I’m going to try to keep it ‘above board’ as much as possible.”

Creel similarly called the allegations of misconduct “a little extreme,” and said he was surprised by the criticism.

“The funny thing is, we weren’t trying to hide this,” Creel said. “Lewis is a personal friend of mine. He built my house and I’ve known him for years. I’m kind of shocked that these people see this as me doing something wrong. It caught me off guard.”

Marc Hershovitz, an Atlanta attorney who specializes in election and campaign law, said the photograph might not have been the best idea, but Creel was within his First Amendment rights to support Davis, as long as it’s not in his capacity as an elections board member.

“He wasn’t conducting duties of that office,” Hershovitz told the Daily News by phone. “He wasn’t holding the sign while sitting in the board meeting, he was doing it outside. That’s the argument that it’s permissible.”

On the flip side, Hershovitz said people might see the photograph and have their suspicions.

“The common sense is this is where you go above the letter of the law,” Hershovitz said. “You say, I’m not supposed to do this, and I’m always a member of the board of elections, whether I’m in a meeting or not, and I shouldn’t engage in political activity on behalf of a candidate.”

“Does the public draw a distinction between him sitting in a meeting, versus his everyday life? No. That’s reasonable. It creates an appearance of impropriety,” he said.

Candice Broce, a spokesperson for the Georgia Secretary of State’s office, which oversees elections, said local county attorneys should help advise election board members on what is and isn’t proper conduct.

“It’s really up for legal interpretation,” Broce said. “We can’t say one way or another how to interpret it. That’s a function of the board and they have a county attorney who they rely on for that interpretation.”

An email and phone call to Mark DeGennaro, an attorney who advises the elections board for the county, were not answered by press time.

Hershovitz, the Atlanta campaign attorney, said hopefully Creel won’t be asked to vote on anything that would affect the outcome of the District 3 commission race, but if he is, the safe option would be to abstain from casting a vote.

“If there’s no issue that comes up with that particular race before him, then no harm, no foul,” he said. “But, a good argument can be made that if that guy (Davis) is in a contested primary, and some issue regarding that race has to be decided by the board of elections, a good argument can be made that that individual (Creel) needs to disqualify himself.”

“I would abstain, just to keep from anybody thinking I had any influence,” he said. “Absolutely.”

When overseeing elections, the board doesn’t do much heavy lifting. Rather, the county elections board is on-hand to oversee the county’s elections supervisor, Andy Harper, and other paid county staff. The board does not tally votes, county employees do.

“The idea that I could affect elections as far as results is just absurd to me,” Creel said. “We’re an oversight committee, not a working board.”