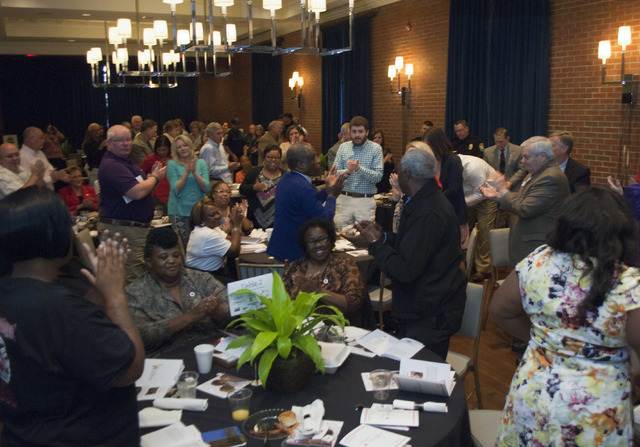 The awards recognize local individuals whose extraordinary acts of courage or kindness make them a hero, according to the chapter.

This year’s award ceremony focused on local people who have made a difference in the lives of others every day through simple acts of thoughtfulness or compassion — but also through unexpected and exceptional ways.

The following individuals were named the chapter’s 2016 Hometown Heroes:

Regina Andrews has been helping others through fundraising for more than 20 years. She has raised funds for the LaGrange Pregnancy Center, Emmaus Shelter, Boys and Girls Club of West Georgia and many others. She is a member of the Troup County Board of Realtors and has helped raise funds for that organization as well. One of her most recent fundraising accomplishments was selling more than 140 quarts of chili to raise funds for Twin Cedars Youth Services. West Georgia Health sponsored her award.

Ann Baker helps serve others as a volunteer chaplain for the LaGrange Police Department and with West Georgia Hospice. She was recognized as the first female chaplain at LPD and actively participates in the Men and Women of God ministry. She is involved in the nonprofit Community Action for Improvement and is an in-home, biweekly Bible study leader for the elderly. She is married to Dr. George Baker, a dentist, and they have three children, four grandchildren and one great-grandchild. Commercial Bank and Trust sponsored her award.

Faye Benjamin and Becky Grubbs are both retired school teachers who are passionate about educating children about Biblical teachings, schoolwork, conversation and playtime. For the past nine years, the duo has led the My Father’s House ministry and dedicate three afternoons each week to caring for children there. Most of the children are elementary school age, but Benjamin and Grubbs have a reputation for keeping up with youngsters who’ve passed through their ministry, as well as maintaining a support network for them as they grow older. CharterBank sponsored their awards.

Montest Cameron has been working with youth in the community for 31 years and is involved with Teens R Us Girls Club, where she helps provide positive activities for young ladies. She serves as a role model and mentor for many young people in the community and is known for her love of helping people. She holds leadership positions in the LaGrange Civic Improvement Club and the Troup County Coalition. She is married to Carlton Cameron and they have four children and nine grandchildren. West Georgia Technical College sponsored her award.

Josh Clower is a K9 patrol officer with the LaGrange Police Department. He and his K9 partner, Deek, track and apprehend dangerous criminals, but also help find lost individuals, such as Alzheimer’s patients. He was once wounded on the job and is known for placing a great sense of professional duty before his own safety. LaGrange Television, LGTV, sponsored his award.

Sara Jenkins, a Hogansville resident, has a long-standing passion for helping children and youth through sports and dancing. She is the director of God’s Grace Dance Ministry, where she helps young people express their faith through music and dance. She has received numerous honors for her work impacting and making a difference in the community. She is married to Tommy Jenkins, and they have four children, five grandchildren and two great-grandchildren. The LaGrange Grocery Company sponsored her award.

The Rev. Max McCord, a LaGrange native, is the founder and retired pastor of Rosemont Baptist Church, where he served for 32 years. The church began in the 1960s with 16 members and has grown to more than 1,200 members. He is known by his parishioners as a compassionate and caring leader with a genuine care for people in need. He became pastor emeritus in 2011 but is still active in the church. He has been married to his wife, Marion, since 1957 and they have three children, 10 grandchildren and a growing number of great-grandchildren. Interface sponsored his award.

The Rev. Bob Patterson of Warm Springs has been pastor of Warm Springs Baptist Church for 30 years. He has worked to make Meriwether County a better place to live and play by serving in many community organizations not only as a member, but also a leader. He and his church founded a soccer league in Meriwether County and he is a member of the Family Connection Partnership. He is a board member of West Georgia Technical College and a past president of a Rotary club. He has worked for years to improve the educational and community opportunities for Meriwether County. Humphries Garden Solutions and Kimble’s Events by Design sponsored his award.

Keith Bonner and Eric Rogers are firefighters with the Troup County Fire Department’s station 11 in Hogansville. They were honored for going “above and beyond the call of duty” in April when they responded to a situation where a family was mourning the death of a family member and one of the members collapsed. Their skills kept other family members calm as they saved the person’s life. Diverse Power sponsored their awards.