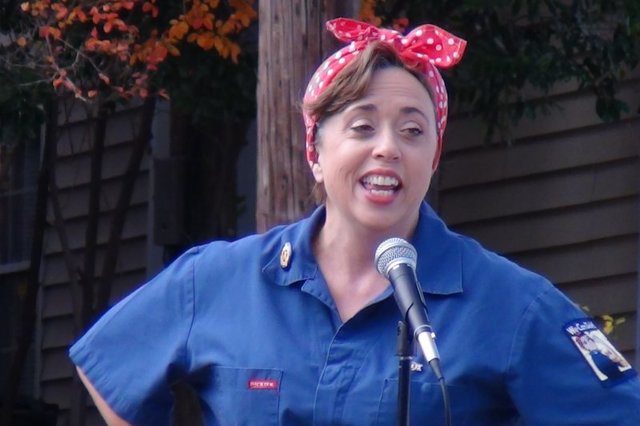 Carol Cain performs as Rosie the Riveter in this undated handout photo.

http://lagrangenews.com/wp-content/uploads/sites/37/2016/03/web1_Carol-Cain.jpgCarol Cain performs as Rosie the Riveter in this undated handout photo.

LAWRENCEVILLE — After performing as Rosie the Riveter for more than 20 years, Troup County storyteller and retired teacher Carol Cain was honored by the National Society Daughters of the American Revolution on March 20.

Receiving the Women in American History honor was a surprise to Cain.

“I didn’t realize how big and nice an honor it is,” Cain said. “It’s pretty exciting.”

Helen Dalton, the NSDAR Philadelphia Winn Chapter historian and the woman who nominated Cain, presented her with the honor.

“The DAR honored me for honoring them (the ‘Rosies,’ women who took on jobs during World War II),” said Cain. “If I’ve been successful in that (honoring them), then I’ve done what I’m supposed to do.”

Cain performed as Rosie the Riveter for the association in March 2015 for Women’s History Month.

“She really entertained and delighted us. We’re thrilled and honored to have her there with us,” said Lee Schermerhorn, publicity and media chair for the DAR.

Cain started performing as Rosie in 1994. Rosie the Riveter is a character who inspired women to help with the war effort during World War II.

“Clark Johnson (current Troup County historian) got me involved,” she said. “Clark and I were both teaching at Troup High School. Clark was very involved with Troup County Historical Society. He approached me in the fall of 1993.”

The society was doing a year-long series to commemorate the 50th anniversary of the end of World War II.

“He said, ‘We thought you could portray Rosie.’ And I responded, ‘Who?’” Cain said.

After a lot of research, Cain borrowed some props and performed the monologue in 1994.

“She would tell her story, and I would do my presentation,” Cain said.

Over the years, Cain met lots of different “Rosies.” Some performed with her. Others would tell their stories at the end of Cain’s performance.

Cain has met women who helped with the war effort in different ways. One woman shared her story of working on the Manhattan Project, and another described her job as putting decals on American planes, including the Enola Gay, the plane that dropped the atomic bomb.

“It’s important for me to be their voice and their ear,” Cain said. “They realized they should be telling their stories.”

The American Rosie the Riveter Association was founded on Dec. 7, 1998. Since her grandmother rolled bandages for the Red Cross, Cain is considered a “Rosebud” member — a descendant of a “Rosie.”