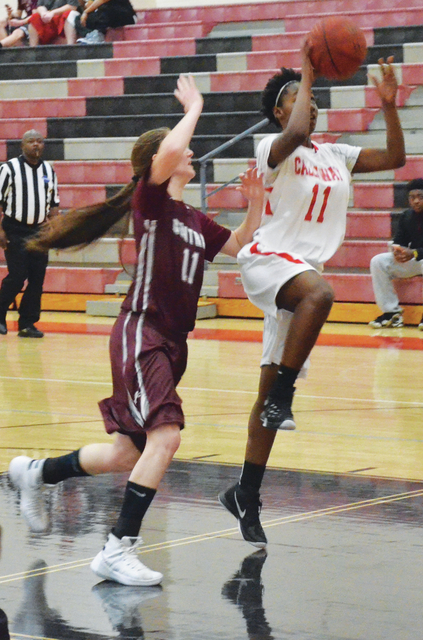 Callaway’s Trace Hicks fights for the ball during the first half. Kevin Eckleberry | Daily News

http://lagrangenews.com/wp-content/uploads/sites/37/2016/04/web1_CHS12.jpgCallaway’s Trace Hicks fights for the ball during the first half. Kevin Eckleberry | Daily News

HOGANSVILLE – There was no post spring-break hangover for the Callaway Cavaliers.

As the Cavaliers arrived at their home field for Wednesday’s Region 5-AAA soccer match against the Haralson County Rebels, it had been a few weeks since they’d played a game, and they didn’t practice at all last week during spring break.

The Cavaliers returned to practice on Monday and had a spirited session according to head coach Jake Hembree, though, and they had no trouble with the Rebels in Wednesday’s game.

With Grayson Lambert and Noah Hill each scoring three goals, Callaway rolled to a 9-0 victory.

The Cavaliers (6-4 overall) evened their region record at 3-3, and they’re right in the thick of the playoff chase.

The Cavaliers are looking to chase down one of the region’s four state-playoff spots, and they still have a shot at finishing second, which means they’d host a state game.

After Friday’s non-region game against Brookstone, Callaway will play four games next week, including three against region opponents.

Callaway plays at Cedartown on Monday, and after a non-region home game on Tuesday against Spencer, it finishes the week with region road games against Rockmart on Wednesday and Central-Carroll on Friday.

“We’ve got some big games coming up,” Hembree said. “Next week’s going to be crazy with four games in one week. Hopefully we can still be standing by next Friday for our last one.”

Cedartown is running away with the region’s top spot with an 8-0 record, Pepperell is in second place at 5-2, and Callaway (3-3) and Central-Carroll (3-4) hold down the next two spots.

Rockmart is still in the playoff race with a 2-4 record, and Haralson County is 0-8.

Hembree believes the Cavaliers still have a great chance to finish second in the region if they play like they’re capable of.

“The number two spot in the region is still open,” Hembree said. “We just have to show up and play. We’ve got to pressure, and we’ve got to play hard all the time.”

In Wednesday’s game, Callaway had no problems with the region’s last-place team.

The Cavaliers surged to a 5-0 lead at the half, and they continued to pour it on in the second half.

While Callaway took 37 shots, Haralson County only got two shots on goal, and sophomore goal keeper Hugo Lopez was there for the stop both times.

While Lambert and Hill each had a hat trick, Jonathan Castillo, Chase Drake and Khaliq Swift each had one goal.

Swift’s goal came as time expired in the second half.

While Lopez didn’t have a whole lot to do in Wednesday’s game, Hembree said he has been a bright spot of the team this season.

Callaway struggled in the goal-keeping department last season, so Hembree is glad to see someone excel at that position this spring.

“He’s a sophomore, so we’ve got some potential with him,” Hembree said. “Last year we struggled, but this year, it’s going good with him. We’re finally filling that position.”

Callaway’s girls’ soccer team will return to the field on Friday for a home game against Brookstone.

Callaway, which beat Pepperell 6-1 in its most recent game on March 24, is sitting in great position in the region with a 4-2 record.

For the Grangers, Blade Kendall, Pierce Skinner and Tony Choi each won in singles, and the doubles teams of Connor Mahan and Jas Singh, and Tiger Lakhwani and Gavin Battle also prevailed.

OF NOTE: For more photos from Wednesday’s Callaway soccer game, go to facebook.com/LDNsports