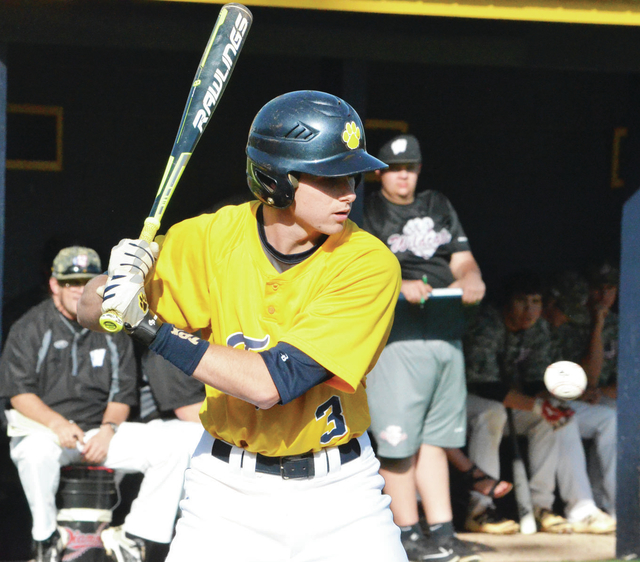 Troup shortstop Ryan Bliss makes a throw to first during Tuesday’s game. Bliss had a hit and two RBIs in the 10-2 win. Kevin Eckleberry | Daily News

http://lagrangenews.com/wp-content/uploads/sites/37/2016/04/web1_troup12.jpgTroup shortstop Ryan Bliss makes a throw to first during Tuesday’s game. Bliss had a hit and two RBIs in the 10-2 win. Kevin Eckleberry | Daily News

Troup first baseman Colby Darda gets in position during Tuesday’s game. Darda had a hit and an RBI. Kevin Eckleberry | Daily News

http://lagrangenews.com/wp-content/uploads/sites/37/2016/04/web1_troup6.jpgTroup first baseman Colby Darda gets in position during Tuesday’s game. Darda had a hit and an RBI. Kevin Eckleberry | Daily News

Troup’s Bo Halcomb, who had one of his team’s eight hits, watches a pitch sail across the plate. Kevin Eckleberry | Daily News

http://lagrangenews.com/wp-content/uploads/sites/37/2016/04/web1_troup8-1.jpgTroup’s Bo Halcomb, who had one of his team’s eight hits, watches a pitch sail across the plate. Kevin Eckleberry | Daily News

LAGRANGE – The Troup Tigers have the region championship sewn up, but they’re not about to take their foot off the accelerator now.

With the start of the state playoffs just a little more than a week away, the Tigers want to continue to stay hot and play well, so they’re approaching this week’s three-game series with Whitewater as though everything is on the line.

Troup is also looking to get a bit of payback from a year ago when it lost the region title after dropping two-of-three to Whitewater in the final week of the regular season.

“They beat us last year, so it’s kind of like revenge,” said Troup senior Payton Upchurch, who was the starting pitcher in Tuesday’s game. “And we want to keep the momentum going into next week.”

With Upchurch doing his part, Troup did indeed keep the momentum going with a 10-2 victory over visiting Whitewater in the series opener.

The left-handed Upchurch, who has been a critical member of the rotation this season, worked the first five innings to get the win, and freshman Colby Williams finished things off with two scoreless innings.

Senior outfielder Miles Cameron blasted a two-run home run to highlight the offensive effort, Ryan Bliss had a double and two RBIs, and Williams had a hit and drove in two runs as well.

Colby Darda got into the act with a hit and an RBI, and Winston Turner had a hit, two walks, and he along with Bliss and Cameron scored two runs.

Brandon Gay and Ken truitt also had hits for the Tigers, who improved to 19-5 overall and 12-1 in the region.

Troup will finish the regular season with two more games against Whitewater.

Whitewater will be the host team on Thursday, and the scene shifts back to Troup for Friday’s game, and that will be the regular-season finale.

Upchurch is a key reason the Tigers have enjoyed such success this spring.

A year ago, Upchurch was an effective pitcher, used mostly out of the bullpen.

“Last year, he really kind of earned his place in a relief role, especially middle relief,” Troup head coach Craig Garner said. “He ended up logging quite a few innings.”

As this season has progressed, Upchurch has become a regular member of the starting rotation, and he has performed admirably.

Upchurch has settled in as one of the starters along with fellow seniors Halcomb and Turner.

“He bumped in, and kind of solidified that number three role,” Garner said. “He’s got a sub-1.00 ERA, and that was either his fifth or sixth win of the season.”

Garner said one of Upchurch’s strengths is his ability to stay calm and collected, no matter the situation.

“He’s just one of those that if the bases loaded are with no outs, it doesn’t matter,” Garner said.

In Tuesday’s game, Upchurch didn’t allow a run through the first four innings, and he left the game after Whitewater scored twice in the top of the fifth.

“I was pretty happy,” Upchurch said when evaulating his performance. “It was a little rough toward the end, but overall it was good.”

At the plate, it took the Tigers a little while to get things going.

It was scoreless through the first three innings, but Troup busted it open in a five-run fifth inning that was highlighted by a Williams two-run single.

After Whitewater notched a pair of runs in the top of the fifth, Cameron got those runs right back with a home run in the bottom of the inning.

Turner walked with one out, and Cameron followed with a line shot that rocketed over the left-field fence.

“I think there’s a plug in the bank out there,” Garner said. ” That was a laser.”

Troup capped the scoring with three runs in the bottom of the sixth.

After Truitt was hit by a pitch and Halcomb singled, Bliss followed with a two-run double, and troup led 9-2.

With the bases loaded, Darda was hit by a pitch to drive in his team’s 10th and final run.