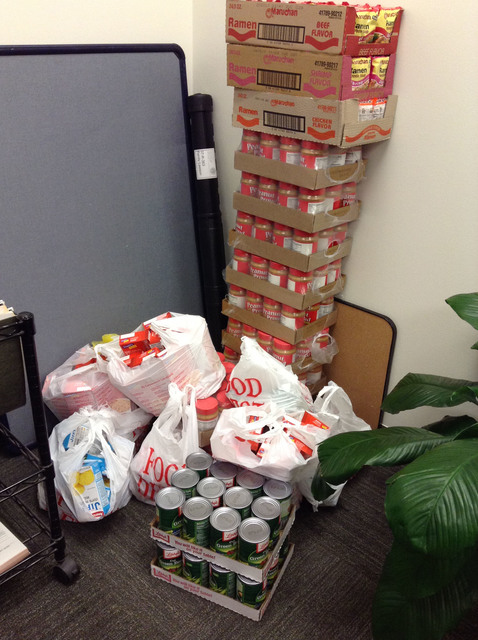 A stack of donated food sits at the Troup County District Attorney’s office. The office is collecting canned goods and nonperishable food items today and Friday for its inaugural Georgia Legal Food Frenzy.

LaGRANGE — Time is winding down as prosecutors and staff in the Troup County District Attorney’s office try and collect hundreds of canned good and nonperishable items for the inaugural Georgia Legal Food Frenzy.

The group started the fundraiser Monday and so far said it has been a success.

All the the food items will be given to the local food bank and help people in our community, he added.

The District Attorney’s office hoped to collect at least 750 canned goods and non perishable food items — if not more — by Friday when the fundraiser ends.

About one in four children — 28.2 percent — in the peach state do not have enough to eat, according to Georgia’s Food Bank Network. The organization also stated more than 1.8 million Georgians need food assistance every year.

The Food Frenzy food drive runs through Friday, April 29. Participants can drop off nonperishable food items 8 a.m. to 5 p.m. daily at the District Attorney’s office on the third floor of the Troup County Government Center.

Adams is also willing to meet folks downstairs and bring up food items they want to drop off. He can be reached at 706-298-3708. They will also accept monetary donations.

“Food banks have great spending power, so $1 to a food bank equals the purchasing power of about 4 pounds of food,” he explained.

Here is a list of some of the nonperishable items most needed by local food banks: