Artists bring ‘Artie’ back to life 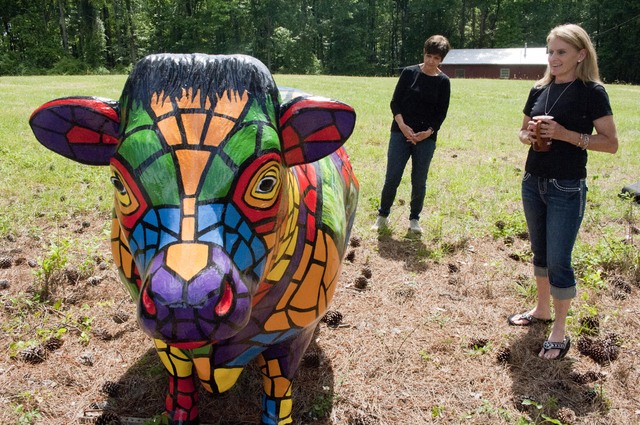 Joanna Baxter, left, and Ruth Hancock admire their artwork, ‘Artie,’ on Hancock’s farm in the 1300 block of Old Chipley Road on Wednesday afternoon.

http://lagrangenews.com/wp-content/uploads/sites/37/2016/04/web1_ColorfulCow01WEB-1.jpgJoanna Baxter, left, and Ruth Hancock admire their artwork, ‘Artie,’ on Hancock’s farm in the 1300 block of Old Chipley Road on Wednesday afternoon.

PINE MOUNTAIN — Life has been tough for Artie the steer, but it’s moo-ving in the right direction thanks to a pair of local artists.

Ruth Hancock and Joanna Baxter, both painters, breathed new life into the fiberglass bovine when they painted him with colorful shapes and impressionists paintings and displayed him on Hancock’s farm on Old Chipley Road.

“They’re all just impressionistic paintings,” Baxter said Wednesday. “We wanted it to be fun, not serious. He’s a fun cow and he’s had a hard life, so now he gets to have some fun.”

A hard life, indeed. Artie spent the first part of his life grazing the roof of a Bi-Lo grocery store, then made his way to a farm in southern Troup County, only to be stolen and hung from a tree by some juveniles in the early 90s.

He was recovered — thanks to the Troup County Sheriff’s Office — and even made the front page of the Daily News on April 14, 1993. The headline writer had some fun with the story, writing that the Troup County Sheriff’s Office was “taking the bull by the horns” with the investigation. Three 16 year olds were eventually charged with criminal damage to property and theft by taking, but the damage was done, Baxter said.

“When they hung him in the tree, they broke his horns off,” Baxter explained.

He sat on a farm off Old Chipley Road outside Pine Mountain, cracked and in disrepair until Hancock and her husband, Kirk, purchased the land a few years ago from Zak Webb, who owned Artie when he was stolen.

“The cow was definitely part of the deal,” Kirk Hancock said. “It was a deal breaker if he didn’t come with the farm.”

In 2014, Ruth Hancock brought Artie into her barn and set about repairing the fiberglass and envisioning his new life as a piece of impressionist artwork.

“He had a hole in him,” Ruth Hancock said of Artie. “Then, Kirk dragged me out of the country to Nicaragua. When I came back, we got started on him in October. I did the outlining of the black and got the colors on him. There’s six coats of orange, red, yellow and five coats of the green, blue and purple. It look me a long time.”

Ruth Hancock put more than 500 hours into restoring and reviving Artie, and Baxter helped her when she had the free time. Her inspiration for Artie came from Barcelona, Spain, where she visited about nine years ago. She explained that the city is adorned with mosaics and architecture by Antoni Gaudi, who used color to brighten the landscape. She followed that style to pattern Artie, then overlaid nine impressionist paintings across him.

For Ruth Hancock, bringing Artie back to life was a labor of love.

“The great thing about art is that it’s just mindless. It gets your mind off everything else,” she said. “When you dive in, you focus on your art.”

She explained that some people have hunting camps, but she’s not much of a hunter, so she’s created what she calls an “art camp” on her property where she and her friends get together, drink coffee and make art.

Just last week, she put the final coat of varnish on Artie and now he sits at the entrance of the Hancocks’ farm.

“He blends in here,” said Baxter.

Artie is on display in the 1300 block of Old Chipley Road, and the Hancocks hope passersby — especially school children riding the bus — will enjoy the sight. They invite people to take photos and visit Artie, but there’s two rules: don’t sit on him, and don’t steal the steer.