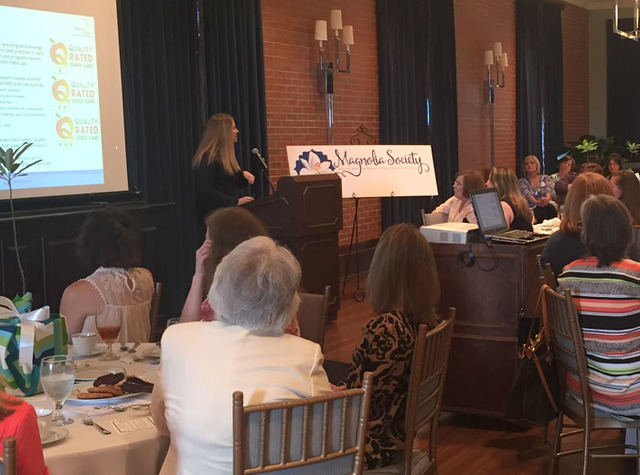 Kristin Bernhard, deputy commissioner for System Reform, Georgia Department of Early Care and Learning, speaks to the group on the importance of early learning in the trajectory of a child’s education.

http://lagrangenews.com/wp-content/uploads/sites/37/2016/05/web1_web0508Magnolia01.jpgKristin Bernhard, deputy commissioner for System Reform, Georgia Department of Early Care and Learning, speaks to the group on the importance of early learning in the trajectory of a child’s education.

The group met to learn more about the impact of early learning on the youngest residents of Troup County. Coordinated by the newly formed Magnolia Society, a Women’s Leadership Council of the United Way of West Georgia, the event featured guest speaker Kristin A. Bernhard, deputy commissioner for System Reform, Bright from the Start of the Georgia Department of Early Care and Learning.

The Magnolia Society purpose is to raise awareness on the importance of planting seeds for educational success starting from birth. Early learning involves the social, emotional, and intellectual development of children from birth to age 5 with a focus on high quality care and education so each child entering the school system has the tools needed to succeed.

Kristin Bernhard, who was introduced by Helen Rice, member and immediate past chairman of the State Board of Education, emphasized the importance of early learning by stating that 85 percent of brain development happens before age 5. She spoke of the importance of the Quality Rated system designed by the state, under which educators in participating child care programs undergo rigorous coaching and training on best practices in early childhood education, and receive technical assistance and classroom materials.

During the program Bernhard commended Troup County on efforts thus far in early learning Quality Rated accreditation, citing 47 percent of the child care capacity in Troup County is Quality Rated at a star level, which is higher than the state percentage of participating programs at 43 percent.

Bernhard concluded with a quote by Frederick Douglass: “It is easier to raise strong children than to fix broken men.” He then charged the room to continue to increase funding and support of the issue.

The society’s signature fundraiser has been named Merry Market, which is set for Oct. 20-22 at the Callaway Conference Center.

For more information, contact the United Way of West Georgia office at 706-884-8292 or Patty Youngblood at patty@unitedwaywga.org.