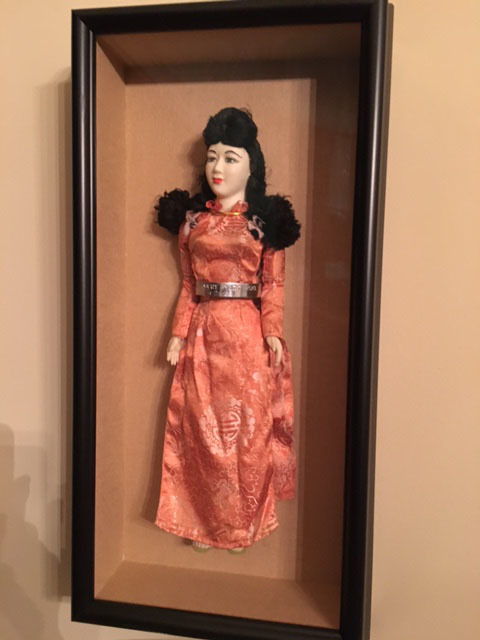 The Vietnamese doll with the POW bracelet of Maj. Robert Dyczkowski on its waist.

http://lagrangenews.com/wp-content/uploads/sites/37/2016/05/web1_web0526GendusaCOL.jpgThe Vietnamese doll with the POW bracelet of Maj. Robert Dyczkowski on its waist.

The war in Vietnam was raging by the time we graduated from high school in 1965. If you weren’t headed for college you were probably headed to war.

Some young men wanted to go into the military. A lifelong dream to serve their country was to soon be fulfilled. Many gave their lives for their dream. Way too many.

It was a difficult time to say the least. Protest, anger, death and politics mixed together in a boiling pot and spilled over into divisiveness and apathy.

Our young men came home to no fanfare or parades. They came home scarred both mentally and physically to a world that forgot to say “thank you” to the soldier who was just doing what he was told to do — to protect and serve.

In 1965 I was headed off to college and my brother was headed into the dark waters of North Vietnam. By August of that year, Lt. John Walker and his entire destroyer, the USS Pritchett, was nowhere to be found. The Navy offered no explanation as to their whereabouts.

Finally, after almost a year, a letter from President Lyndon Johnson was handed to my mother. The USS Pritchett had been on a secret mission. They had gone farther into North Vietnamese waters than any other ship had ventured before. Everyone on board was safe and on their way home. Praise God.

During John’s service in Vietnam I received a Vietnamese doll. These dolls became a symbol of the war to many. She came to me in traditional dress with a straw hat that hung by a strap down her back. She would move wherever I would go throughout my life, usually winding up safely tucked in a dresser drawer.

My brother finally arrived home in late 1966 after serving over four years in the Navy. He never discussed ‘Nam, but his love of his comrades and the Navy never wavered.

When he was diagnosed with cancer in 1994 he would go back to the reunions of the USS Pritchett crew. He even wrote a history of the ship for the Navy. It is in a naval museum today.

I say that John gave his life for our country. His cancer was caused by fuels and agents he absorbed while protecting us.

He, along with many on the Pritchett, left this earth long before we were ready for their commissions with us to be over.

For many years I wore a POW/MIA bracelet for another warrior named Maj. Robert Dyczkowski. These bracelets were worn by many of us to honor the fallen. They simply bore the name and rank of the soldier and the date they went missing.

When your soldier was found or set free you were to break the metal. To me that symbolized that the soldier was not bound any longer by shackles or life. They were found either on earth or heaven.

My bracelet is still intact. I wore it so long that all the hair fell off my arm. My soldier was never found.

The bracelet wound up with my doll in that safe drawer for over 40 years. Every now and then I would wonder about Robert Dyczkowski and hope that somewhere, someway, someday they would find this Air Force pilot and bring him home.

When I was married in 2005, my husband wanted me to have someone to help me clean our house. After a search I found Violet. She comes every two weeks. Violet came to the U.S. from Poland. She speaks perfect English, and I have watched her and loved her as part of our family.

One day, right before she was to arrive on her Thursday, my husband and I decided to create a wall of art in our dining room.

Most of the paintings were his and they had been scattered throughout the house. We hung them together on a high wall. We loved the new look, but there was a hole that needed something else. A narrow tall space requiring a “piece.”

I ran upstairs and got the doll and the POW bracelet.

“David, why can’t we put these together in a shadowbox and display them here?” I said, pointing to the odd space.

“I always wanted to take these out of the drawer, and now we have the opportunity to showcase them!”

After I picked the shadowbox up from the framer, I hung it immediately and it was just perfect. The doll with a metal band at her waist was now in an honorable place.

She was dusting in the dining room and admiring the gallery. I was getting ready for work.

I ran to her. The feather duster in her hand was held up as if she had frozen while staring at the shadowbox.

She could hardly talk, so I explained to her what the bracelet meant.

“No, no, you are not going to believe this!” she continued. “That is Robert Dyczkowski. He was found in 2001 and brought home. He is my husband’s uncle. He was promoted posthumously to colonel and is one of that last Americans from Vietnam to be buried in Arlington.”

I looked at her and she at me. From Poland to America to Vietnam to Georgia to a dining room. We both stared at the doll. Tears fell down my cheeks and I felt as if two fallen soldiers were standing right there, looking at two women completely aghast at the curious, mysterious junctions where lives meet and how. Suddenly it seemed as if the war was finally over. My soldier found.

Memories of war and those that served never should be tucked away in a drawer. On this Memorial Day we need to remember that old soldiers never die, nor do they fade away. They should always live on in the hearts and minds of those that they served and be forever honored.