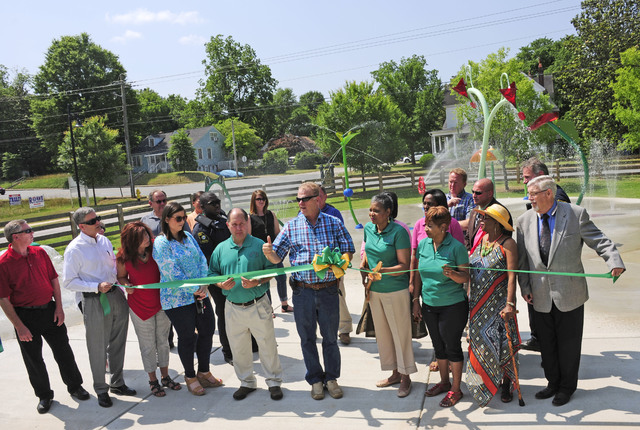 The features of the Splash Park spray and dump water as officials talk in the background.

http://lagrangenews.com/wp-content/uploads/sites/37/2016/05/web1_web0529SplashPark05.jpgThe features of the Splash Park spray and dump water as officials talk in the background.

West Point and chamber of commerce officials prepare to cut the ribbon on the new West Point Splash Park on Friday as the water features spray behind them.

http://lagrangenews.com/wp-content/uploads/sites/37/2016/05/web1_web0529SplashPark01.jpgWest Point and chamber of commerce officials prepare to cut the ribbon on the new West Point Splash Park on Friday as the water features spray behind them.

WEST POINT — Officials dedicated a new feature of West Point’s growing parks area on Friday, and had some fun getting wet in the process.

West Point officials and staff, along with representatives from LaGrange-Troup and Greater Valley Area chambers of commerce cut the ribbon on the city’s new splash park as water sprayed and splashed in the background. After the ceremony, a few — including Mayor Steve Tramell and Councilwoman Sandra Thornton — got up close and a little wet with the water features.

“This has been something in the planning for years that we’ve wanted to get done, and it’s a great use of the SPLOST (special-purpose, local-option sales tax) funds that truly benefits the whole community,” said Mayor Steve Tramell.

The addition expands on recent changes to the city’s recreation fields, now known as John Hogg’s Park, over the last few years — mostly SPLOST-funded. The park also ties into the River Park across the Chattahoochee and next to City Hall, which Tramell said is consistently drawing people.

“It’s amazing,” he said. “We haven’t been open a month and it’s every night — people are over there.”

Unlike the River Park, which is open daily, the Splash Park has limited hours. It will be open 11 a.m. to 5 p.m. on Mondays, Wednesdays, Fridays and Saturdays; and noon to 6 p.m. on Tuesdays and Thursdays. It is also aimed at younger children compared to the River Park, which welcomes all ages.

“All the above-ground features of the Splash Park have been designed for young children,” Trammel said during the ribbon cutting.

Tramell envisioned it as a place where younger children can come, cool off and have fun while older siblings play a ball game or the family picnics at the nearby pavilion. The Splash Park is accessible through the adjacent John Hogg’s Park free-play area.

“We’re just very excited to have this and look forward to doing more things like this for the residents of West Point,” Trammel said.

The West Point Splash Park is located at 1007 Avenue D, next to the ball fields. It is open to all children 12 years old and younger, and there is a $1 fee per person. Children must have adult supervision.